Reporters Notebook
The Cut
“The Cut” is a weekly reporters notebook-type essay by an Ideastream Public Media content creator, reflecting on the news and on life in Northeast Ohio. What exactly does “The Cut” mean? It's a throwback to the old days of using a razor blade to cut analog tape. In radio lingo, we refer to sound bites as “cuts.” So think of these behind-the-scene essays as “cuts” from Ideastream's producers.

I am one of those people who loves to set New Year’s resolutions, whether that’s trying to eat healthier, exercise more or stay away from social media.

I’m not the best at following through with resolutions, however. Last year, I resolved to read at least one book a month, but I ended up taking almost the entire year to get through the 1975 novel "Shogun" by James Clavell about an English pirate captured by samurai in 17th-century Japan. In my defense, the novel is more than 1,000 pages long, and that was a bit intimidating. It was a great book, which I highly recommend, but I don’t think I can quite call last year’s resolution a success.

I’m a firm believer in second chances, however, so this year I resolve to give myself a redo.

Luckily, this week, the “Sound of Ideas,” the daily morning public affairs show for which I am supervising producer, aired a conversation about the best books to read in 2023. The list was determined by a panel of local literary experts and bibliophiles, and there were many books mentioned that I want to check out.

I love mysteries, so I may start with “Wrong Place, Wrong Time,” the time travel mystery about a mother who tries to stop a crime her son committed. It was recommended by Akron-Summit County Public Library’s Christina Labib.

I was also intrigued by one of our listener’s suggestions to read the novel, “Horse,” by Geraldine Brooks, which uses the true story of a famous 19th-century racehorse to explore themes of slavery and present-day racism. That listener, Kevin from Cleveland, also mentioned that he reads at least 150 books a year, which made me gasp aloud in the control room.

Coincidentally, “Horse” also was one of the hardcover books Karen Long, the manager of the Anisfield-Wolf Book Awards, brought to the studio that morning to recommend. “I think there are very few people on this planet who can evoke Civil War times better than Geraldine Brooks,” said Long.

I’m also interested in revisiting the classics, so I might want to follow the suggestion more than one listener gave to reread Herman Melville’s whale-hunting adventure, “Moby Dick,” which I tried to read in high school, but never finished.

In a sense, reading more is my "great white whale." I may not get as far this year as listener Kevin from Cleveland, but if I can surpass what I read last year, that will be its own achievement.

What books do you think we should add to our New Year’s reading list? Send us your suggestion to soi@ideastream.org and we’ll add it to the website. 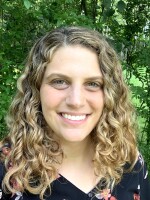