Reshaping the Corn Belt: Small Ohio farms a testbed for the future This is the second installment of Reshaping the Corn Belt: How farming is turning to the past to grow its future. Other stories with a focus on regenerative agriculture will be aired and published over the next few months.

Lucy Owsley and her husband, Eugene Goodman, pick tomatoes off the vine inside one of their high tunnels on their farm. They also have some rows of lettuce, mustard greens and red chard, although much of it won’t be ready until later in the winter.

Their adopted dog, Bubbles, lays on top a row of carrots, while Goodman isn't watching.

But the most important crop they have is the soil itself.

The couple runs Boulder Belt Eco Farms in Preble County. It’s a nine acre farm near the Indiana state border. They’ve made a living growing produce and selling it at a local farmers market for nearly 30 years. They also run a community supported agriculture program or CSA.

When they first got there in the fall of 2005 — after growing at another farm for about 10 years — the land was a pasture, and the soil was hard to dig into.

“The beds were horrible. You could barely get a shovel down more than four inches into these things,” Owsley said.

It took them years of composting and planting cover crops to encourage microbes and organic matter. The idea is to avoid disturbing the soil so that it becomes richer in nutrients and softer.

“The plants are taking up nutrients constantly through the years, especially when they go into a seed making stage. They really are hard on the soil,” Goodman said. “And anything you can mix back in the soil is going to help rebuild your soil.”

Walking around the farm, the couple pointed at the edge of their property to show the toll post-industrial farming has had on their land and their neighbors. The soil around the fencing has a slightly raised hump that tapers away from the fence. 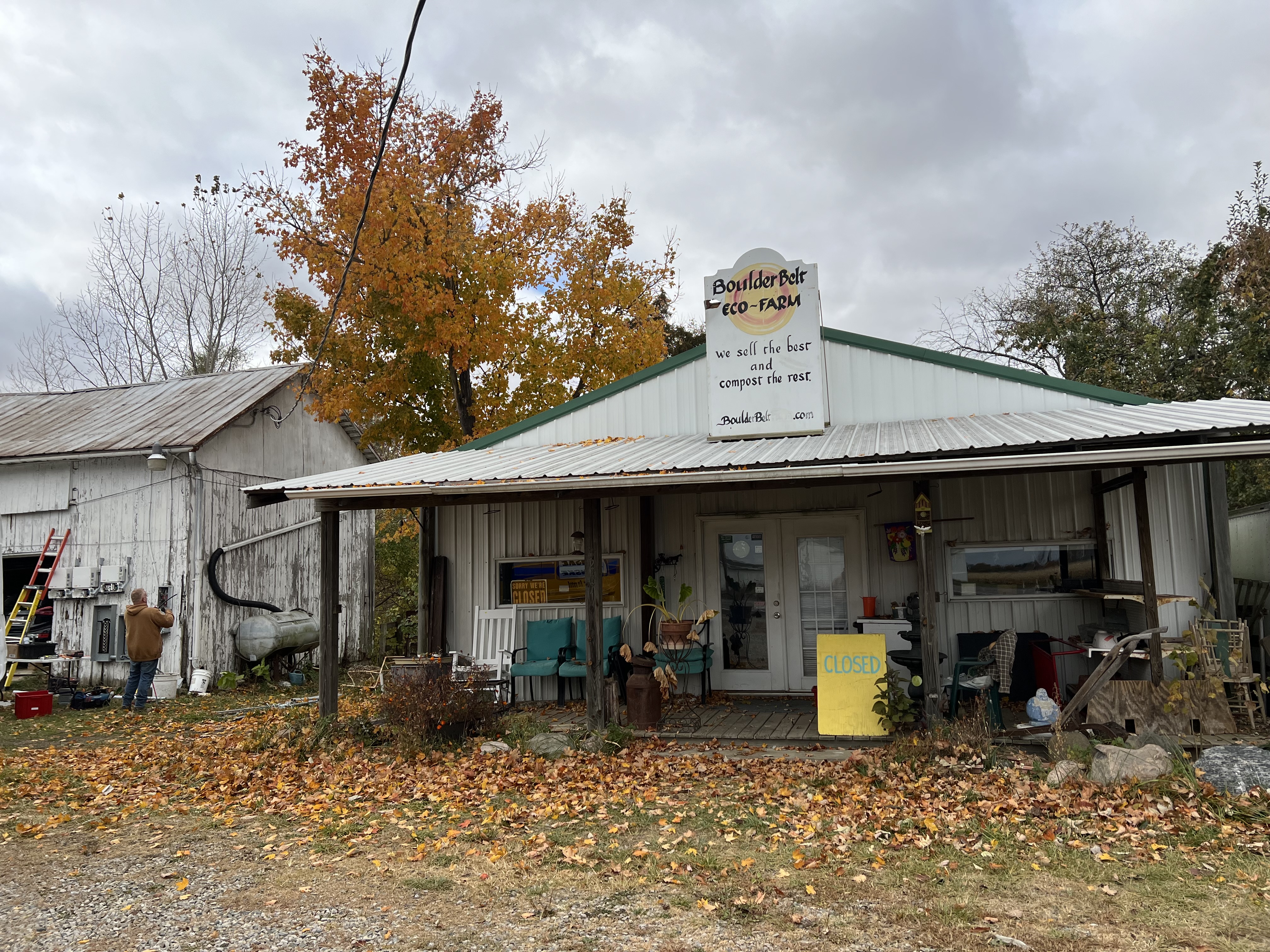 That’s the direct result of decades of plowing, Goodman said, and much of the topsoil has washed away to creeks and water tributaries.

For Owsley, she believes her job is to bring back much of the topsoil lost to industrial farming practices.

“We're trying to grow really nutrient dense food for our clients. And we're also trying to sequester carbon and grow good soil because it's the most important crop we have on this farm,” Owsley said.

The couple embraces regenerative agriculture — that means to work with nature rather than against it.

Their farm was organic certified by the Ohio Ecological Food and Farm Association before the USDA took over the certification process. Owsley said the process became too cumbersome and expensive.

Owsley fears regenerative as a buzzword might head the same direction as other labels such as natural, sustainable or organic. She worries it might lose its meaning and become just another marketing word for corporations.

“You do this because it's the right thing to do. You don't do it to make more money,” she said.

Historically, conventional corn and soy farms have been getting bigger across the Midwest. But Owsley sees small farming as a testbed for what the future of agriculture could be.

“Small farms are able to do regenerative agriculture really intensively and we can learn a lot more about what we're doing more quickly than the big guys can. We could be teaching them how to do this,” Owsley said.

Tia Stuart is growing regeneratively, too. About 40 miles east, she walks across a 128 acre farm in Yellow Springs through small garden plots and some patches of woods.

She passes fenced gardens with berries, some leafy greens, and corn, although most of it has died down as the chill fall weather settles in.

Stuart works at the Agraria Center for Regenerative Practices.

The nonprofit models regenerative practices, such as using cover crops, diversifying what they’re planting, not tilling the soil and not clear cutting trees. It focuses on ecosystem restoration, local food system support and research.

“We want to leave the soil in better condition than we found it. Like let's do away with the monocropping that has destroyed our soil and let's go back to the practices that kept the soil healthy." 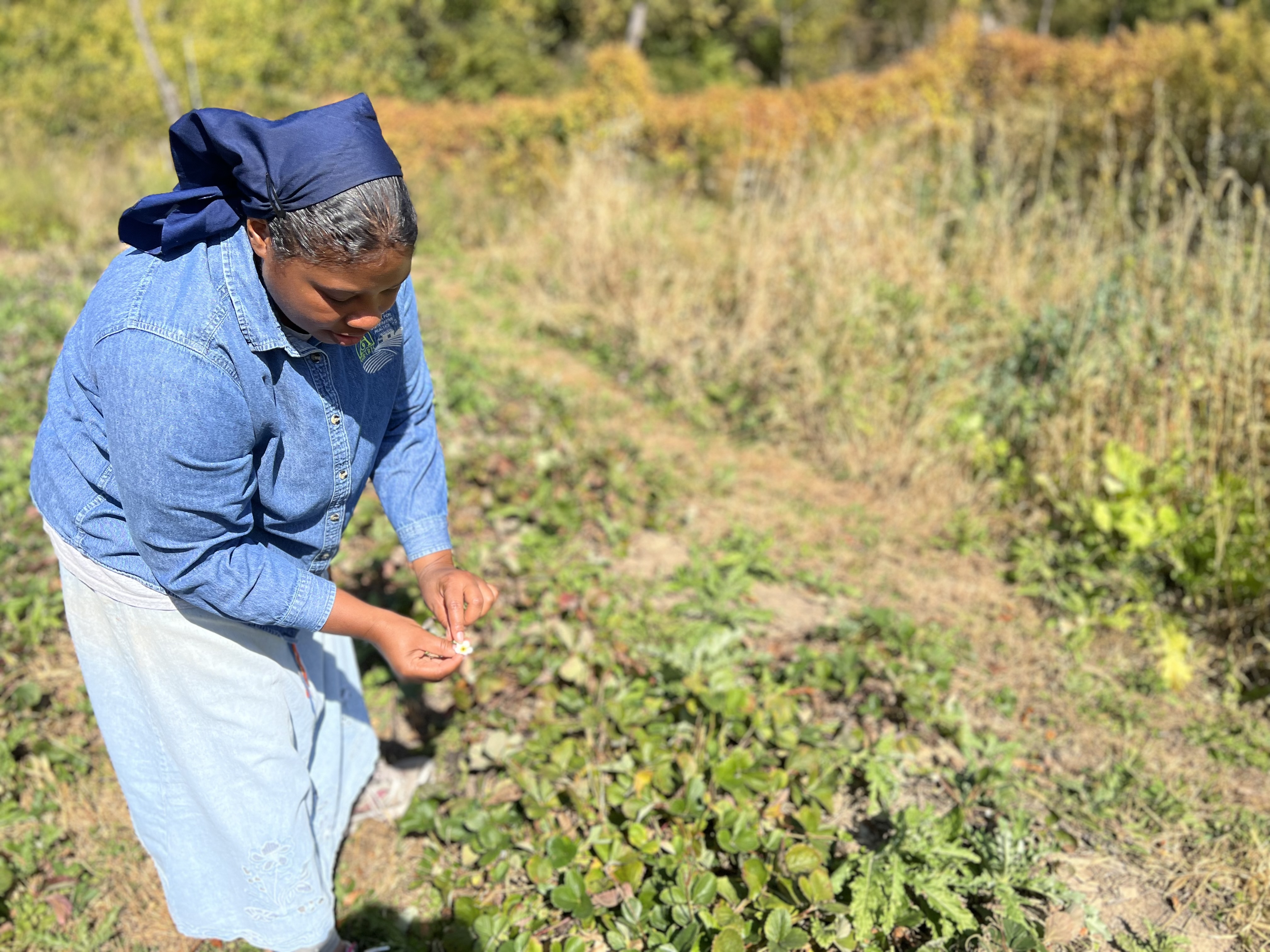 Experts caution that’s not a silver bullet to erase the climate impacts of agriculture, which accounts for 11% of carbon emissions, according to the U.S. Environmental Protection Agency.

But encouraging organic matter in the soil helps.

For Agraria and Stuart, regenerative means more than that. While the agricultural benefits are bountiful, social benefits also are critical.

“Just supporting aspiring farmers, farmers that want to learn regenerative practices, that want to help heal the land with a special emphasis on our BIPOC farmers,” Stuart said.

Stuart coordinates the Regenerative Farmers Fellowship at Agraria, a program designed to support and train beginning farmers, especially farmers who are Black, indigenous or persons of color.

Farmers of color have been pushed away through several generations through racially discriminatory laws. Ohio has thousands of farms, but less than 1% are Black owned.

Throughout the 20th century, discriminatory lending practices, particularly through the USDA, left Black farmers with few resources to sustain their land. A report puts the lost wealth and income from the land Black farmers once had at about $326 billion from the millions of acres they once had.

Stuart, a Black farmer herself, believes the future of the local food system will germinate from small farms working collectively in a way that doesn’t pollute the environment and doesn't degrade the health of the soils while also supporting Black farmers.

She said this work is also about food sovereignty, or guaranteed access to food for everyone, especially in underserved communities.

“Even though we might be a little removed, this is not new for our people. So my job, in my opinion, is to help remind people, bring them back,” Stuart said.

And most of all, for Stuart and Owsley, regenerative farming is about feeding their communities. Not only with healthy fruits and vegetables, but with healthy soils.

The practice is catching up, albeit slowly. Owsley acknowledges it can be expensive for conventional farmers to adopt some of the practices. Switching equipment and trying out a new farming process is challenging, she said.

Goodman added too much is at stake not to do something to keep the soil that remains to farmers.

“We're trying to set an example and show people this can be done,” Goodman said. ”Something grown in the right environment where the soil is alive and everything's working together, it can really benefit the whole vegetable and the people eating it.”

Alejandro Figueroa is a corps member with Report for America, a national service program that places journalists into local newsrooms. Support for WYSO's reporting on food and food insecurity in the Miami Valley comes from the CareSource Foundation.