Tina Boyes, head of the Kenmore Neighborhood Alliance, has been working since 2017 to make Kenmore Boulevard exciting again. For every new business, there are still spaces like the former Hairston Appliance store that’s quietly waiting for a new tenant. Boyes began consulting with Dallas-based Better Block five years ago on how to make the boulevard more walkable. They added bike lanes. They filled a vacant lot with art and turned it into a courtyard for community meetings. And then she came to a realization: Kenmore is a music neighborhood.

“We've got recording studios, [and] we've got the two guitar shops directly across the street,” she said. “The Rialto Theater [is a] regional music venue.”

“Why couldn't we take a vacant space and every couple weeks have an event that just happens to be two days long and has local artists playing?” Boyes said.

One of the spaces they used for the events has a vintage, art deco “Live Music Now” sign out front. When lit, people know to come in. That building will soon be the new home of Buzzbin, a well-known DIY and punk venue that recently closed its doors in Canton. The move is happening with support from another music venue, the Rialto Theatre, just a few blocks away. In 2010, brothers Nate and Seth Vaill began converting the Rialto from a derelict movie house to a music venue.

The Vaills are hosting a benefit for Buzzbin on September 24, and the new club plans to open near Halloween. Vaill says it will be good to have another venue for people to visit after a show at the Rialto, but the neighborhood needs more bars and restaurants.

“I want to walk along this boulevard and see people on Kenmore Boulevard at 10:30 at night,” he said. “I don’t want people to leave our place and then just leave the boulevard.” 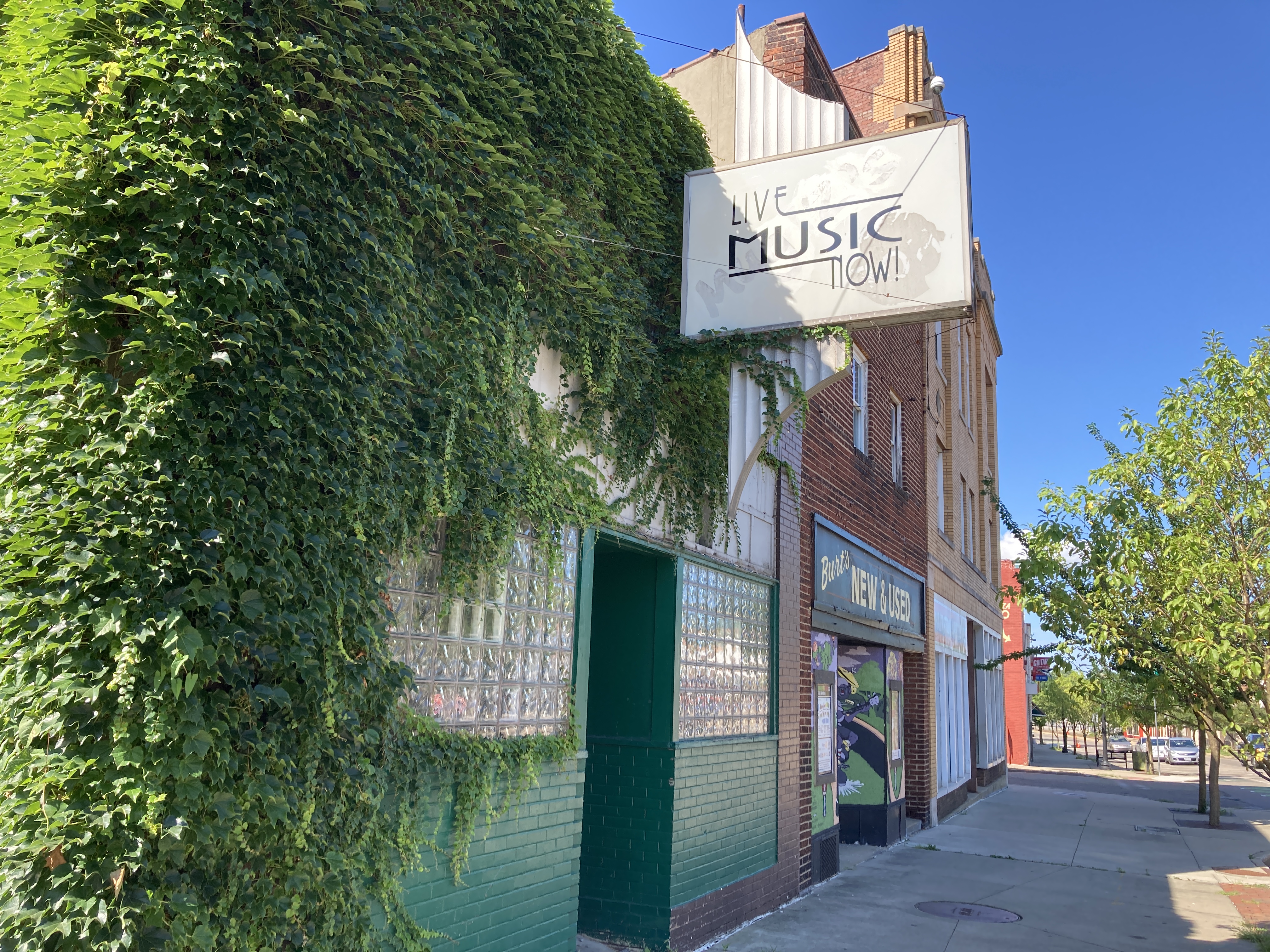 The new home of Canton's Buzzbin is one of the spaces which was reactivated for temporary arts events by the Kenmore Neighborhood Alliance. The art deco sign currently on the building dates back decades. [Kabir Bhatia / Ideastream Public Media]

A few doors down from the Rialto, Dan Shinn owns Lay’s Guitar Shop.

“My gut feeling is, this is going to become Music Row,” he said.

Behind the shop, a narrow strip of roadway is where guitars are constantly being picked up or dropped off for repair. Earlier this year, the city renamed that street “Virgil Lay Way.”

“I would say the bulk of my customers are probably anywhere from a half-hour to an hour-and-a-half away,” Shinn said. “I have a lot of guys that come from Michigan [and Pennsylvania]. I'd say the largest per-capita group of guys that come in here that are really good guitar players almost always are from Youngstown. It's something in the water.”

Upstairs from Lay’s is the Loft, run by Steve Givens. It’s a cozy space with enough hardware on the walls that if every member of the Cleveland Orchestra suddenly dropped by and wanted to buy a guitar, they could do so – for a price.

“The Smithsonian recently did an article on the tree mahogany — this is from that tree,” he said. “The next one that I have ordered, I just got the retail price on it, is $22,000. This wood adds about $8,000 to the price of this guitar because it's so rare.”

While most of Givens’ business is online, he says they still host visiting musicians who sometimes take a piece of Northeast Ohio with them. The Loft has a 1953 Les Paul Gold Top finished with wood from a demolished Goodyear building. 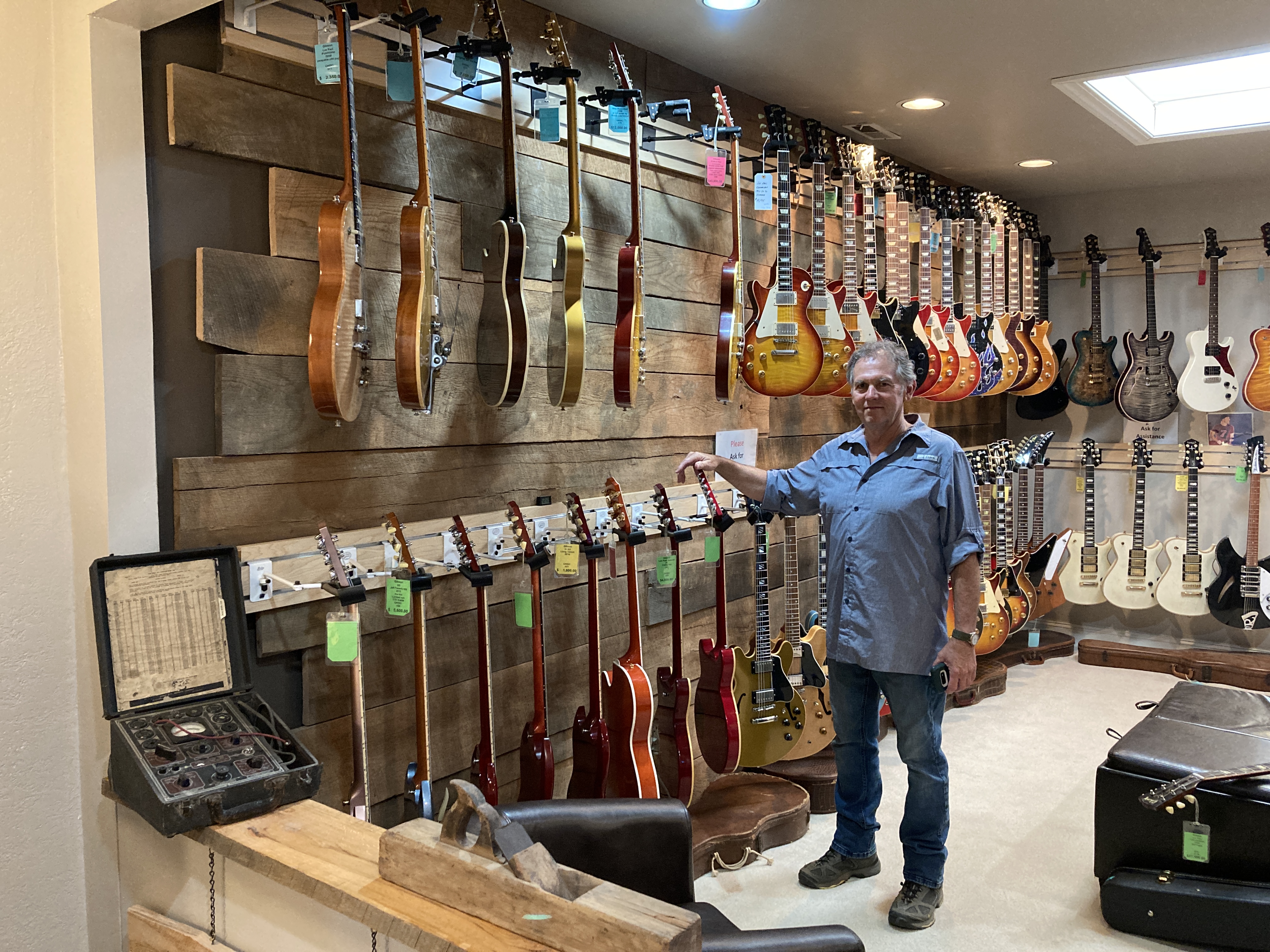 Steve Givens runs the Loft above Lay's Guitar Shop. He says much of his business is online, but there are still people who visit in-person to pick out an instrument. [Kabir Bhatia / Ideastream Public Media]

The inventory at the Loft complements the shop next door, the Guitar Department, owned by Ed Michalec and run by his son, Quinn.

“Every age group comes in looking for something completely different,” he said. “Teenagers and younger people [have] shifted from guitars a few years ago to now, oddly, bass guitars. And ukulele has taken over a big chunk of the younger sales we do.”

The Guitar Department was originally across the street when it opened in 2009. But they strategically moved next door to Lay’s a few years back.

As Tina Boyes with the Kenmore Neighborhood Alliance surveys the street, she notes that some of the guitars from those shops end up in recording studios on the boulevard.

“We have seven down here now, and there’s three or four just in this block,” she said. “On the corner is the former Cook’s Hardware Building. That’s a live room downstairs and the acoustics are amazing. If you’re walking up and down here, you can hear drums being recorded there at all hours.”

Thom Tadsen owns the studio in the former Cook's building and is currently working with Griphook (and its drummer, Wachovec). Tadsen said the addition of Buzzbin to the boulevard is going to be "huge" and is "exactly what we need."

From rock to hip-hop

Drums are as essential to rock and jazz as they are to hip-hop – which is also getting its due in Kenmore. Ben White runs hip-hop nights at the First Glance Urban Youth Center in Kenmore and said that in 2019, he “met a group of eight to ten young rappers. We basically had a Wu Tang Clan of Akron. I’m like the Old White Dude: OWD.”

Although he grew up in the ‘90s listening to grunge and classic rock, he sensed there was an opportunity to connect with youth through hip-hop.

“We found out that it was a really therapeutic thing and helpful to kids to come in and just express themselves,” he said. “It’s like music therapy for them.”

“There’s a lot of social-emotional learning happening,” he said. “Telling people how you’re feeling about something is normally stigmatized. In hip-hop it’s okay to communicate [your heart and mind].”

White is expanding the camp to a weekly, Friday night free-for-all at the Akron Dream Center in Firestone Park, since it received a grant for a state-of-the-art recording room. Boyes wants to attract those kinds of grants and businesses to Kenmore. 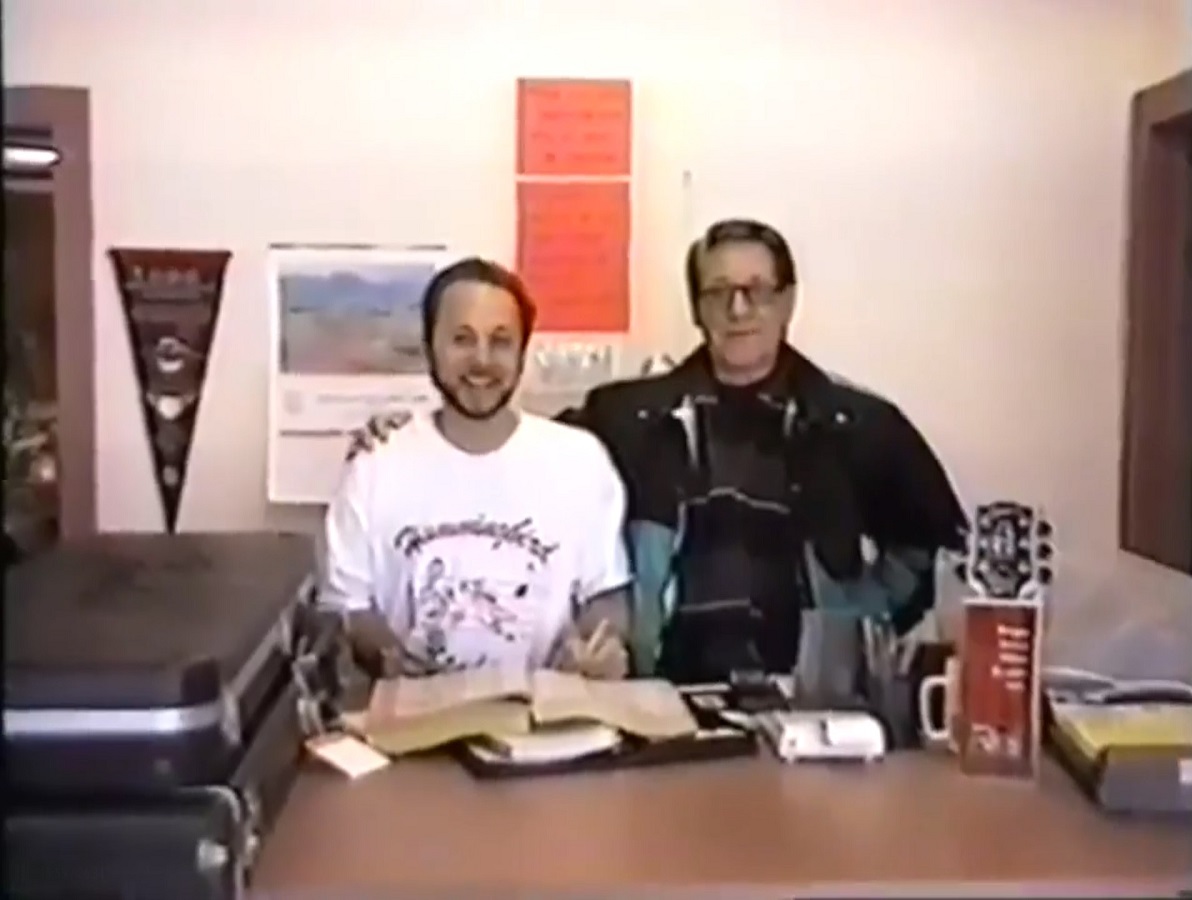 Boyes grew up in Kenmore, where her father owned a dry-cleaning business. She said recent development in Highland Square is an example of what could happen in her neighborhood.

"Think back 25 years ago, Highland Square wasn't getting a Chipotle. That was a process. I don't think we want to necessarily mimic what Highland Square did, but that gives us hope that some of these music-oriented businesses [are] going to attract food someday.”

Boyes said the neighborhood wants to stay true to its working-class roots, but her surveys indicate residents also want to see more restaurants and places to eat.

Maybe Kenmore Boulevard will someday be as lively as it was when former Kenmore activist Cletus Swords was growing up in the 1940s. He reminisced about it in a 1997 documentary on how to work with young people in an area suffering from economic decline and rising crime.

That documentary was made 25 years ago by Jim Ballard, one of the musicians who has been working with Tina Boyes. He’s lived in Kenmore since 1977.

“[Boyes] brought in business leaders, political leaders, foundation folks, all the entities you need to make these kinds of things happen,” he said. “Uniquely, she wanted to include artists and musicians from the beginning and take seriously their input. That's what's made the things that have been happening in the last five or six years on the boulevard happen."

The Kenmore Neighborhood Alliance is celebrating five years of its work with Better Block on Friday, September 2. It's part of the neighborhood's ongoing First Friday series with pop-up shops, visual art, food and of course music. Boyes said they will also have "compare and contrast" demonstrations showing where the boulevard was five years ago.

From closures to new ways of working, independent music...