Why Is Utility-Scale Solar Coming To Ohio? Good Land And Plenty Of Demand Ohio has a lot of cleared, flat land that has been used for farming over the past two hundred years. Most of that land also gets good sunshine. Those factors have caught the attention of companies who want to harvest that natural energy and sell it onto the power grid in the state's deregulated electricity market.

This potential solar development could provide a scaled-up approach to putting more renewable energy on the grid in a state where coal-fired electricity power plants are rapidly closing.

Innergex is a Canadian renewable energy company that is developing solar farms in Ohio. One of their facilities, The Hillcrest Solar Project in Brown County, is only the second in the state to be fully constructed and operational as of this summer.

In the middle of the project area next to a humming inverter on a sunny summer day, there are black, high-wattage panels stretching in every direction—panels that are produced just a few hours away in Toledo by a burgeoning company called First Solar. The panels follow the sun from east to west throughout the day to maximize efficiency. 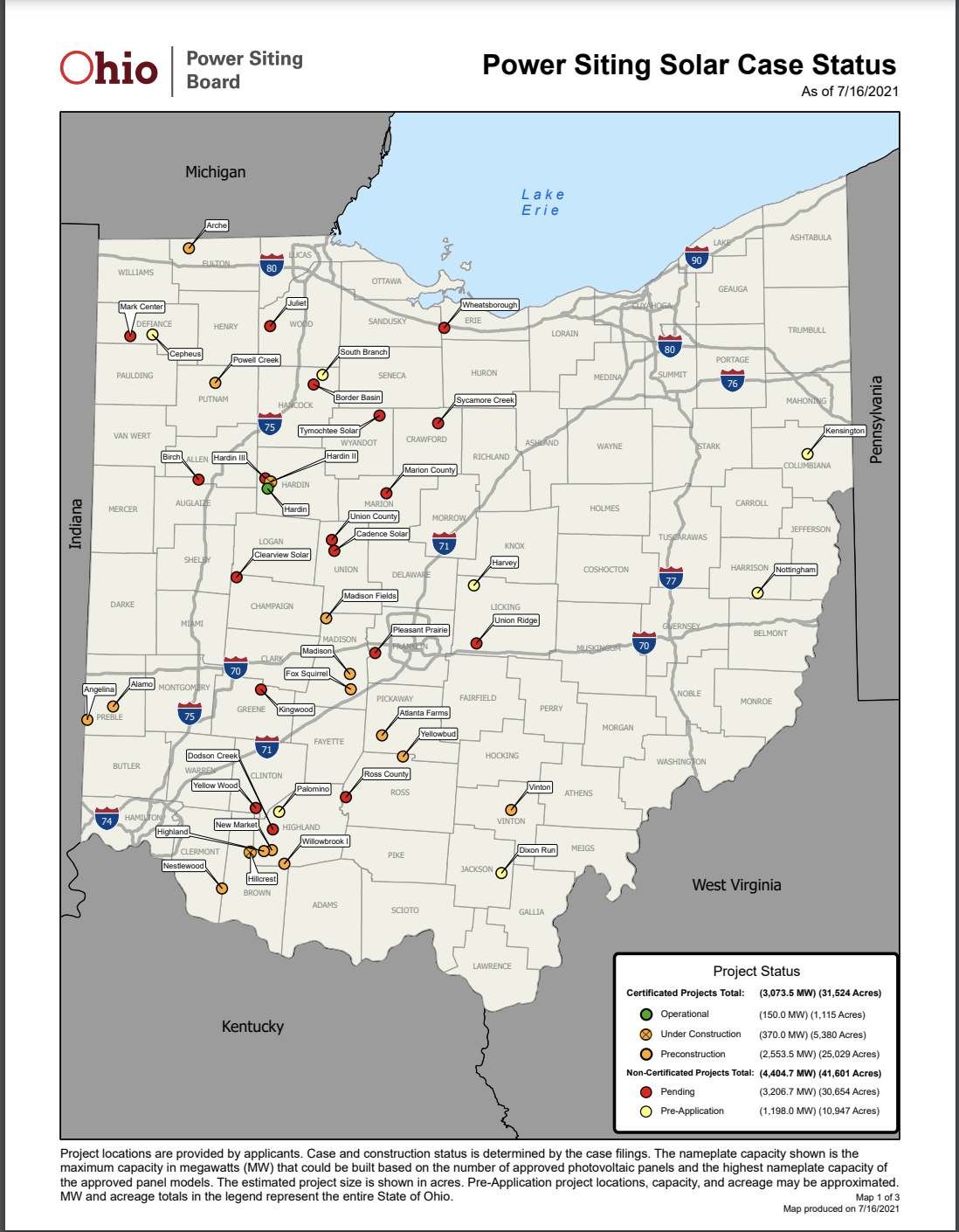 The thousand acre-plus Hillcrest operation can produce enough electricity every year to power almost 40,000 homes. The huge utility transmission lines that run above the facility can connect the energy produced there to the regional grid, potentially serving millions of people.

Bill Behling is the Director of Development for Innergex. He started his career in the coal industry.

“No emissions, no CO2 or sulfur dioxide or nitrous oxide, mercury, all those pollutants that are in fossil fuel plants, none of that is here," he said.

Land resources and infrastructure are just a few of the reasons companies like Behling's are looking at building utility scale solar farms in Ohio. There is one more big economic reason: corporate demand.

“So much of this is driven by the corporations and their sustainability goals," Behling said. "What I call the top five, the big five data centers, Amazon, Google, Facebook, Microsoft and Apple. They are all going one hundred percent renewable energy.”

Big, Fortune 500 companies partner with solar developers to sign something called a power purchasing agreement. In essence, the companies agree to purchase all the power produced by a solar farm like Hillcrest for around fifteen to twenty years at a fixed price. The PPAs provide a steady flow of income for the solar companies, and it offsets the corporations’ fossil fuel usage at their big facilities like data centers and factories.

Steven Shparber is an attorney and member of the Environment, Energy & Natural Resources group for the law firm Clark Hill. He is based in Washington, DC and has worked for a number of renewable energy companies. He said the PPA model helps developers get initial financing to build new utility scale solar farms, which can be expensive.

"It allows the developers of these projects to go to a financier to say 'Here's a power purchase agreement. It's Company X on the other side and they're good for it because they're a large tech company, or they're Ford or they're an industrial customer. So please lend us the money to build the project.'"

But it isn’t just big corporations signing power purchasing agreements. The City of Cincinnati recently agreed to a twenty year contract worth more than $125 million. It will power 100% of Cincinnati's electricity consumption for all city-owned and -operated services. In an interview, Cincinnati Mayor and Ohio gubernatorial candidate John Cranley said a power-purchasing agreement became the clear choice a few years ago as he looked for the best way to make the city carbon neutral.

"Economically, solar makes the most sense when you have a very large piece of land that's flat, has access to the sun obviously, and you get economies of scale,” he said.

Cranley said that by locking in a rate for the next 20 years, it is estimated Cincinnati taxpayers will save $1.8 million over the life of the contract. Beyond the economics, Cranley said the New Market Solar Project in Highland County will help combat climate change.

"I think that what's important is putting on as much clean energy as we can," he said. "Adding solar is going to pay huge dividends to everybody as you turn on electricity, if a growing share of that electricity is coming from cleaner sources.” 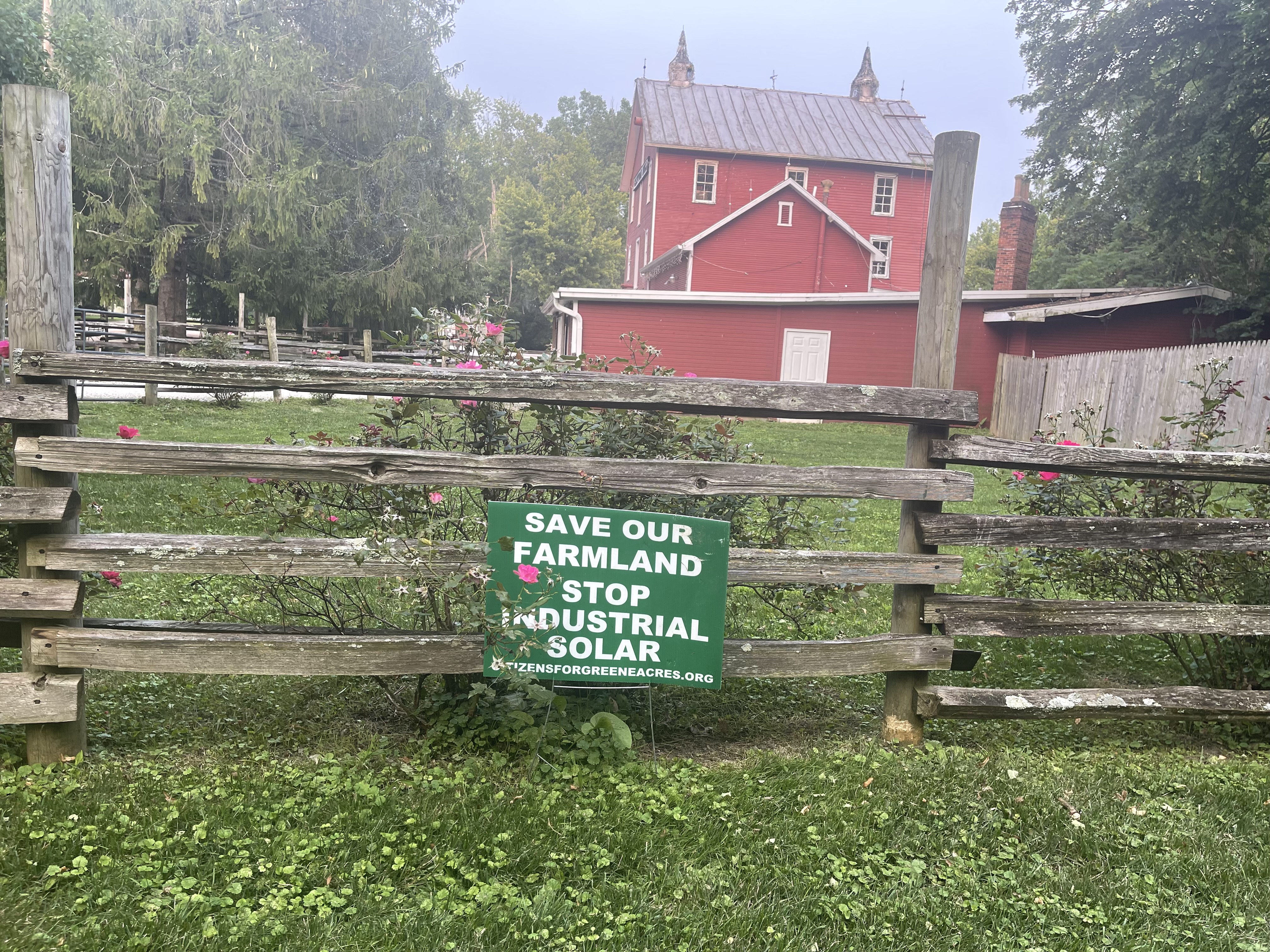 A sign in front of the Historic Clifton Mill in Greene County, Ohio.  [Chris Welter /  WYSO]

Nonetheless, there is a certain amount of fear and uncertainty surrounding these solar projects in the local communities where they are being built. People have been putting solar panels on their roofs for a long time, but scaling up to the utility level is a different ball game.

Behling from Innergex lives in the Northeastern United States but said that he has been in southwest Ohio during fifteen of the last nineteen weeks. He said part of his time in the state has been meeting with a number of landowners who have concerns about the new developments.

Grassroots groups against utility scale solar farms have formed in Darke, Greene and Preble counties. Throughout those rural areas you can find lawn signs with slogans like “Say No To Solar” or “Save Our Farmland Stop Industrial Solar.” Some are also worried about their property values.

Utility Scale Solar development is uncharted territory for Ohio. As of this month, there are only two utility solar facilities in operation. But numbers from the Ohio Power Siting Board suggest there is a boom on the horizon. There are currently forty solar farms in the pipeline or already being built.

In the next part of WYSO's series on solar energy in Ohio, Chris will be looking at the battle lines that are emerging around utility-scale solar.

Environmental reporter Chris Welter is a corps member with Report for America, a national service program that places journalists into local newsrooms.