The Child Tax Credit is helping Clevelanders, but some families have missed out The variety of things Cleveland-area residents have spent - or could spend - the Child Tax Credit on. People we interviewed who received the advance payments said they spent it on food, transportation, utility bills, clothing and a few board games. People who had not yet received it said they would spend it on school supplies, food, and one woman said she would spend it on things her son needs, who has Cerebral Palsy. [John Shiner / ] As a mother of a 3-year-old child with cerebral palsy, Dortilia Jones had plenty of things she could be spending the monthly $300 federal advance Child Tax Credits on.

There’s only one problem: The Internal Revenue Service (IRS) never sent those payments to her. That’s money that could have helped the Maple Heights resident buy things her family needs.

It can be expensive raising a child with a disability. Her son, Dre, needs special shoes to go over the braces he wears on his legs, for example, and clothing and food are also a priority. She said she’s hopeful that Dre ultimately will be able to walk on his own, but doctor’s appointments also aren’t cheap.

“It (payments) would be going to something important, trust me,” Jones said.

Jones’s family is one of an estimated 116,500 families in Ohio – more than 4 million nationwide – who did not automatically receive the advance child tax payments, according to an estimate from the Center on Budget Policies and Priorities. The federal government implemented the payments earlier this year as a part of the American Rescue Plan.

The one-time advance payments are substantial and represent the first time the Child Tax Credit has been given to families in this way in the U.S. These expanded benefits were touted by U.S. President Joe Biden’s administration as having the potential to cut child poverty in half, meant to help the country’s poorest families make ends meet. The expanded benefits would also be extended into 2022 if Congress approves the Build Back Better Act, but that now looks unlikely with West Virginia Senator Joe Manchin signaling he’s a “no” vote.

Roughly 35 million families in the U.S. automatically received the $250- or $300-per-child advance monthly installments between July and December. And the data that has trickled out so far shows that the payments have significantly helped families struggling to make ends meet, reducing food insecurity and leading to a roughly 25% drop in child poverty in the U.S.

However, at a special event hosted at A Touch of Rain Nail Spa in the Larchmere neighborhood in September, the Northeast Ohio Solutions Journalism Collaborative and A Greater Buckeye found multiple Cleveland-area residents – most of them single moms – who did not receive the benefit. These moms had their manicures paid for as they talked with reporters and got advice from a local expert on the tax credit.

Kayla Minor, a Larchmere resident, is one of those parents. She said she ended up being audited by the IRS after her mom mistakenly claimed Kayla’s 2-year-old daughter on her taxes last year. So, she hasn’t received the advance Child Tax Credit payments or any of the stimulus checks. 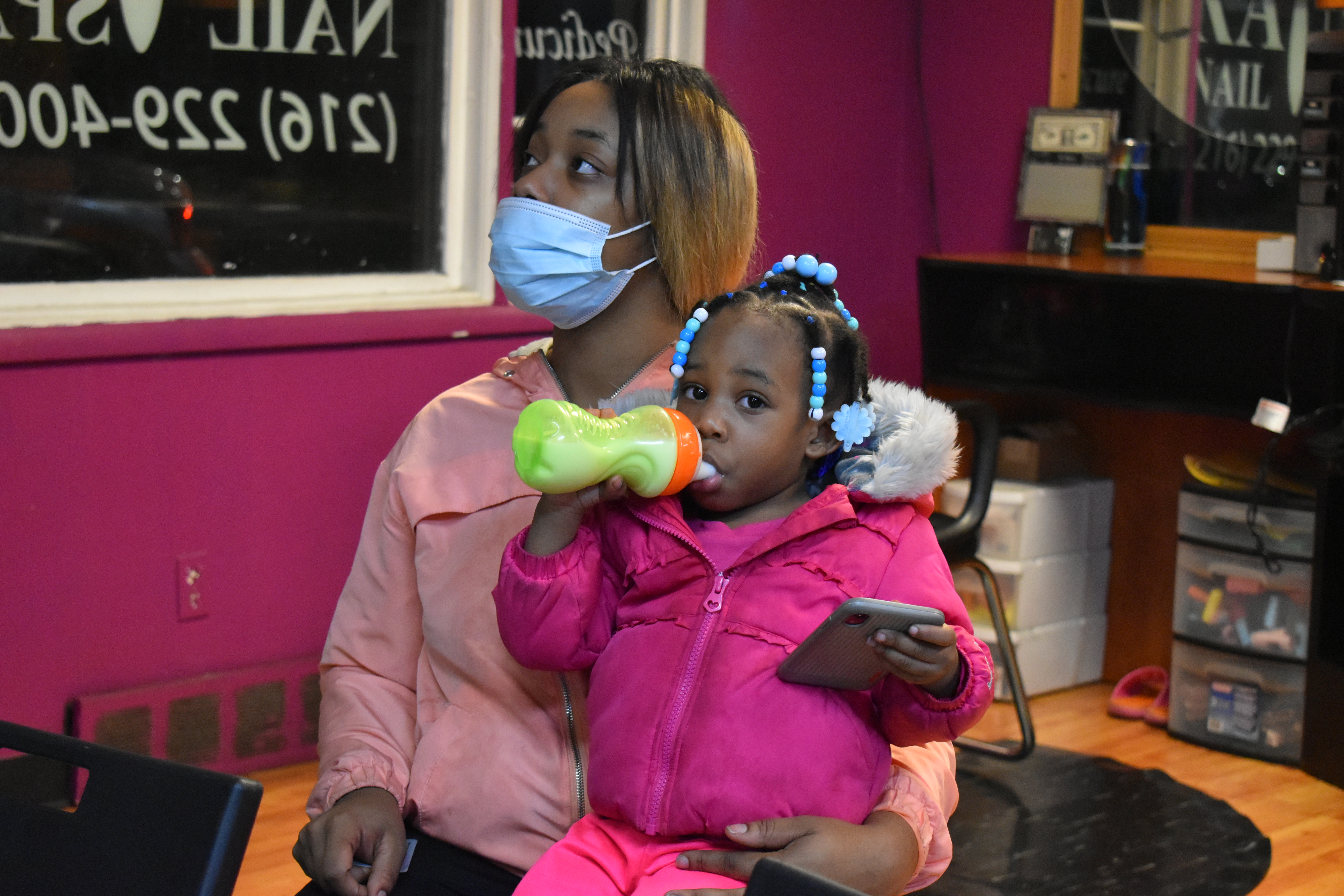 Kayla Minor, a local home health aide, sits with her two-year-old daughter A’Riyah as she learns about the Child Tax Credit during a November event at A Touch of Rain Nail Spa in Larchmere.  [Conor Morris  /  NEOSOJO]

Minor said that money would help with necessities for her daughter, A’Riyah–from school supplies to clothing to diapers.

“Right now I’m potty training her,” she said. “It’s not hard anymore, but I’ve got to keep spending money on Pull-Ups … they’re so much money for so little, only 11 in a pack.”

Tax credits have lifted some Clevelanders up

The advance payments have been a significant boon for other area residents, however.

Angie Bordeaux, a Bellaire-Puritas resident, has been juggling multiple jobs during the pandemic, on top of raising her 7-year-old son. Currently, she’s a sales associate at Target, a bartender and a special needs therapist, working well over 40 hours a week.

She said the extra $250 per month she’s been receiving through the Child Tax Credit has been “significant” for her little family. It’s helped her buy groceries and pay for transportation since she doesn’t drive. While she uses the bus plenty, Bordeaux said sometimes she needs to rely on rideshare options like Uber because the public transit system in Cleveland is “unreliable.”

The tax credit in general has helped her fill in gaps, she added.

“I know that once the 15th hits, I have that money to fall back on if my finances are not in check,” Bordeaux said.

D.J. Lockett, a Kinsman resident, similarly has tried to be smart about how she uses the advance Child Tax Credit payments. She’s been saving the money to create a more sizable down payment for a home for her four children who are in their teens.

On top of raising her kids, Lockett also runs a health and wellness company and works full-time for Cuyahoga County. She said she’s very careful about budgeting for food and living expenses, but added it’s nice to have the extra Child Tax Credit money available to pinch into if she ends up needing it.

The most common uses of the tax credit among Ohio families between July and August of this year were on essentials: food, bills, clothing and rent. That’s according to an analysis of Census data by the Social Policy Institute at Washington University.

Why aren’t some getting it?

Yvonka Hall, executive director of the Northeast Ohio Black Health Coalition, has become an expert on the expanded Child Tax Credit benefits over the last six months. She came to Touch of Rain Nail Spa in November to educate people on how to apply for the benefits if they hadn’t yet received them, days before a deadline loomed to access the advance payments. 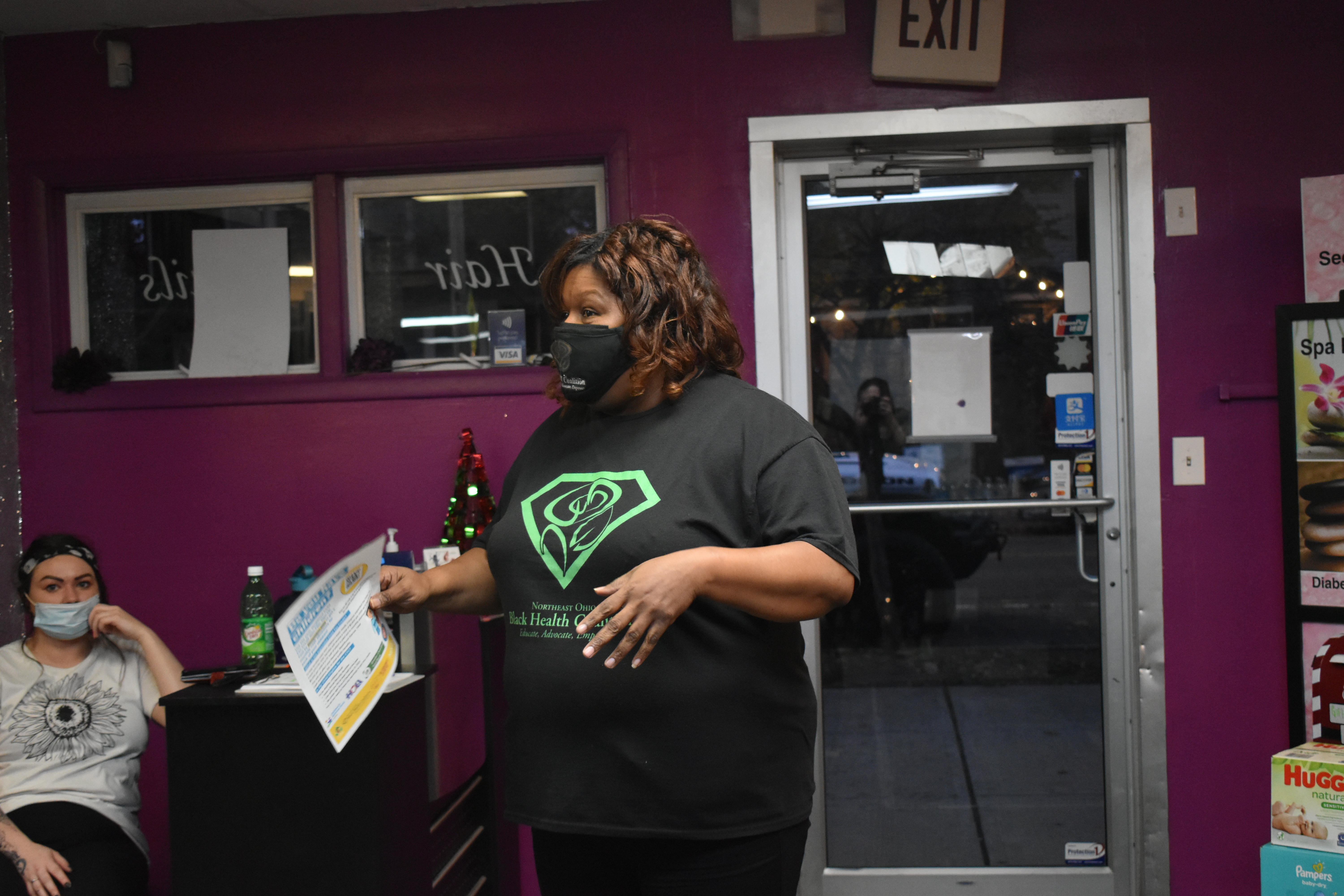 “It’s been a game-changer for many people,” Hall said. “It can help change their living conditions, being able to get clothing for their kids, or (address) the fact that food prices have gone up a lot.”

But Hall said there are plenty of falsehoods circulating about the Child Tax Credit. For example, many families do not realize they are still eligible for the advance payments even if they are receiving other government assistance, she said.

To make matters worse, Hall said she’s talked to some people who still haven’t had their tax returns processed from 2020, leading to a delay in receiving the advance child tax payments.

“When they’re putting their social security number into the IRS form, it’s saying they’re still working on it,” Hall said. “My taxes from 2019 – not 2020 but 2019 – were just processed recently.”

IRS spokesperson Eric Smith said his agency is still trying to staff up to reduce the amount of time it takes to process income tax returns.

Alex Coccia, a senior policy analyst at the Center for the Study of Social Policy who has studied the Child Tax Credit, said the number one reason why several million people did not receive the advance payments is because they had not filed taxes in the last year or two.

That includes multiple vulnerable groups of people: Immigrants who are hesitant to give the government information for fear of being deported, or were unable to file their taxes due to language barriers; low-income people who fear they’ll have to pay the money back; as well as the parents of children born in 2021 who were unaware they need to update their information through the IRS’s update portal in order to receive the money.

Coccia also said that majority-Black communities are sometimes more subject to auditing by the IRS, which can further hamper confidence in the system and cause delays for people in cities like Cleveland.

Hall said that there were several missed opportunities along the way to help people access the Child Tax Credit payments. She said information should have been conveyed directly to the people who most need the help.

But it doesn’t have to be that way, she noted.

Because a family can receive the entire tax credit once they file their 2021 taxes, Hall said, there now needs to be a concentrated effort to get people to file their taxes next year. She said the local libraries, the local school systems, Cuyahoga County Job and Family Services, and local nonprofits should all be pushing that message out as best they can.

Advocate Coccia said the expanded version of the program should become permanent, pointing to other countries like Canada that have seen significant results in reducing poverty through expanded child tax benefits.

“Another thing that has got to go into any legislation is support for navigators, and support for community organizations that are doing that type of outreach,” Coccia said.

Senator Manchin has previously signaled that the Child Tax Credit is one sticking point for him with the Build Back Better bill, suggesting it be tied to some sort of work requirement.

However, a Columbia University study found “statistically insignificant impacts” of the CTC on caregivers’ participation in the labor force, meaning it has not discouraged them from going to work.

This story is a part of the Northeast Ohio Solutions Journalism Collaborative’s Making Ends Meet project. NEO SoJo is composed of 18-plus Northeast Ohio news outlets including Ideastream Public Media. Conor Morris is a corps member with Report for America, and Rashida Adbulhaqq is a Glenville-based freelance writer with FreshWater Cleveland. Email Conor at cmorris40@gmail.com