The village of Peninsula’s downtown sits in the Cuyahoga River Valley. Yet the area’s geology prevents many parcels from finding adequate well water. [Mark Urycki] The towpath trail, the Cuyahoga River and the Cuyahoga Valley Scenic Railroad all run through Peninsula and Boston Twp. [Mark Urycki] A former Boston store and apartment house belonging to John Krasinski's uncle is now the Boston Mill Visitor Center and a stop for the Cuyahoga Valley Scenic Railroad, which marked its 50th anniversary in April. [Mark Urycki] Part of a mill, canal lock, and towpath bridge over the Cuyahoga River in downtown Peninsula. The busy parking lot is owned by the national park. [Mark Urycki] Peninsula was settled in 1818 as the Ohio Canal was opening. The village contains homes in styles from Colonial to Greek Revival to Victorian. Residents hope to keep its historic character. [Mark Urycki] Peninsula and its two main roads to Akron, Riverview and Akron-Peninsula roads, are a favorite route for cyclists. Slower bikers like to ride the parallel Ohio Canal Towpath. [Mark Urycki] Mother of Sorrows Catholic Church. Peninsula was once a thriving city where canal boats were built. In the 1970s the federal government bought 306 of its 750 homes to create a national recreation area. Many of the structures were burned down. [Mark Urycki] The village of Peninsula has long had a love-hate relationship with the national park that surrounds it.

In the 1970s the Cuyahoga Valley National Recreation Area used its eminent domain powers to buy up more than 300 homes from the 750 in the village and Boston Township. The national park now completely surrounds the village, and some friction remains. But a new era for the towns is on the horizon.

Many people in Peninsula and surrounding Boston Township can trace family roots back for generations. They can point out old family houses or shops that are now owned by the Cuyahoga Valley National Park.

For Peninsula Mayor Dan Schneider, both sets of grandparents lived around the valley.

“Truxell Road is named after my great grandparents,” he said.

Boston Township was settled by many Polish families. Peninsula Councilman John Krusinski grew up there.

“The one that they turned into [the Boston Mill Visitor Center], that was my uncle's house,” he said. Before the park, Boston Township was mostly a quiet space beneath the traffic of the Ohio Turnpike and I-271 passing overhead.

“We were this little forgotten town, and the bridges would go - cars would run 24 hours a day across that. They never even knew we were down there. And it was just a beautiful, beautiful place. It was our Mayberry,” the councilman recalled, comparing Boston Township to the fictional town of The Andy Griffith Show. “And, unfortunately, the government took it away from us.”

The superintendent for the national park today, Lisa Petit, understands the creation of the park almost 50 years ago was “traumatic” for residents.

“I will admit mistakes were made,” she said. The concrete arches of I-80 cross above Boston Township and the Cuyahoga Valley. [Mark Urycki]

Those old wounds reopened last September when the Conservancy for the Cuyahoga Valley National Park announced it had purchased the closed Brandywine Country Club golf course and would transfer all but 15 of the 207 acres to the national park. Snow covers the closed Brandywine Country Club in January. The Conservancy for the Cuyahoga Valley National Park, which purchased the golf course, plans to transfer most of the land to the national park. [Mark Urycki]

Peninsula Mayor Dan Schneider called it the last large piece of developable land in the village.

“That’s a 12-14% loss in what the available land was taxable which now puts us, what, probably about 50% of our village is now non-taxable,” he said.

Actually, 54% of Peninsula is now owned by the park.

The village has only about 560 residents, but on a peak day as many as 7,000 visitors come to the national park and most of them will at least pass through Peninsula or Boston Township.

“We often say if the village could get one dollar from every visitor, wouldn’t that be wonderful,” said Karen James Walters, the executive director of the nonprofit Peninsula Foundation. “And I have to say, the park might say the same thing.”

Just ask Page, Arizona. That small town owns land that leads to the popular Horseshoe Bend in the Glen Canyon National Recreation Area. The city owns the parking lot and charges $10 per car for the two million visitors each year.

The Cuyahoga Valley National Park has no entrance fee.

Peninsula Councilman John Krusinski says being surrounded by the park can be a burden.

“Inadvertently that requires the villages and the small towns to be the infrastructure for that park,” he said. “You know, it's our roads. It's our fire protection, it's our police. And that's okay, because we have to do that anyway. But the problem is when they're buying up properties and removing the tax base from the property taxes, because once the government owns it, there's no taxes paid.”

The village council passed a resolution in November saying the Brandywine sale would cause “irreparable harm” and asked for “a portion of the property to go into private ownership.”

Councilmembers envisioned something like a commercial winery for the property.

That didn’t happen but park Superintendent Lisa Petit says federal parks do compensate local governments for the first five years after buying land through the Payment In Lieu of Taxes Program.

Such payments are generally sent to the county. Krusinski says the village currently receives $4,618.50 per year and Boston Township gets $23,644.44 from the program.

“It's still not the amount you would get from residential development,” Petit said, “but nonetheless, the village does receive payment in lieu of taxes.” The village has been looking for other sources of funding. Mayor Schneider says an entertainment tax is an option, and the town has begun charging for street parking.

“If we're averaging $2,000 a month we didn't have before, [for] some villages that wouldn’t make a difference,” he said. “But that might be the difference of us being able to give an officer a raise or someone to retain them.”

Also on the table is an entertainment tax for local shows and possibly for people riding the Cuyahoga Valley Scenic Railroad, which uses Peninsula as the “North Pole” during its popular “Polar Express” excursions, now called North Pole Adventure. A very old problem for citizens of Boston Township and Peninsula is the valley’s geology. Many of the homes and businesses can’t get water from wells.

Twentieth century artist Honoré Guilbeau told WKSU in 1994 she moved her lithography studio to Peninsula for the quality of the water. But while one house may have a spring, its neighbor may rely on a cistern.

“The reality is we have our water brought in from Akron on a truck,” said Karen James Walters, “and it's expensive and it's inefficient, and you run out of water when grandma's staying the weekend.”

“One of them, the Winking Lizard, actually bought one of the trucks and they hauled daily to themselves, and I believe Alexander Water hauls to Fisher's daily when it's open,” Schneider said. “So, our main two restaurants have to have water hauled in from the city of Akron, technically, to be able to operate.”

The lack of water and space for septic systems have led some companies to move out of town. A furniture store moved out because it didn’t have the volume of water needed to operate a sprinkler system. The picket fence between the train depot (left) and PurpleBrown Farm Store is hiding a wastewater treatment plant. Several businesses in the village own and operate such package plants. [Mark Urycki]

“This is something that the village could never afford,” Krusinski, who teaches environmental policy and is a consultant performing environmental studies, explained. “We’ve been in violation of the Clean Water Act because a lot of our buildings were built 100 years ago, and a lot of the septic systems have failed and they're just not working. So, the EPA years ago sent us, you know, the letter saying that we're in violation. And to be honest with you, there was nothing that we could do.” What else could go wrong? In 2020, erosion along the Cuyahoga River forced a main highway, Akron-Peninsula Road, to close. The village could not afford to fix it. The cost was close to Peninsula’s entire $1.2 million annual budget.

And that’s when fortunes turned.

Summit County officials arranged for a $1 million grant from the Ohio Public Works Commission to repair the road. And they kept going, using funds from the American Rescue Plan Act for a long-needed wastewater plant.

“They helped us out in the opening of Akron-Peninsula Road which, you know, we are thankful, so very thankful,” Mayor Schneider said. “And then, on our behalf, there's like $7.5 million set aside to help the village of Peninsula for water and sewer.”

A new wastewater plant will be built on village property and a study is underway to bring in water, most likely from the city of Hudson.

Park Superintendent Petit says the park will find the money to help.

“It is my commitment and my mission to reinstate that flow of funding,” she said, “specifically for road repair and for emergency services assistance.” Lisa Petit, superintendent of Cuyahoga Valley Nationa Park, at the CVNP headquarters in Jaite. Jaite was a paper mill started in 1905, and a half dozen of its yellow worker homes are now owned by the park. [Mark Urycki]

And while they don’t have to, Petit says the park could tap into the new water and wastewater system to help share the cost.

“It's a very popular area for our visitors,” she noted. “And it's a very beautiful, picturesque village. And what I'm hoping is that with the water and wastewater, their commercial district and their village can be better equipped to, for want of a better word, take advantage of all those people coming through.”

Some residents have long been concerned that city water lines would lead to a rush of unwanted development. Lifetime resident Karen James Walters is not one of them. “My family is six generations Peninsula. I think our town motto is, ‘Quietly resisting change,’” she laughed. “We don't really want a lot of change. We don't want a lot of development.”

The Peninsula Foundation that Walters leads owns 20 properties in the village, and she thinks growth can be done without harm.

Coincidentally, the first page of the 1974 document creating the national recreation area argues the park is needed because “the loss of unspoiled land, as the suburbs of both Akron and Cleveland encroach on the area, and as the valley becomes more accessible for commercial developments, is an increasing threat.” 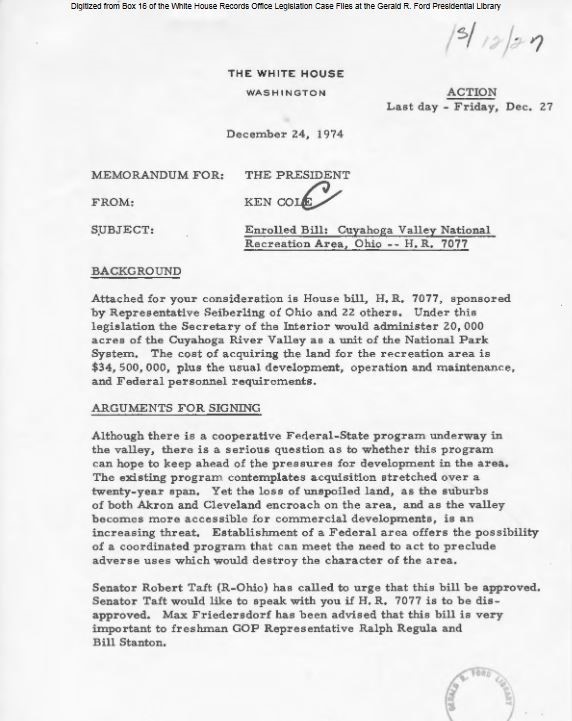 “Their childhood memories and their memories of youth, the way Peninsula looked and the landscape around it have been preserved because of the national park. It's hard to imagine what didn't happen but this would have been nonstop, wall to wall, valley wall to valley wall, residential development,” Petit said.

Peninsula officials want to avoid the growth of dollar stores and drive-throughs in its quaint downtown. They have recently developed a design overlay and are tightening the zoning regulations to withstand any harm to its historic character.