Marvel’s ‘Blade’ is coming to Cleveland – but who is he? The next superhero movie to shoot in Cleveland was supposed to start production in November – until director Bassam Tariq dropped out in September. Many production crewmembers pivoted to other projects, but “Blade” is still projected to come here early next year.

It’s a reboot of the Wesley Snipes “Blade” films released from 1998-2004. The character is a dhampir, meaning he’s part vampire. And yet he’s working to rid the world of vampires – a classic superhero conflict.

“He inherited characteristics of vampires, but none of the weaknesses,” said comic book expert Michael Sangiacomo. “He can walk in the day. He has super strength healing ability, like Wolverine. He can't transform into a bat or anything like that, but he's got super agility. He's a fascinating character.”

Sangiacomo has been writing about comics for three decades, mostly for the Cleveland Plain Dealer. He also created and wrote "Phantom Jack," the award-winning “Tales of the Starlight Drive-In” graphic novel and is currently working on another graphic novel, "Chalk."

He said Blade was the first supernatural Black character to fight street crime. The idea grew from the changing social norms of the 1970s. But Blade is also a product of the Comics Code Authority, which was overhauled in the early ‘70s. Before that, it limited the content in comic books under the guise of being a kind of “seal of approval” for parents.

Blade debuted in 1973 and has mostly been a supporting player, only headlining his own comic books around the time of the Wesley Snipes films. Sangiacomo says that might actually be why he’s being rebooted now.

“I think it's just cyclical,” he said. “I think people are always looking for something new and people have a very short memory. So, after about 10 years they say, ‘Blade? Oh, that guy is new.’ I think now there's definitely a large influx of minority characters in the movies. So, I think his time was coming. And I'm fascinated to see how this fits in, because they're not telling us anything about the new movie.”

And that means it’s difficult to predict where in Northeast Ohio the film will shoot.

“Blade fights were always in weird places,” he said. “In a forest where he sneaks up on a vampire and there are no people around, so nobody gets hurt. Who knows? I can't wait to see the locations.”

Many of the “Blade” locations will likely be recommended by Bill Garvey, president of the Greater Cleveland Film Commission. He can’t say exactly where the film will shoot, but it’s going to be a substantial production when shooting finally begins next year.

“I've been all over the country doing this work,” he said. “It was only when I got to Cleveland that I found this amazing place that combined everything from an incredible array of diverse architecture and topography [with] great logistics and great cost structure. All of that, in combination, is why we're here. A track record of great success manufacturing amazing award-winning movies.” 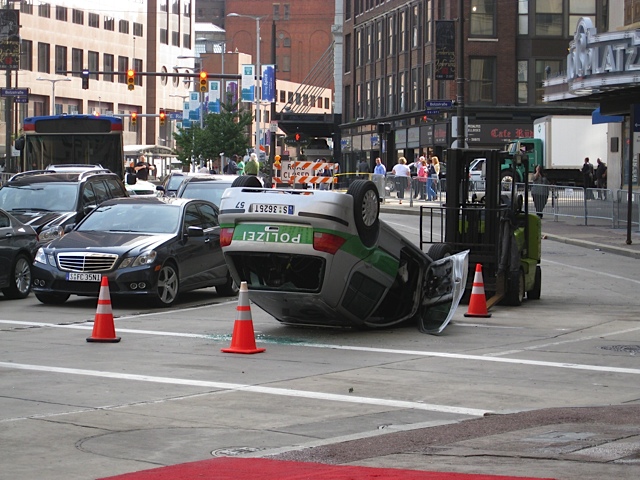 'The Avengers' shot in Cleveland in 2011, one of the first major movies after the state established a tax credit for film production in 2009. [Bob Burford / Ideastream Public Media]

Garvey uses the term “manufacturing” deliberately, since he sees film as an economic driver on par with the region’s industrial manufacturing of the 20th century. He and his predecessors at the film commission tout the refrain: To bring in more productions Ohio needs to expand its tax credits for filmmakers.

“Last year, we had $190 million of direct spend in the movie business in the state of Ohio,” he said. “At the same time, we turned away $224.5 million worth of projects that applied and were denied because our tax credit was capped at $40 million a year.”

A large portion of that cap was awarded to “Blade.” Garvey is hopeful that Senate Bill 341 and House Bill 599 will expand that cap and film production in Ohio. Currently, both proposals are in committee and have been there since this past spring.