Despite The Pandemic, Virginia Beach Remembers A Mass Shooting Julie Braley found comfort in the “VB Strong” stickers that showed up in business and car windows around Virginia Beach in the wake of the coastal city’s tragic mass shooting last year.

“It was nice to see that community coming together to support each other and kind of put their arms around each other in that kind of way,” she said.

Braley works in the city’s Parks and Recreation Department and was on the city committee that spent months organizing plans for the city’s public memorials. She wasn’t in the building at the time of the shooting.

This year, Braley hopes a new symbol — a forget-me-not flower — will help create the same connection.

The one-year anniversary of the May 31 shooting is in the middle of a statewide stay-at-home order issued to curb the spread of the coronavirus, forcing the city to change its memorial plans. Because of the coronavirus outbreak, the events marking one year since the shooting will be solitary, virtual or in small groups. Instead of coming together to grieve, the community is looking for other ways to remember the victims.

The city will host an online event on the anniversary itself. In the days leading up to that, the city is encouraging residents to wear blue, create door and window displays featuring forget-me-nots, observe a moment of silence and light up their homes and businesses with white or blue lights.

“We know some people are not comfortable with going to the Municipal Center, they don’t want to see Building 2 [where the shooting took place],” said Braley, who was part of a city committee that had been working on memorial events since last fall. “But we wanted to create a space where they could also go and be part of this event.”

The city is creating several memorials, including one at Mount Trashmore, the city’s largest park.

City workers painted a massive stylized forget-me-not overlooking Interstate 264. Anyone driving toward the resort beach will see it. The flower is composed of 17 shapes – one for each person killed or injured in the shooting. 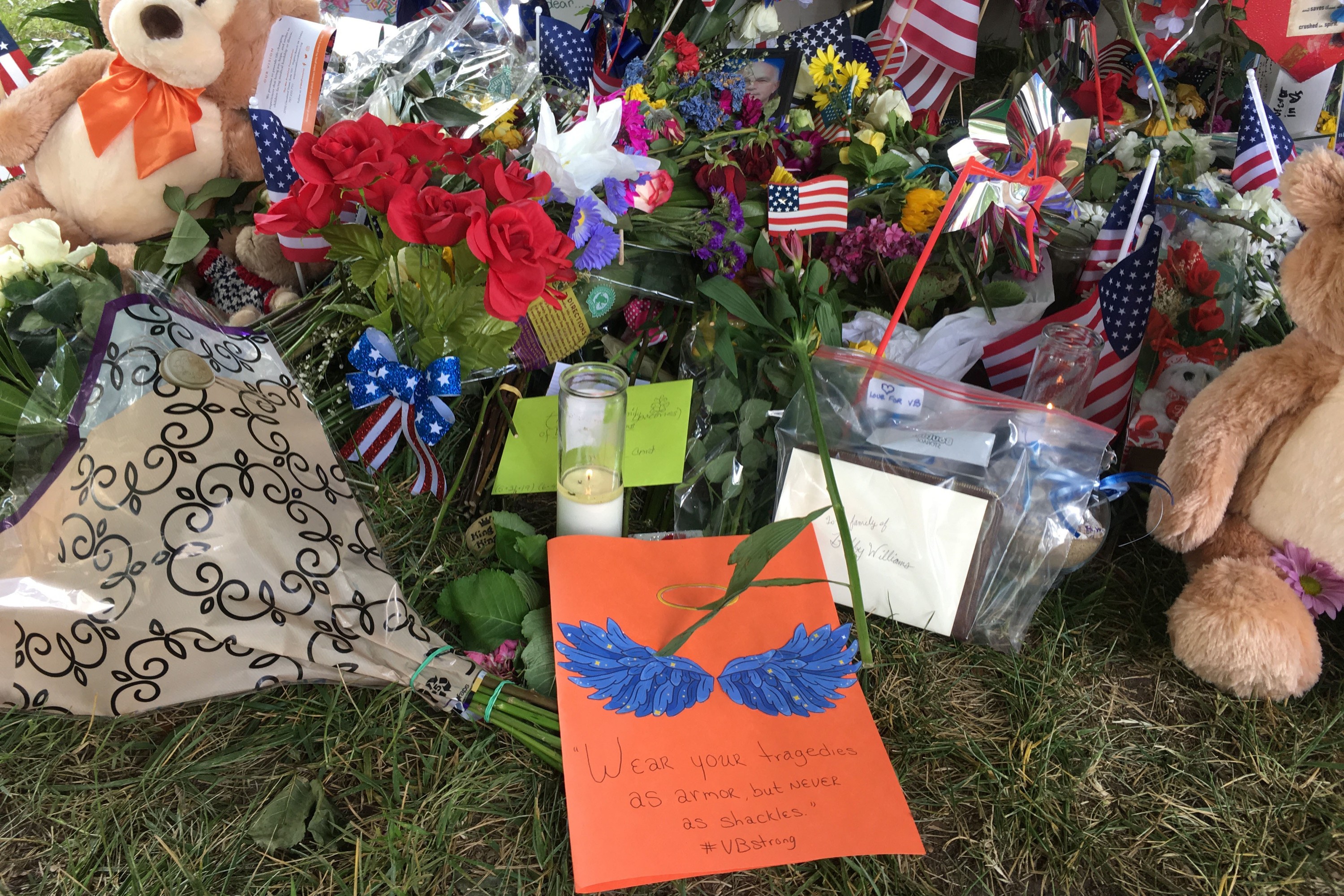 Mourners created this memorial last year near the site of the mass shooting.

It seems like most people know someone who was in, or supposed to be in, Building 2 when the shooting happened.

It started around 4 p.m. on the Friday after Memorial Day, the unofficial start of summer in the beachside city.

An employee in the city’s Public Works Department resigned in a short email that morning. He continued his workday and returned from an appointment that afternoon. He brushed his teeth in the bathroom, as he normally did, then went to his car to retrieve a handgun and suppressor.

He shot one person on his way in. He then proceeded to shoot 16 more people, killing 12 of them. The ordeal was over in an hour and a half, when a police officer shot and killed him.

It was a tragic outlier for a community with one of the lowest crime rates among similarly-sized cities.

Hundreds showed up to a memorial service at a church in the wake of the tragedy. Weeks after that, when some employees returned to a different building on the municipal campus, high school students lined the sidewalk along the way with encouraging signs.

Within days, Virginia Gov. Ralph Northam called for a special legislative session to push for new gun regulations. Republicans in the state legislature had a small majority and blocked the gun control bills.

Months later, Virginia Democrats won a majority in both chambers of the General Assembly for the first time in almost two decades.

The Virginia Beach shooting made that power shift possible, said Andy Goddard, legislative director for the Virginia Center for Public Safety, a group that wants to strengthen gun control laws. He’s also the father of Colin Goddard, who was shot during the 2007 Virginia Tech shooting.

“Yes [the special session] was a failure,” Andy Goddard said, “but boy, I think it really galvanized voters and next thing you know, we have control of the House and the Senate, who have a much different view on gun safety.”

Earlier this year, Democrats passed a suite of gun control legislation — including bills that require background checks on all gun sales, allow localities to ban weapons from events and government buildings, and reinstate Virginia’s one-handgun-purchase-per-month law.

Goddard said it’s unlikely any of the new laws could have stopped the Virginia Beach shooting. 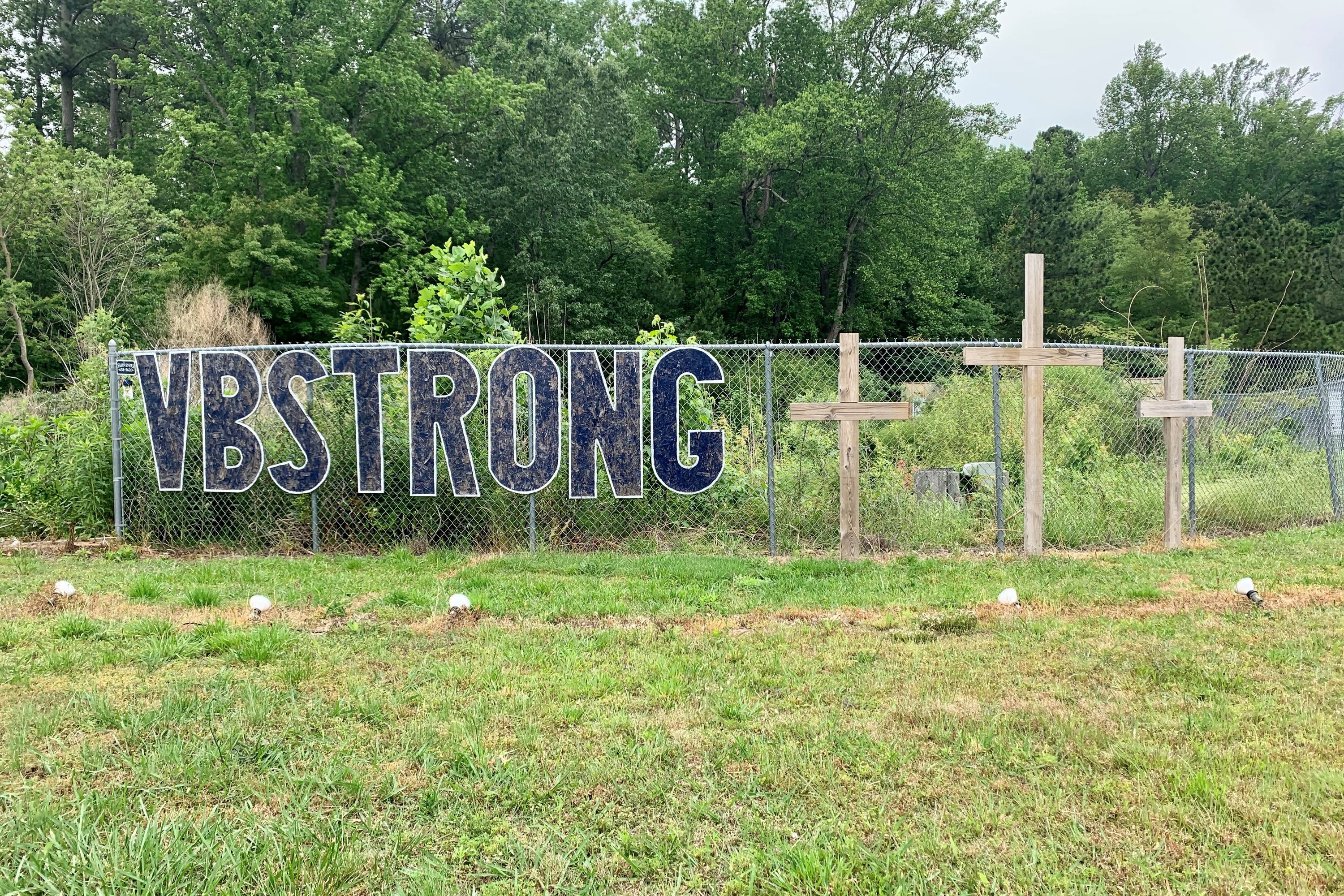 Signs like this one at Courthouse Community United Methodist Church in Virginia Beach are still in place to honor victims of last year’s mass shooting.

People work through trauma in different ways, said Laura Wilson, a psychology professor at the University of Mary Washington in Fredericksburg. Some may have channel their grief into political activism, some people organize events, some retreat into themselves, while others seek solace in people who can relate to their experience.

“Anything a person can do to create meaning around a loss can be vital to getting their life back on track,” she said.

But any of those things is likely more difficult in a pandemic.

“As you start to put additional stressors on people who are already struggling, that’s only going to further impact their mental health issues,” Wilson said.

Recovery is slow, acting City Manager Tom Leahy said in an email. He was a deputy city manager at the time of the shooting.

“Time is helping, but recovery takes years, not months,” he wrote. “With respect to the workforce, the four Building 2 departments are still struggling with temporary quarters, distance from the complex, and vacancies. The public may not be aware that they are operating far from normal efficiency exacerbated by COVID-19.

“For the surviving victims and the families of all the victims, recovery is a much longer, much tougher journey, also compounded by COVID-19.”

The city committee planning remembrance events wanted to create a spectrum of events to meet people wherever they are in their grieving process, Braley said.

Virginia Beach officials are still working on developing a permanent memorial. There are plans to reconstruct the building where the shooting took place, and the design process is scheduled to begin this year. It’s not yet decided if the new building will include a memorial.

The entire process of creating a memorial could take years, Braley said.

Mechelle Hankerson is a reporter at WHRO Public Media in Norfolk, Virginia.