Cleveland's Central Neighborhood To Get 'Surge' Of Support, But Will It Be What Residents Want? Cuyahoga County Executive Armond Budish and other local politicians caught an earful when they gathered at a shopping plaza in Cleveland’s Central neighborhood in mid-August to discuss a “surge” of funding to address poverty and inequity in the area.

Budish said some early ideas for that surge, defined broadly as a large infusion of money and support at one time, include working with the city on a $5 million renovation of the Central Recreation Center, with new basketball and tennis courts; improved access to affordable high-speed Internet; and planting 100 new trees.

But neighborhood residents who gathered in the plaza’s parking lot said these ideas didn’t meet their needs. Christopher Thorpes, a Promise Ambassador for Central, said there are more important issues that need attention first.

“I think everything that y’all got going on here, it is a nice gesture, but we don’t have a grocery store here,” he told officials. “There’s a lot of gun violence going on right now. That’s what we need to talk about.”

Thorpes said it’s been five years since the Dave’s Market, which had been located in the shopping plaza, left, leaving the neighborhood with few places to buy fresh food. Meanwhile, the majority-Black neighborhood on Cleveland’s East Side has an almost 70% poverty rate, according to 2019 five-year Census estimates.

Budish, during his speech, described the surge as a “pilot” model, a new way to bring resources, many that already exist, to bear in a community that needs the help. If all goes well, this method could be used with other neighborhoods in the city and county, he said. 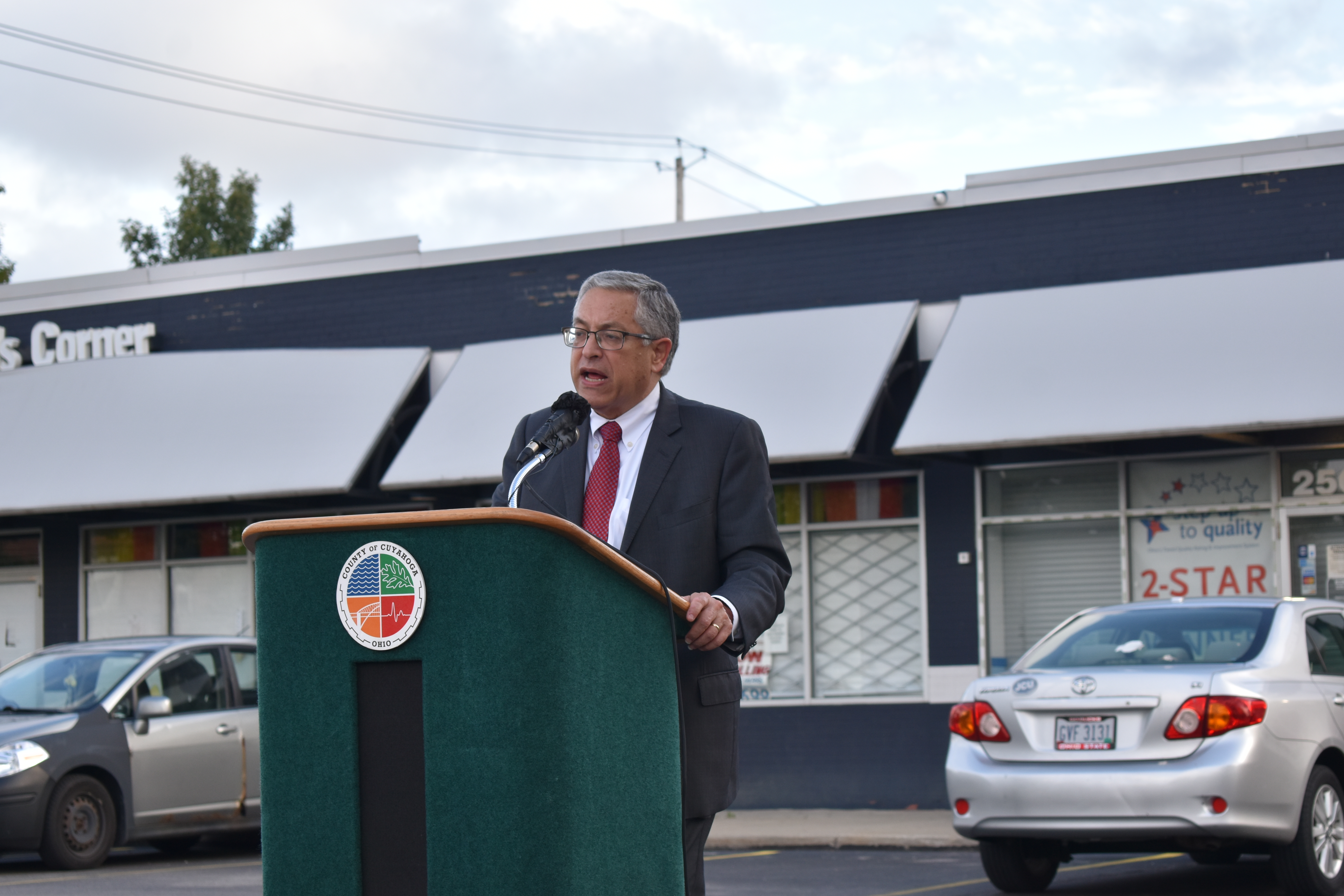 However, Budish, who will be facing a re-election fight in 2022 if he chooses to run, for months had given few details about how much money is available through the surge, or even when it could be distributed, or to whom.

That changed Sept. 9 when the county announced $330,000 in funding, part of a $600,000 investment from multiple entities, in partnership with Cleveland nonprofit DigitalC to build out Internet infrastructure to cover 70% of the Central neighborhood. According to a county press release, more than half of the households in Central are without Internet access.

Editor’s note: We plan to follow along with this story as plans develop. Got a tip? Email conor@thedevilstrip.com. Got thoughts on what your own neighborhood needs to thrive? Take our survey.

Returning to the meeting, local childhood advocate Ashley B. (don’t forget the “B”, she told officials) called Budish’s plans “irrelevant” to the reality people face daily in Central, arguing that a significant effort is needed to help residents recover from trauma they’ve experienced in the neighborhood.

“It’s nice and stuff, but it’s like putting a Band-Aid on a wound,” she said. “We need to mentally help them (residents). You can’t put nothing nice in a community and expect the people who have mental disorders to take care of it.” 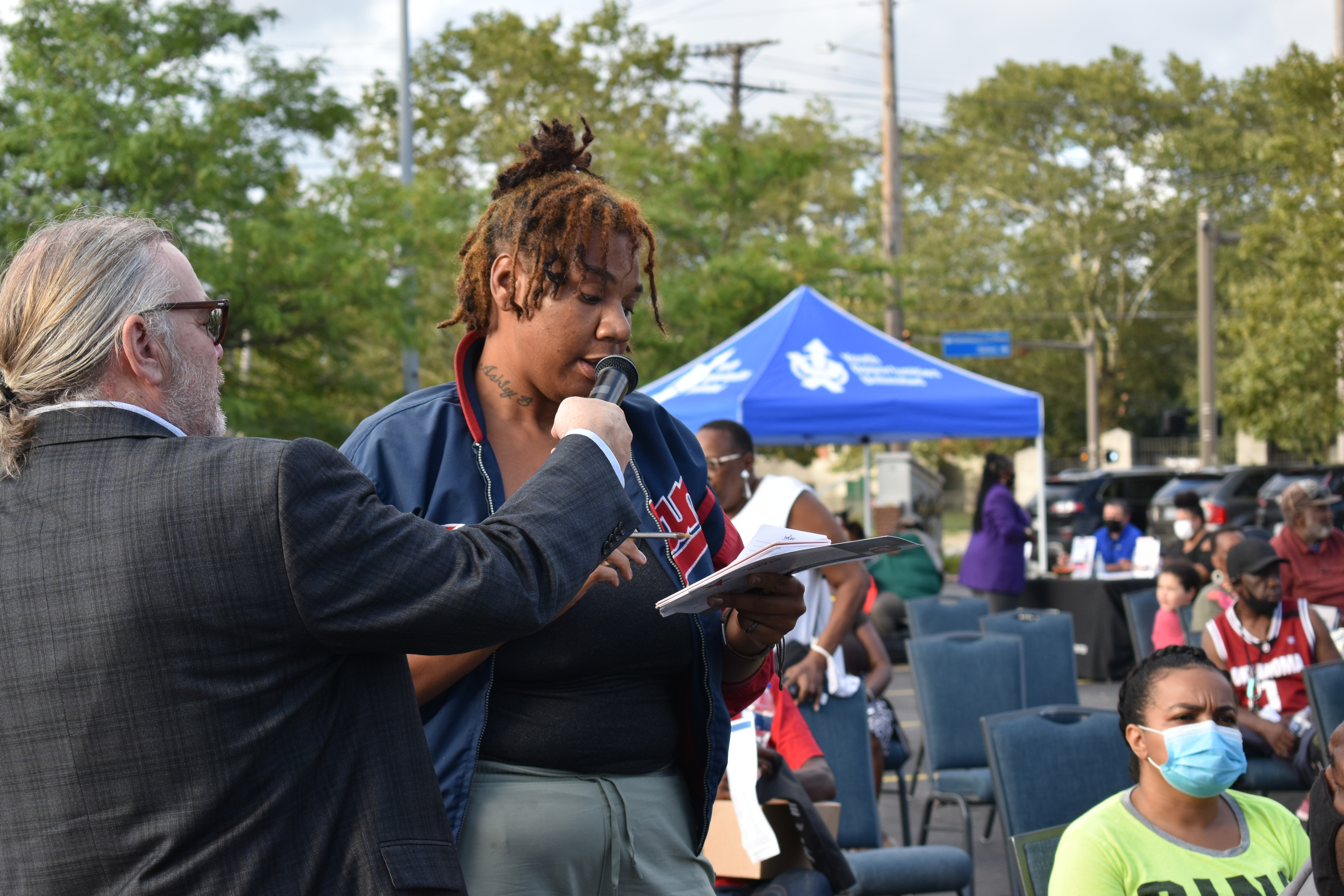 Ashley B., a local childhood advocate who lives in Central, talks about the need for mental health services targeted toward youth in the neighborhood. [Conor Morris]

The “surge” concept is similar to the city of Cleveland’s Neighborhood Transformation Initiative (NTI), in which $65 million in private and public dollars funded mixed-use development in neighborhoods like Glenville. The difference here is the county has not said how much money it will invest in Central, nor announced any private funding. The NTI method has seen some success so far, but hasn’t been without controversy, with concerns about its contribution to neighborhood gentrification.

Budish said the county is “still developing the plan” for where the surge funds will go, which was the reason he and his staff organized the meeting.

“We’re going to surge our county resources into this, your neighborhood,” Budish said. “To do this in a way that will have the most impact on residents, we need to hear from you. We want to listen. We want to engage.”

Still, when news of the Central surge was announced during Budish’s State of the County speech May 20, Budish listed plenty of priorities that already seemed fully formed, including preparing vacant lots for shovel-ready development, working on road improvements, and working with KeyBank on a financial literacy program for residents.

These concepts were not mentioned during the Aug. 18 meeting, which was billed as a way to give residents time to shape the plan.

County Spokesperson Mary Louise Madigan said all of these plans are already in the works.

“Commitments for the funds have been made” for surge projects, and some of that will need County Council approval, Madigan said. She declined to list any specific dollar amounts or any timeline, though.

Burten, Bell, Carr Development Inc., a community development organization which owns Arbor Park Place, the shopping plaza where the meeting took place, was a key part of the event and is a key partner in the surge initiative. Executive Director Joy Johnson said she understands people are frustrated, but noted the meeting was called to get their input for the surge plans.

Regarding Thorpes’ concerns about the grocery store, Johnson had said earlier during the meeting that her organization was talking to a “national grocer” in hopes of luring them to the plaza. The county’s Madigan said the county has a “preliminary commitment” to support a loan to fund renovation of that space for a grocery store. 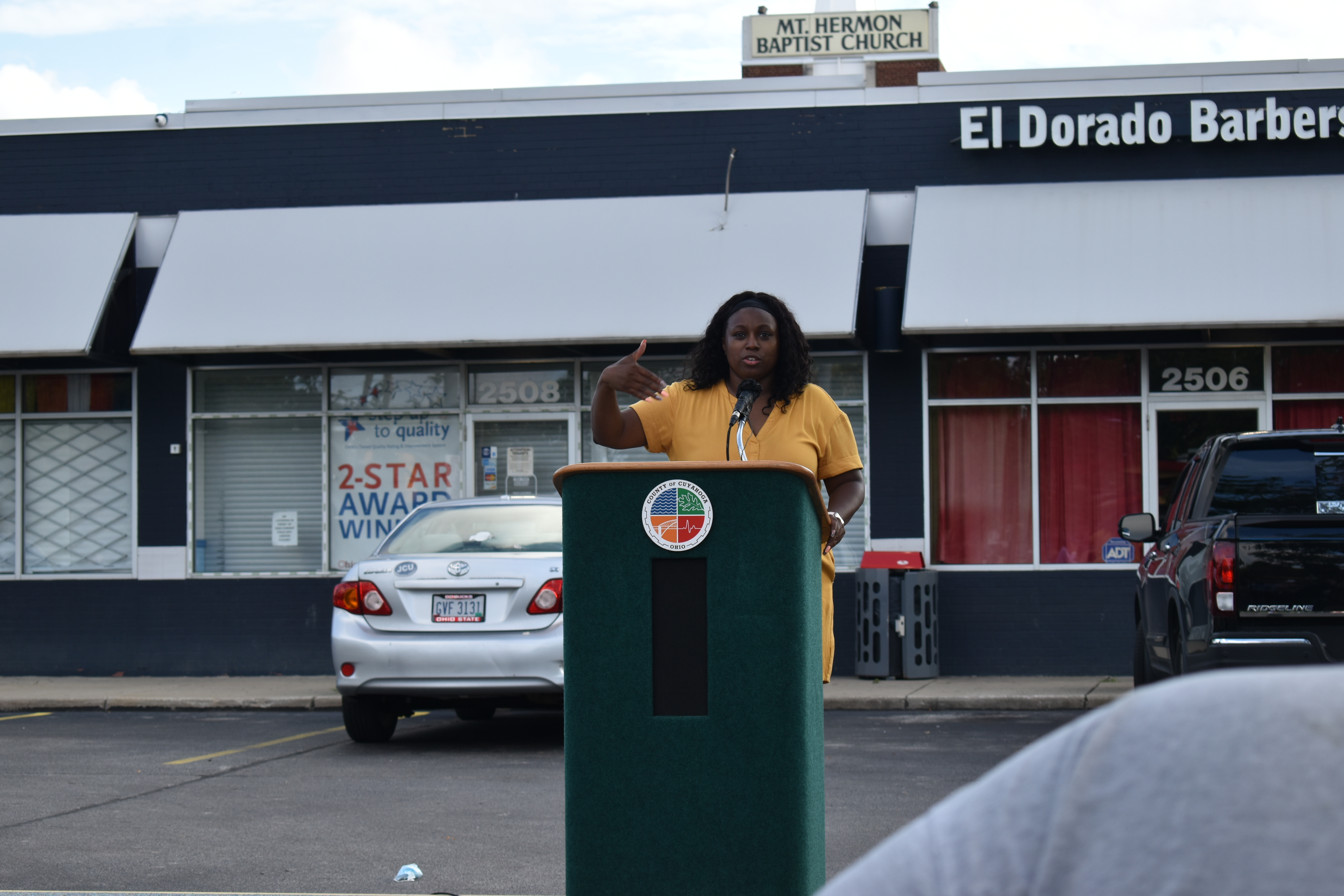 Thorpes added that Black-owned businesses should be incentivized to grow in the neighborhood, a sentiment other residents echoed. Johnson responded that paperwork had been signed for Shay Shay’s Soul Food, a Black-owned restaurant, to move into the plaza.

Meanwhile, Johnson told youth advocate Ashley B. that Johnson and the county were trying to listen to residents’ desires. Ashley B. said services that help young people with mental health conditions are badly needed.

“And when I say mental health services, I’m not talking about bringing in people from Pepper Pike, or from the other side of town,” she said. “I’m talking about people who can really resonate with their issues.”

Yvonne Polk, another Central resident, echoed those thoughts and said children need to learn skills that will help them get a job as they grow older. Otherwise, they’re at risk of turning to crime as a way to make money.

When asked about the residents’ opposition, Budish said the county’s early plans discussed during the meeting didn’t just “come out of the air” and said his office developed them over the last year in partnership with former City Councilwoman Phyllis Cleveland, current Councilwoman Delores Gray, County Council President Pernel Jones, and with “dozens and dozens” of people who live in the community.

Madigan said the idea for the surge came mostly from Budish’s Chief of Staff Bill Mason and said Mason went out into the community to meet with people on “seven or so occasions” over the past year.

Madigan said the county plans to hold more meetings in the near future to gather resident input on what they want out of the surge.

Budish pledged in his speech that the county will reach out to “every small business in Central, with the help of our partners, to hear about how we can help.”

And he told FreshWater Cleveland recently that the county will work on funding programs similar to those suggested during the meeting through the surge, including jobs training and mental health programs. 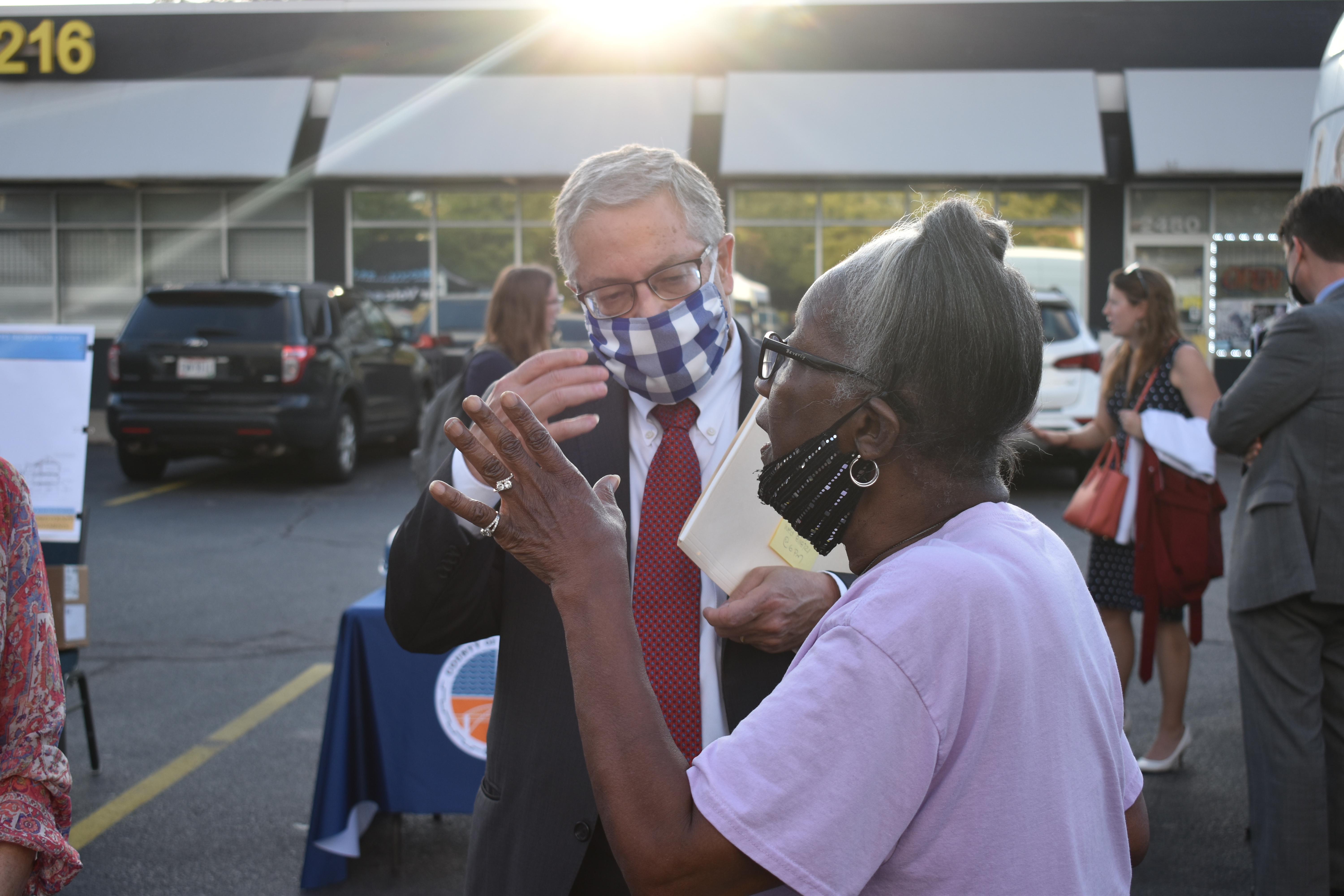 County Executive Armond Budish speaks to a resident during the event in the Central neighborhood. [Conor Morris]

Meanwhile, Johnson said some residents have formed a “steering committee” to further inform the county on the neighborhoods’ priorities.

Thorpes said that it’s hard for local people to get businesses started in Central, adding that he’s heard that commercial leases are too expensive, even for businesses who want to rent from Burten, Bell, Carr in the Arbor Park Place plaza.

Johnson responded that some of the businesses in the neighborhood that have asked about renting the storefronts haven’t had everything in place that her organization requires.

“A lot of people see these vacancies and are like, ‘I want to rent, I want to put my business here,’ and we’re like, ‘OK, show us three months of financials, show us insurance,’ all of that stuff, and they don’t have it,” Johnson said.

Johnson said there’s a disconnect between the small business assistance programs accessed through the city of Cleveland and businesses actually getting that help, a gap that concerns her, and that Budish has said the county will work to address with the surge.

“So now we’re trying to raise that money,” Johnson said. “The unfortunate part is, all while we’re working behind the scenes, the place is still empty, and there’s still no grocery store.”

This story is sponsored by the Northeast Ohio Solutions Journalism Collaborative, which is composed of 18 Northeast Ohio news outlets including WKSU. Conor Morris is a corps member with Report for America. You can email him at conor@thedevilstrip.com.