Since the 1970s, the number of felonies for which a person can be charged in Ohio has been increasing. [Keith Freund / WKSU] The number of offenses for which someone can be charged with a felony in Ohio has increased more than five-fold since the 1970s. And advocates say criminal sentencing remains uneven and tough to navigate. Ohio’s legislators have been passing bills to help people after they leave prison, but little is being done to reduce the number of people heading there in the first place.

There’s little about the implementation of Ohio’s criminal sentencing laws that is standardized across the state. Sara Andrews, the director of the Ohio Criminal Sentencing Commission, acknowledges the state’s criminal justice system is complex, which makes it hard to understand.

"By not only the practitioners within the system but for people who have the occasion to move through the system either themselves or their families,” Andrews said.

And an ever-increasing number of people are moving through that system. Even amid bipartisan calls to lessen a prison population that soared above 50,000 before COVID-19, state lawmakers are increasing the number of felonies and penalties defendants face.

Niki Clum is the legislative liaison for the Office of the Ohio Public Defender.

“We see a lot of bills that seem kind of minor at first. It's just if you assault a referee, increase the penalty. If you threaten the family of a police officer, increase the penalty," Clum said. "But when you start looking at those in the aggregate, we're adding a lot more penalties for the same offenses.”

Jeff Dillon, the legislative director for the conservative group, Americans for Prosperity Ohio, says the increase is substantial and costly.

“Over time this is a vast expansion of government power over the citizens of Ohio,” he said.

Much of the increase is tied to drug offenses, which have gone up by nearly 300 percent. Gary Daniels, the chief lobbyist for the ACLU of Ohio, says over at least the past seven years, drug possession is the No. 1 offense sending people to Ohio prisons.

“That is not the way fundamentally that these types of issues and problems should be handled,” he said. 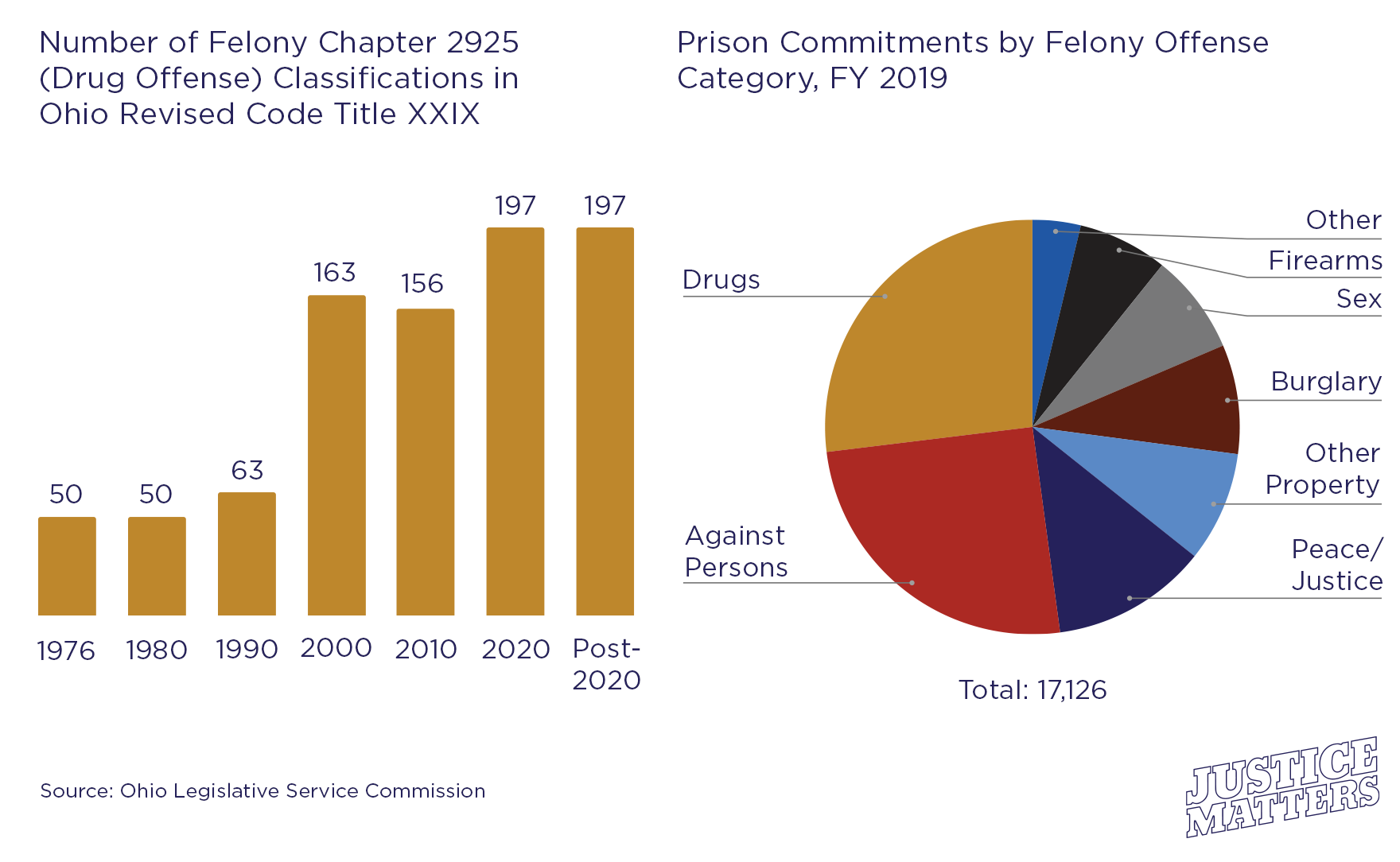 The number of drug-related felonies in the Ohio Revised Code XXIX has increased by nearly 300 percent since the 1970. This has made it the number one offense for which someone could end up in an Ohio prison in the last few years. [Keith Freund / WKSU]

Senate Bill 3 was the latest attempt by some Ohio lawmakers to turn some lower-level drug felonies into misdemeanors. It never got to a final vote. So while Ohio legislators have expanded sealing and expunging, Andrews says that’s not enough.

“You make an adjustment, for instance, to make more people eligible to have their criminal conviction and records sealed. But, we don't address the difficult, complex process to make that happen,” she said.

Lou Tobin is executive director of the Ohio Prosecuting Attorneys Association, which maintains that justice reform conversation needs to focus on public safety.

“We shouldn’t be focusing just on sheer numbers of how many people are in prison. The question is whether we got the right people in prison,” he said.

And, he says, the system must focus on victims rather than offenders.

The prosecutors association also is questioning whether victims will be minimized by a statewide database the Ohio sentencing commission is launching. The voluntary system will compile case details, from race and income to length of sentence, and be available to the public.

“They’re not talking about collecting any information about the victim. Who was the victim? What was the impact on the victim? How did the crime change their life?” Tobin said.

For Kevin Werner, policy director at the Ohio Justice and Policy Center, the goal is to work toward more uniform sentencing across the state.

“Having that data is incredibly important if we want to have the kind of system that is, if nothing else, it’s going to be fair, and outcomes [and] sentences have nothing to do with a person's extralegal factors,” he said.

Pennsylvania adopted such a system four decades ago.

Other states offer other models for reform. Jeff Dillon of Americans for Prosperity notes that Oklahoma cut its prison population by nearly a quarter by changing drug sentencing.

"If deep-red Oklahoma, if this is [a] palatable policy for them to pursue there, then, you know, I don’t think it’s as politically scary as some people make it out to be,” he said.

Last year, as COVID-19 swept through Ohio’s 17 prisons, which had the third-highest number of pandemic-related deaths in the nation, Ohio allowed emergency releases. That cut the number of prisoners to below 45,000. Now advocates are hoping changes in sentencing laws and practices will keep the numbers lower and the penalties uniform and fair.