Community
Sound of Us
The Sound of Us initiative tells the stories of the people of Northeast Ohio.

For two Cleveland men, chess is both the 'game of life' and the game of friendship

Archie Williams, 80, and Edward Dial, 57, have known each other since Dial was a child. They often meet in Cleveland's Public Square to play the game they both view as a microcosm of life.

They spoke to Xeaiver and Ideastream Public Media's Justin Glanville as they played a match.

Xeaiver: I love chess. I'm a student of the game, though. I don't know much.

Archie: Don't worry about it, he [Edward] don't either. [laughs]

Edward: I'm anticipating the next move, that's what I'm doing. I'm making him do what I want him to do.

Archie: That's what he he believes. [laughs]

Justin: Would you guys tell us a little bit about the story of how you met? I know you said you've known each other for 45 years.

Archie: He used to run with one of my sons when they grew up together across the street from each other.

Edward: Yeah, we lived on the same street. We grew up in a community where everybody mostly cared for everybody.

Xeaiver: Archie, what was it was like seeing him grow up and become a man.

Edward: I grew up on Hough in the 60s and the 70s. So that's self-explanatory. [Note: Hough Avenue and the surrounding neighborhood was the site of racial tension that escalated to violence in 1966.]

Justin: What does the game of chess mean to you guys?

Edward: It is the game of life for me because if you don't have a strategy, you don't know what you're working with, then you won't know how to work it. This is more like boxing. It's me against him. Can't nobody help him. Can't anybody help me.

Archie: This is the only game that you will find that has no luck involved in it. None whatsoever.

Edward: All it's about is whoever makes the first mistake.

Edward: Yes, it has. Because of the things that I've been through. I've been through a lot of trials and tribulations dealing with my life, you know? In order for me to live the life that I live, I have to strive. And if I don't strive, it won't get done.

Xeaiver: Do you feel like you've ever had easy moments?

Edward: I couldn't really state that. I don't know what easy is.

Xeaiver: So being older now, do you feel like you have more people in your corner or no?

Edward: Yes, I have more people in my corner today than I did yesterday. [And] I'm more into self-improvement.

Justin: What has your friendship meant to each other?

Edward: Oh, me and him get into it all the time. I feel like he's like a father slash uncle slash mentor, you know? And then by me not being his child, I'm rebellious. But at the end of the day, we still know that we family.

Archie: We have our differences, but most of them are just petty differences. Because, like he said, I do look like him as my son or my nephew, so it's never going to get out of hand.

Edward: [studies the board] Yeah, that's his game. He won that.

Justin: What happened, how did he win?

Xeaiver: I noticed that when he started taking all your pawns.

Edward: Yeah, well, that's part of the game. I allowed him to get down too far, but that won't happen again. 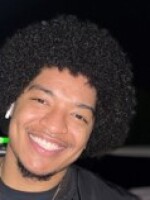 Xeaiver Bullock
Xeaiver Bullock is from from Fayetteville, North Carolina and currently lives and goes to school at Lake Erie College in Painesville, Ohio where he is studying communications and is quarterback on the football team. He will graduate in December of 2022.
See stories by Xeaiver Bullock

Justin Glanville
Justin Glanville tells stories of Northeast Ohio’s people and also helps them tell their own stories through Ideastream Public Media’s the “Sound of Us” initiative.
See stories by Justin Glanville
More by this reporter
Related Stories
Related Content