The new group will manage a four million dollar-plus grant, awarded to the region by the Housing and Urban Development Department last October.

Their goal is to develop a regional sustainability plan that covers housing, land use, transportation, community development, and other economic development issues in 12 Northeast Ohio counties from Lorain, east to Mahoning, and south to Stark.

If that sounds like the mission of so many other groups that have sprung up the last decade, it could be because those initiatives were instrumental in applying for federal funds. But new director - and former City of Cleveland Planning Director Hunter Morrison says; this will build on those initial ideas.

HUNTER MORRISON:
"There are a number of initiatives that exist throughout Northeast Ohio; the business side and the civic side and the foundation side - collaborations between our planning organizations. This is an opportunity to bring them together and to reach out to a public in each part of the region that is concerned with the future, and wants to have their voices heard as to setting some directions that we can pursue for a number of years to come."

The grant is supplemented by more money from the regional Fund For Our Economic Future, and runs for three years...

But Morrison, now Director of the Center for Urban and Regional Studies at Youngstown State, sees a better likelihood of achieving regional cooperation now, because of the tough economy.

MORRISON:
"Hard economic times makes people look at their budget priorities differently, makes the voters more sensitive to how the government's spending the taxpayers' money, and they're asking the question of, 'Can you work smarter here?'"

Morrison says this region was one of 45 nationally to win the grants... and eventually those organizations could share ideas.... seeing if what works elsewhere, might one day work here, as well. 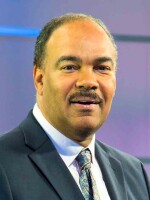 Rick Jackson
Rick Jackson is a senior host and producer at Ideastream Public Media. He hosts the "Sound of Ideas" on WKSU and "NewsDepth" on WVIZ.
See stories by Rick Jackson
More by this reporter
Related Stories