Community
Sound of Us
The Sound of Us initiative tells the stories of the people of Northeast Ohio.

As COVID-19 treatment changes, patients and providers scramble to keep up

This story is part of Ideastream Public Media's latest Sound of Us series, featuring the voices of Ideastream's Summer 2022 interns.

My brother Pearson graduated from high school at the beginning of Memorial Day weekend.

Pearson has struggled with reading and speaking throughout his life. This year, he was a graduation speaker and read a poem to his graduating class. I was so proud.

But the excitement soon turned to chaos and worry. The next day, Pearson called to tell me our stepdad, Ralph McGreevy, had tested positive for COVID-19.

Ralph has pre-existing heart and lung conditions that make a COVID-19 diagnosis especially concerning. Upon receiving his diagnosis, he tried to contact his regular doctors at the Cleveland Clinic to get a prescription for Paxlovid, a time-sensitive medication that might lessen his symptoms and keep him out of the hospital.

He was unable to reach any of them, so Ralph scheduled a telehealth appointment instead.

“I ended up with a doctor [out of state]," Ralph told me later.

After a brief interview, the doctor told Ralph he qualified for Paxlovid, but that the doctor was not authorized to prescribe it.

Instead, the doctor recommended that Ralph go to the emergency room. On the way there, my stepdad called and was told the emergency room could not prescribe the medication, either. He felt stuck and began reaching out to friends and family for help.

My mom, Holly, reached out to my friend Sophia Arambula, a pharmacy technician. She was able to get Ralph an appointment to see the pharmacy clinic’s nurse, who tested him for COVID-19, asked him questions and then prescribed the Paxlovid. The prescription was filled at the pharmacy next door. It only took a couple of hours.

Arambula began working as a pharmacy tech in March 2020, when the pandemic started. She said she understands the confusion and frustration that doctors, nurses, pharmacy technicians and patients are facing.

“I think there’s too many people and they’re overworked,” Arambula said.

She added that treatments such as Paxlovid are so new to doctors that many are still learning to follow protocols regarding its administration.

“They’re following a guide on how to prescribe that stuff and we have to make sure it's safe," she said. "So they're trying to figure it out with everybody else. It’s really hard.”

Rules about telehealth can also create complications, according to Steven Shook, a neurologist and the lead for virtual health at the Cleveland Clinic.

“There's a risk when people seek care, [there is] fragmentation," Shook said. "You know, the right hand doesn't know what the left hand is doing.”

Then there are accessibility issues. Some patients — including the elderly, disabled and those without Internet access — are uncertain how to make telehealth appointments.

That point was brought home to me when I recently tried to help my grandmother, Michele Ruf, set up an appointment through a pharmacy website. She struggled to navigate the online scheduling portal.

Telehealth has been a godsend for many during the pandemic, often being the only care some could receive prior to vaccines and medications. But my family’s experiences showed me telehealth does not replace in-person care, and that clearer protocols are needed for both caregivers and patients.

More than two years into the pandemic, and with infection rates rising yet again, we’re all still trying to figure out how best to treat people who contract the disease. 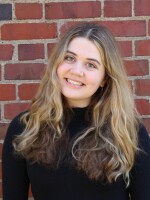 Isabella Keller
Izzy Keller is a Summer 2022 News Intern at Ideastream Public Media. She is a rising senior at Ohio University majoring in journalism and minoring in political science. Izzy is a proud northern Ohioan, hailing from both Cleveland and Huron.
See stories by Isabella Keller
More by this reporter
Related Stories
Related Content