Are School Shootings Becoming More Frequent? We Ran The Numbers For our purposes, we’re defining a school shooting as an incident in which there is an active shooter on school property, using the FBI’s definition of “active shooter”.

The FBI defines an active shooter as: “An individual (or individuals) actively engaged in killing or attempting to kill people in a populated area,” no matter the number of victims. The FBI excludes drug or gang violence and “accidental discharges of a gun.” In our definition, we also exclude incidents typically defined as domestic violence.

Using the Guns & America definition, we turned to the CHDS – K-12 School Shooting Database, maintained by the Center for Homeland Defense and Security, which gathers “each and every instance a gun is brandished, is fired, or a bullet hits school property for any reason, regardless of the number of victims, time of day, or day of week.”

Guns & America analyzed data from the CHDS – K-12 School Shooting Database, April 1999 through May 2019, filtering out situations that did not fit our definition of school shooting explained above.

You can read more about the methodology here.

Since 1999 — when the Columbine High School massacre occurred — there have been 68 school shootings.

In recent years, the average number of days between school shootings has been decreasing.

Then, on Dec. 14, 2012, 27 people were killed at Sandy Hook Elementary School in Newtown, Connecticut. Since Sandy Hook, the United States has not gone more than 231 days without a school shooting. 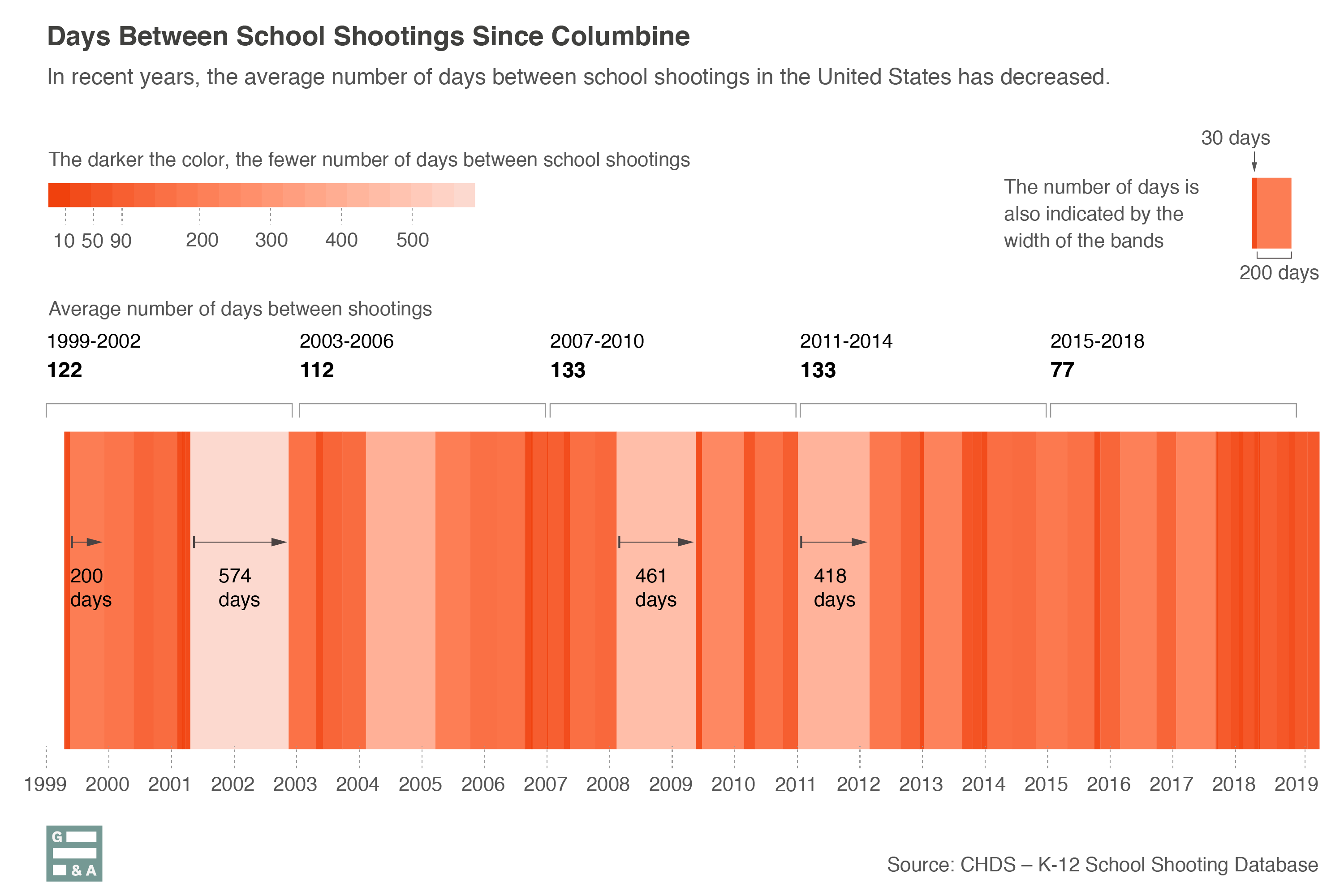 The average number of days between school shootings in the United States from 2015 and 2018 was 77 days.

Guns & America’s analysis of the the CHDS – K-12 School Shooting Database included filtering out incidents that occurred outside the school perimeter and those that didn’t happen during school days or during some other activity like sporting events.

The 68 school shootings were found among 486 incidents of firearms at schools within the 20-year period.

Guns & America used data from the CHDS – K-12 School Shooting Database, produced and maintained by the Center for Homeland Defense and Security. This database collects “each and every instance a gun is brandished, is fired, or a bullet hits school property for any reason, regardless of the number of victims, time of day, or day of week.”

The original database collects records from 1970 to the present.

In the analysis, all firearm incidents occurring outside the school perimeter, as well as those that didn’t occur during school days or during other organized activity in the school (for example: concerts, plays, sporting events), were filtered out.

The Center for Homeland Defense and Security database research ranked every event from 1 to 5, with 1 being less reliable and 5 more reliable. Guns & America discarded firearm incidents that were defined as 1: “Independent Single Author/Moderator Blog, report/list lacking citations, or cited source cannot be located (e.g., newspaper headline title and story does not appear in searches),” as defined by the researchers.

Guns & America also excluded from shooting fatality counts any perpetrator who was killed or died by other means during the event. Victims who were killed in a location other than a school, but on the same day, by the same perpetrator, were also excluded.

Ex: In the case of the 2012 shooting at Sandy Hook Elementary School in Newtown, Connecticut, 26 victims are listed, excluding the perpetrator and his mother, who was killed at her home.

You can explore the full dataset used by Guns & America here.