There are two Republican-backed bills that state lawmakers are considering targeting how racism, history and public policy are taught in Ohio schools.

These bills come as Republican candidates have been calling for a ban on what they call “critical race theory” in the classroom, and urging supporters to push for that with school board members and legislators. But opponents are pushing back at these bills as vague, simplistic and dangerous.

One of the two bills would prohibit K-12 schools, colleges and universities and state and local governments from teaching what it calls “divisive concepts” on race, color, nationality, religion or sex. Co-sponsoring Rep. Adam Holmes (R-Nashport) said it corrects a curriculum in Ohio’s schools that he calls growing and concerning.

“This curriculum does not challenge students to think critically, or inspire them to embrace their individualism in our society. Rather, it attempts to imbue them with the notion that they are either oppressed or the oppressor,” said Holmes.

The other similar bill is focused only on K-12 schools, sponsored by Rep. Don Jones (R-Freeport), who was a high school agriculture teacher for 23 years. He told a House committee in June it would ensure only facts are shared from both sides of issues, and that it would stop what he calls the Marxist ideology in what’s known as divisive concepts or critical race theory.

It’s been repeatedly noted that critical race theory, which examines structural racial inequality, is taught in graduate and law schools and not in K-12 schools in Ohio. Sponsors and supporters of these bills have been asked where critical race theory or divisive concepts are being taught. During a committee hearing in June, Democratic Rep. Tavia Galonski (D-Akron) asked Jones about his example of a teacher awarding extra credit to students who wear a shirt from one candidate or cause but not an opposing one.

“Are you suggesting that you’re aware of those practices happening right now, and if so, can you provide to the committee some examples?” Galonski asked.

Jones replied: “I do not have a specific example, but I’m sure if we started doing a deep dive that we probably have found that it has been taking place.”

Some supporters of the bills have said they’ve had trouble getting access to local school curriculum, but there haven’t been any districts or schools identified in connection with the bills. So there are legitimate questions about why a ban on critical race theory is needed.

But it’s become a talking point for Republicans, led by former president Trump, who at a Lorain County rally in June referred to an order he signed banning diversity training for federal workers and contractors that was rescinded by the Biden administration.

“We need a Republican Congress to ban critical race theory. You know, I had it banned through executive order,” Trump declared at the event.

But Scott DiMauro, who heads the Ohio Education Association, the state’s largest teachers’ union, said the broader bill would prohibit requiring discussions about current events or widely debated public policy, and would deny students graduation credit for classes that include a prohibited concept – while it also says divisive concepts must be taught “objectively and without endorsement”.

“These distinctions are open to interpretations and are likely to become frighteningly incomprehensible when taking into account the extreme and draconian penalties the bill will bestow upon students, schools and educators for perceived violations of ‘divisive concept’ prohibitions,” DiMauro said.

DiMauro spoke at a House hearing September 22, which brought written testimony from 225 opponents and several other speakers.

“Ohio should not put teachers in a position where they would need a lawyer with them in the classroom just so they know what they can and cannot teach, nor should it make it harder for state agencies and political subdivisions to address racial disparities,” said Tim Johnson from the Ohio Poverty Law Center.

“I oppose this bill because it represents a dangerously reductive and divisive fantasy of America that is opposed to the complex and diverse reality that we live in today,” said Ohio State University associate professor Richard Fletcher.

“Issues such as the Holocaust, civil rights struggles and Jim Crow laws are not opinion-based and should not be taught in a ‘two-sides-to-each-story’ manner,” said Columbus attorney Rachel Belenker.

And Brandi Baker of Athens said she was moved to form a parents’ group after her daughter’s classmate told her she wasn’t allowed to have Black friends – and Baker was told by school officials that ‘that’s just the way some people around here feel’.

“That’s a problem. That means that the education system is broken and that your teachers and administrators need training,” Baker said as applause broke out. 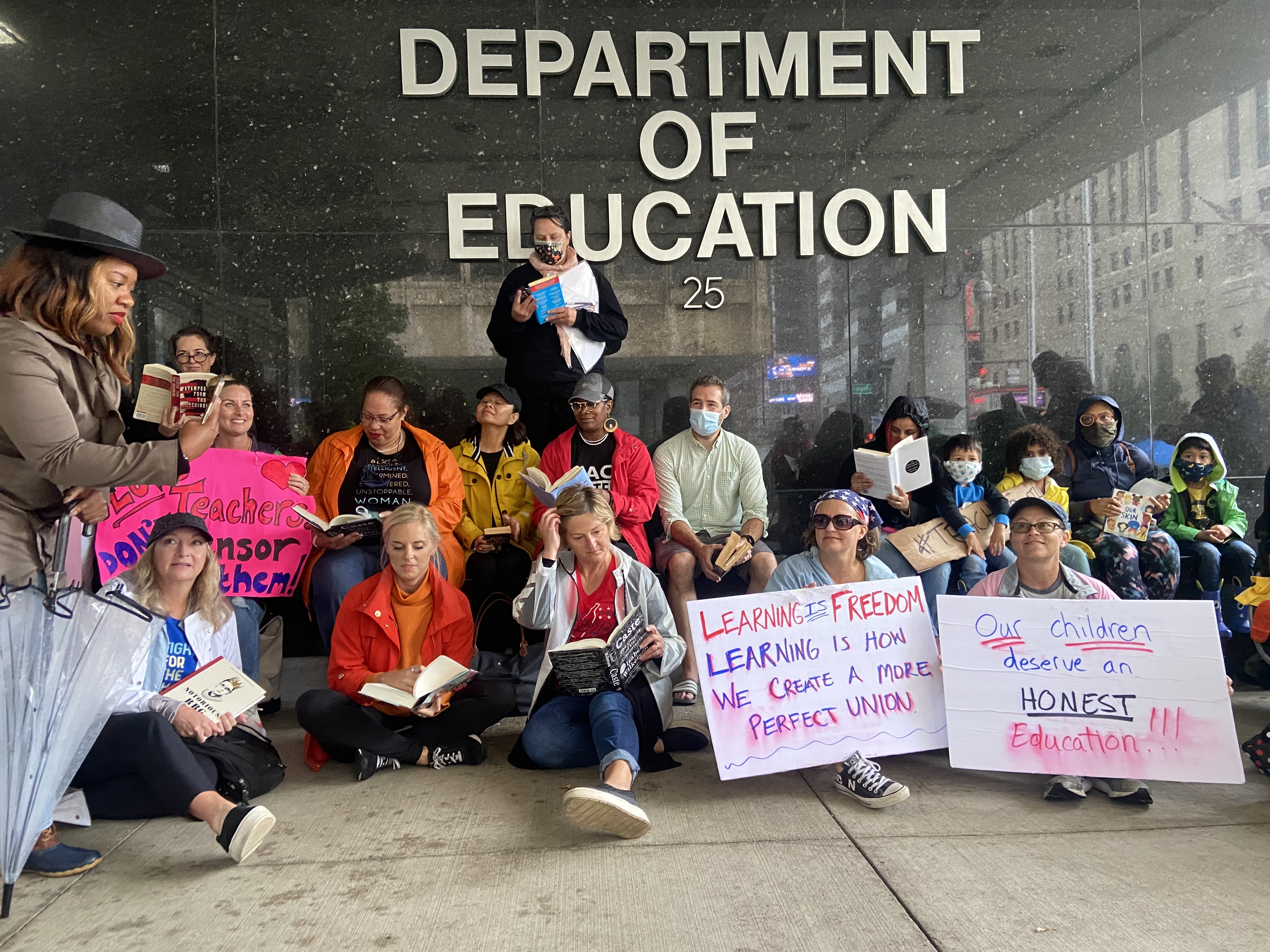 A "read in" was organized by the group Red Wine and Blue to peacefully counter the "critical race theory" protest at the other entrance to the Ohio Department of Education. Attendees brought books by Black authors. Red Wine and Blue is a Democratic-leaning group of suburban Ohio women that also includes women who voted Republican in 2016. [Karen Kasler /  Statehouse News Bureau]

Right wing evangelical groups have joined in the defense of these bills, and several supporters have invoked the words of Dr. Martin Luther King Jr.

“As Dr. Martin Luther King said, we should not be judged by the color of our skin but by the content of our character,” said Jones, when testifying for his bill.

“Rev. Dr. King believed that the Declaration of Independence and the Constitution were promissory note to all Americans,” said Kathy Johnson from the evangelical Christian group Proclaiming Justice to the Nations, when she testified in support of the bill. The Southern Poverty Law Center refers to that group as an anti-Muslim organization.

However, there’s more from that line from King’s “I Have A Dream” speech, which continues: “It is obvious today that America has defaulted on this promissory note, insofar as her citizens of color are concerned.”

Jones’ bill has 27 co-sponsors. The other broader bill, which is sponsored by Reps. Diane Grendell (R-Chesterland) and Sarah Arthur Fowler (R-Ashtabula), has 34 co-sponsors – more than a third of the Ohio House. All are Republicans.