The generation of Americans who fought in World War II is quickly leaving us. Hundreds of World War II veterans die each day. They’re a generation known for selfless sacrifice and humility.

Here's the story of one veteran whose unit saved tens of thousands of lives and then faded away.

In his home in Kent, Bill Anderson II had amassed a collection of books about the U.S. Army unit in which he had served during the war.

Many have penciled notes in the margins, highlighted passages, and a cursive scrawl on the inside cover.

“My father’s handwriting was atrocious," he bemoaned as he sounded out, "… a member of the 23rd Headquarters Special Troops,” otherwise known as the Ghost Army. Bill Anderson III never learned exactly what his father did during the war.  The Ghost Army required members to swear to secrecy, a vow that lasted 51 years. This year the deceptive warfare unit received the Congressional Gold Medal. [Jeff St.Clair / WKSU]

The 23rd was an 1,100 member unit made up of artists, engineers, and radio operators. The 19-year-old Anderson was a telephone specialist.

Their job was to create the illusion of mobile Allied divisions, distracting the Germans so that other units could maneuver undetected.

“The Ghost Army was used to be decoys," Anderson said, "and so they were intentionally putting themselves in harm’s way.”

Modern historians estimate that the Ghost Army's efforts saved the lives of around 30,000 American combat troops.

As the book inscription shows, Anderson’s father remained proud of his service late into his life. A Ghost Army soldier stands in front of one of their rubber replicas of a Sherman tank. The unit would deploy dozens of the fake tanks surrounded by simulated tread tracks and broadcast recordings of engine noise.  The ruse successfully convinced German units that up to two U.S. Army divisions were massing against them. [Ghost Army Legacy Project]

Ghosts on the front

I had met Bill Sr. on the day it was announced that the Ghost army had been awarded the Congressional Gold Medal.

At 97, he was bed-ridden and unable to speak, but he understood when Bill Jr. shouted the news.

“Bill served in WWII in an army unit that remained top secret and specialized in deceptive warfare, utilizing inflatable tanks, trucks, and artillery to mask the true size and location of American troops. They also played sound recordings to suggest troop movements and radio communications were also sent to confuse the German intelligence,” the obituary read.

The unit took part in more than 20 battles during the final months of the war in Europe, from D-Day to the crossing of the Rhine. 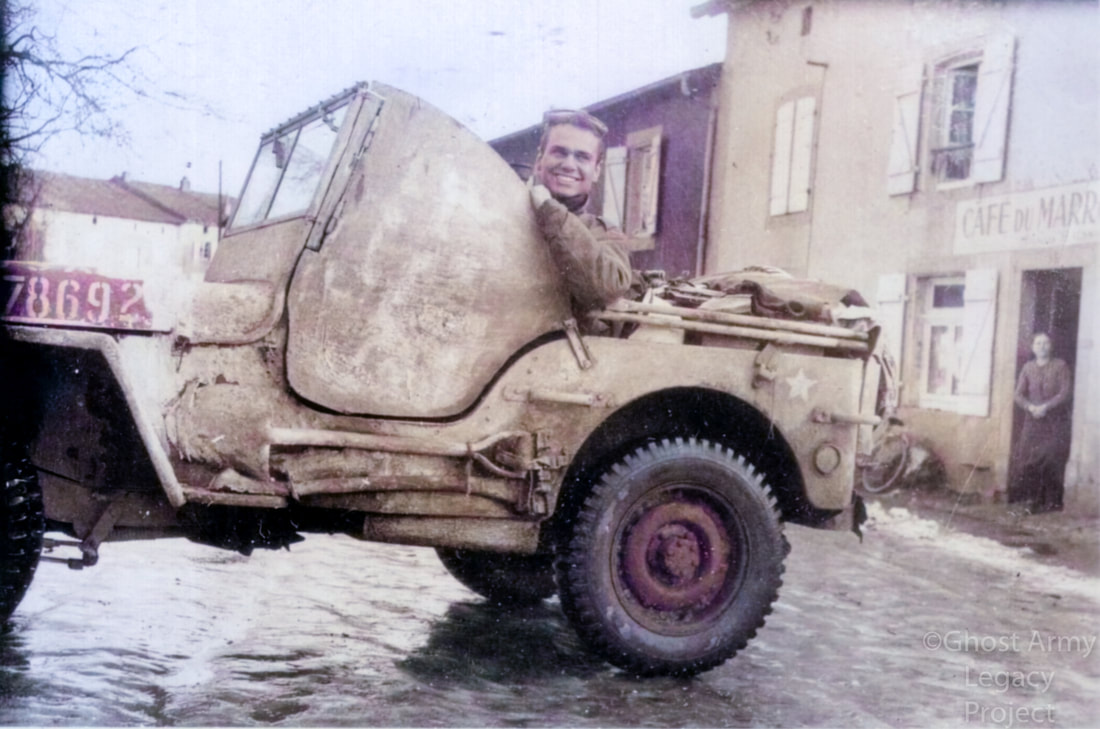 Famed fashion designer Bill Blass was a member of the Ghost Army, which recruited artists, designers, and engineers into its ranks because of their innovative approach to creating battlefield illusions. [Ghost Army Legacy Project]

Army historian and founder of the Ghost Army Legacy Project, Roy Eichhorn, says Bill Anderson played a role in one of the most famous chapters of the Battle of the Bulge, during the German siege of American forces defending the town of Bastogne.

Anderson and another soldier, hidden in an abandoned farmhouse, maintained a phone link between the besieged 101st Airborne Division and the relieving army led by General Omar Bradley.

“These two fellows were in that hole for about two weeks, manned 24/7, surrounded by the Germans,” Eichhorn said.

Their link kept hope alive for the 101st, which led to a turning point in the battle.

Anderson and his companion were eventually relieved and brought before Gen. Bradley. Eichhorn recalled Anderson's retelling of the story.

“He says, ‘I was promoted on the spot by General Bradley himself, to Private First Class.’”

Only toward the end of his life did Anderson share the story with Eichhorn, whose father was also a member of the Ghost Army.

The deception practiced by veterans of the Ghost army was not just for the Germans.

“They were told to keep quiet about everything, don’t even tell your wives and girlfriends and your mom and dad, for 51 years,” Eichhorn said.

The secrecy surrounding their tactics was complete.

“Even the Army lost track of this,” Eichhorn said.

Information about the Ghost Army was declassified in 1996, and Eichhorn says the work then began of documenting their achievements, which culminated this year in the granting of the Congressional Gold Medal. The collection of World War II medals that belonged to Bill Anderson II includes sand from Omaha Beach saved in a bottle with the Ghost Army insignia. Despite the decorations, veterans of the unit were warned not to share with family members any details of their service in the war. [Jeff St. Clair / Ideastream Public Media]

When President Joe Biden made the announcement in February, only 10 members of the unit were left.

Two have since died, including Bill Anderson.

"We’re witnessing, basically, the passing of a generation in front of us,” said Kevin Adams, chair of the Kent State University history department.

Hundreds of World War II veterans, now in their late 90’s, die each day, Adams said, “and there won’t be many left very soon, unfortunately."