Political differences define the new Ohio Board of Education A small wave of new, progressive-leaning board members was elected to the Ohio Board of Education this month, including two in Northeast Ohio.

Democrats see it as a rejection of far-right policies that have been the focus of the state school board in recent months.

But debates over the board's focus may become moot if the recently introduced Ohio Senate Bill 178, a Republican-led measure that would take away much of the board’s power and responsibility, is passed.

Recently elected state school board member Teresa Fedor, a former school teacher and Democratic state representative, is nonetheless fired up about the state of education in Ohio and the impact the board can have.

“The Republicans have flatly failed, on providing that quality education, equity, fair school funding, for 25 years, they’ve done everything but that,” she said.

She was elected earlier this month to the State Board of Education’s District 2, which stretches from Lucas to Lorain county. 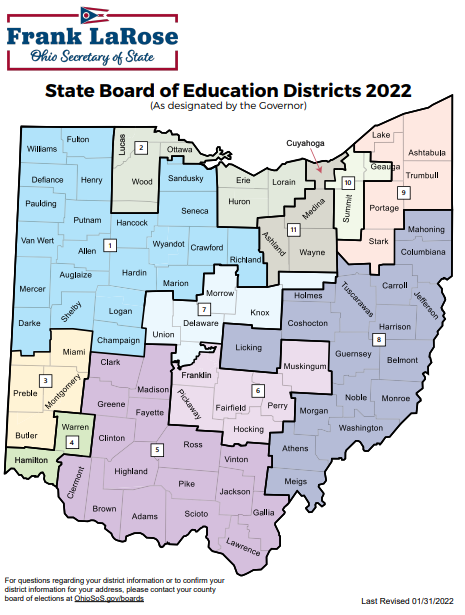 The State Board of Education voting districts that were in place for the November 2022 general election. [Ohio Secretary of State's website /  ]

Despite it being a non-partisan position, the board has become increasingly polarized in recent years, with a conservative-leaning majority voting to rescind a resolution decrying racism in 2021. More recently, conservative board member Brendan Shea introduced a hotly debated resolution rejecting the Biden administration’s proposed Title IX protections for transgender students.

Fedor and two others aligned with the Democratic Party, and supported by teachers’ unions, were elected in November. That means candidates favored by Democrats will have the majority of elected seats in January — seven of 11 — though eight other members are appointed by Ohio's Republican Governor Mike DeWine.

“The voters rejected the extremists and their extreme issues, and I think that’s the main idea here,” she said.

Tom Jackson, a Solon resident who works at an insurance agency and who serves on an advisory committee with Solon City Schools, is another Democratic Party-supported candidate elected this month. He’ll serve District 10, which includes Summit County, half of Cuyahoga County and part of Geauga County. He and Fedor oppose the Shea resolution and say they want to get back to business on more pressing matters.

Republican-aligned board members like John Hagan say the board has been distracted from those important issues because of the Biden administration.

Hagan, a former GOP state legislator who lives in Marlboro Township in Stark County, was re-elected to the board this month. He represents District 9, which covers a wide swathe of the northeastern part of the state from Ashtabula down to Stark County.

Hagan said he, too, wants to focus on getting back to basics, issues like improving test scores and literacy. But he also supports Shea’s resolution, arguing that Biden’s proposed Title IX regulations will cause problems in schools, including unfair contests in high school sports.

The U.S. Department of Education has not yet issued a directive on how the agency might amend Title IX regulations regarding transgender students’ eligibility to participate on male or female athletics teams. Such a directive is expected.

Hagan said he "doesn't necessarily trust the numbers" concerning high rates of suicide and other negative effects for transgender youth who are not affirmed in their gender identity." Those negative effects have been cited by researchers and in surveys and studies.

“I would say that the fact that the suicide rate in that community is high is probably as much about children being confused as it is about them not being affirmed,” he said.

“So I think that you look at a group of people who have some real issues in their life, and they go off on a tangent because of that," Hagan said. "So I don’t know whether that person, if these alternative lifestyles weren’t being put in front of them on a regular basis, whether they would end up there.”

Hagan argues classrooms have gotten too preoccupied with non-education-related issues, saying that some teachers are catering to “odd behaviors in the classroom.”

Fedor said she believes the Shea resolution is an example of the state board of education “bullying” LGBTQ students. And Jackson argued that the resolution is evidence of “outside influences” at play in Ohio, mirroring bills and other legislation proposed in Florida, Texas and elsewhere in the United States.

Fedor said Republicans have failed to provide adequate funding and proper support for public education for decades, electing instead to create a “scheme” to funnel public funding toward public charter schools and private schools through vouchers.

“This failed experiment of the charter school needs to stop,” she said. “We need to have the same quality oversight that we have with our traditional public schools.”

Jackson said he also wanted to see further transparency from private schools and public charter schools that receive tax dollars. Hagan, who said he started his career in the legislature at the same time as Fedor, said the state board doesn’t have much influence on that front.

“She (Fedor) left a body that had some power over that and came to the body that doesn’t,” Hagan said of Fedor.

The state board stands to become much less powerful if the Ohio House and Senate pass Senate Bill 178, the Republican-backed bill that would remove a large part of the school board's powers.

Currently, the school board's purview is limited in scope, but still important, mostly dealing with developing educational policies and goals for Ohio's public schools, approving or denying teacher licensure, approving state standards and curricula, and hiring or dismissing the state's superintendent who oversees the Department of Education.

Republican Sen. Bill Reineke, who sponsored the bill, said in testimony last week that the Ohio Department of Education needs to be overhauled to combat longstanding ills with low test scores and to boost workforce development programs. That can’t be done, he said, without rearranging oversight of the Department of Education.

His bill would move the state board’s powers to a cabinet-level position in Ohio Governor Mike DeWine’s office.

Scott DiMauro, president of the Ohio Education Association, a statewide teachers union, said it’s hard to believe it’s a coincidence that the legislation was introduced just as board members who don’t share the legislature's point of view are set to be sworn in.

“It does seem to be a power grab, you know, and it is disappointing ... especially as you have more people elected to the board who have really strong education backgrounds,” DiMauro said.

DiMauro said he’s not sure whether there is enough time for the bill to get all the debate and testimony it deserves to be voted on before the end of the year, when the legislative session ends.

In terms of other issues of concern, Fedor and Jackson both said they wanted to help schools address teacher shortages and address the learning losses that resulted from the pandemic.

Hagan said he wants to see a bigger focus on students being prepared for the workforce.