OH Really? How to pronounce Cuyahoga Ann Gilmore of Kent wants to know about the correct pronunciation for the name of the river that’s drawn people to this region for centuries. This is actually a question that came up 13 years ago, on June 22, 2009. Then-Ideastream reporter Dan Bobkoff – a New York native – pronounced the river’s name “Cuya-HOG-uh.” NPR anchor Melissa Block did the same. By the next day, listeners, politicians and even NPR Midwest Bureau Chief Ken Barcus weighed-in.

They never came to a resolution.

One person they didn’t ask was John Grabowski, senior vice president for research and publications at the Western Reserve Historical Society and a history professor at Case Western Reserve University.

“One person has traced it back to its Native American origins and claims that it's ‘Cuya-HO-guh,’ not ‘Cuya-HOG-uh,’” he said. “Another story is that the folks on the West Side of Cleveland get into this West-Side-East-Side-divide. I would probably go with ‘Cuya-HO-guh’ because of that little inkling that it does reflect the Native American pronoun.”

Grabowski said that “Cuya-HO-guh” provides a connection to the first people in this region, who were here well before Moses Cleaveland surveyed the area. He nearly named it “Cuyahoga” before surveyors convinced him to name it after himself.

Ideastream Senior Reporter Kabir Bhatia: I mostly grew up in Summit County, but we were midway between Akron and Cleveland. I hadn't heard “Cuya-HOG-uh” until about 15 years ago.

Grabowski: My family is from Cuyahoga Falls, and I kind of slur the middle [syllable] because I'm not sure what my late father-in-law would have used.

We get a lot of new people to Cleveland. That's where it comes in when newbies come, they want to know [how to pronounce it]. However, you macerate it, mix it, whatever, I think that's one of the charms of the name: it will never be nailed down absolutely.

Bhatia: I used to hear commercials for a certain car dealer that were clearly voiced elsewhere and they said “Cuy-YU-guh.”

Bhatia: Yes, let's, and actually let's go back a minute where we were talking about Cuyahoga Falls, which is part of this area called the Western Reserve. We have a question from a listener in Mantua about what exactly is it and what are the boundaries?

Grabowski: The bad joke is, people think Western Reserve is a form of bourbon that is distilled in Cleveland. I think it's rising again in popularity. 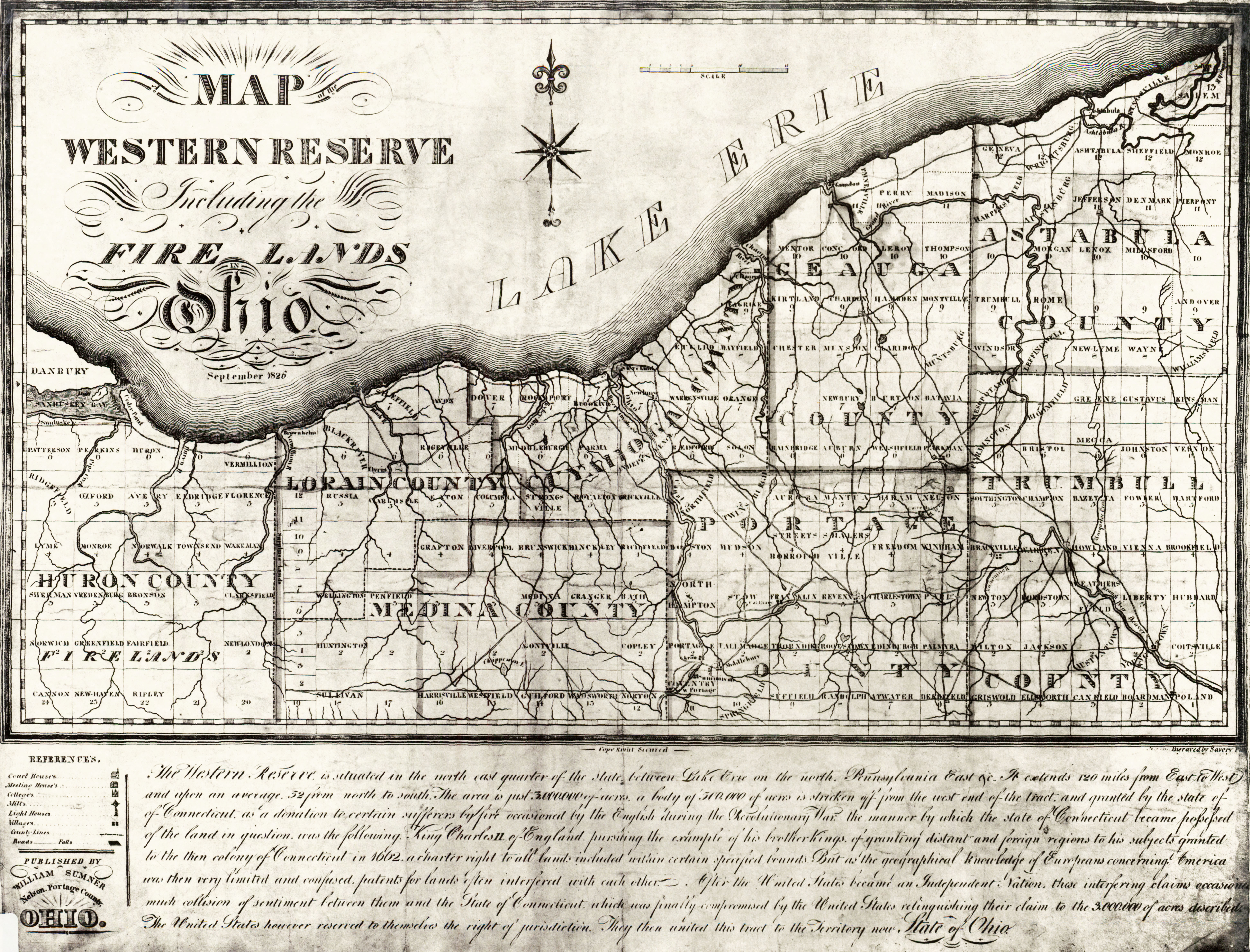 This map of northern Ohio shows the 1826 boundaries within the Western Reserve. [Cleveland Public Library]

Grabowski (continued): It really dates back to the 17th century and King Charles. There was a land grant to the Colony of Connecticut and basically he granted them all the land between two degrees of latitude: from Narragansett Bay to the Great South Sea. So that colony had a strip of land all the way across what we now know as the United States. [There was] no recognition of anybody else having rights to the land, including the indigenous people. To fast-forward, many of the colonies had these trans-Appalachian claims. When the United States was formed, most of the colonies gave up those claims and then that became part of the federal lands. But Connecticut was able to keep part of that claim that was West of the Alleghenies.

Bhatia: Now how were they able to do that?

Grabowski: Certain portions of the claim had been impinged upon by Pennsylvania and New York. It's about 3 million square miles that Connecticut kept as its Western Reserve. That's basically from Youngstown up to the lake from the Pennsylvania line [and] 120 miles to the west, around where Cedar Point is.

Bhatia: So, the area within that - east of the Cuyahoga River - was under Native-American control until the Treaty of Greenville in 1795, and then how was it settled?

Grabowski: The State of Connecticut… did not want a piecemeal sale of the land. They wanted to sell it as a chunk. So, they got a group of investors, formed the Connecticut Land Company, and that's how Moses Cleveland was a member of that consortium. He was chosen to lead the survey here. They surveyed the lands east of the river. It was known as ‘New Connecticut’ and then the ‘Connecticut Western Reserve.’ ‘New Connecticut’ has sort of gone by, but ‘Western Reserve’ is still the name with us. I work for two institutions, Case Western Reserve University and the Western Reserve Historical Society, which reflects not only a piece of land, but initially sort of what I would call the tenor of settlement here, because it was New England. It was largely Protestant and that's why around the Western Reserve lands, particularly to the east of the Cuyahoga River, you'll find public squares, you'll find town squares and it's that reminder of New Connecticut. 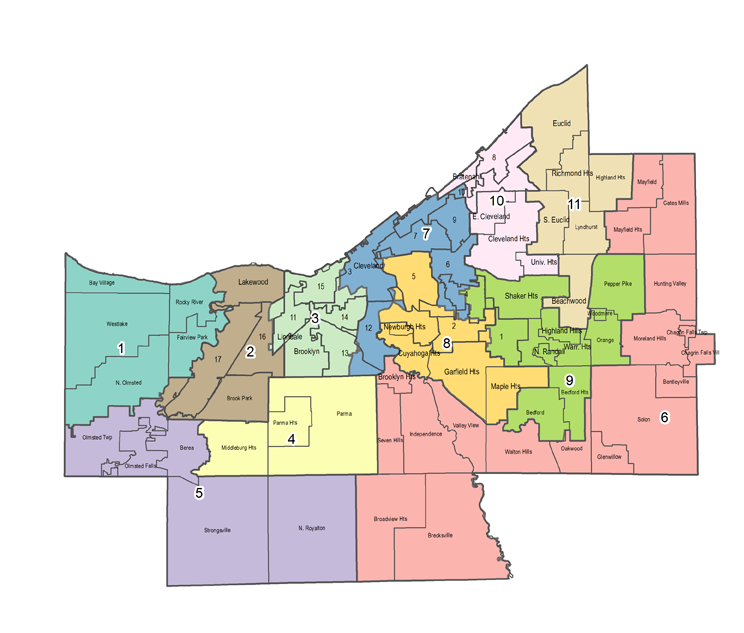 Eric Castle from Shaker Heights asks “OH Really?” why Chagrin Falls juts out from the otherwise-straight eastern border of Cuyahoga County. John Bourisseau, president of the Chagrin Falls Historical Society, said it all goes back to the 1830s, when the land was being settled.

Bourisseau: There was one issue, and that is that the county line actually ran right through the center of town. You had people on one side of town that had to go to Chardon to do their business. People on the other side of town went to Cleveland. You basically had half of the mills in this growing community that were in Geauga County and half the mills were in Cuyahoga County.

Bhatia: And this is when a land swap was proposed, right?

Bhatia: So that’s getting us closer, but then what happened?

Bourisseau: In 1844, they took the new section of what was then Orange Township and took a little section of Solon Township, and they created Chagrin Township. And that's the way the bump occurred.