For 24-year-old singer-songwriter Megan Bouman of New Philadelphia, music has been a way to navigate a spiritual journey.

Bouman performs solo folk-rock as Wreck Like Me, a name chosen as a play on the phrase, “wretch like me,” from the hymn “Amazing Grace.”

She grew up in Michigan but moved to New Philadelphia after high school.

She was accepted into a discipleship program as part of the Branch Church, a non-denominational congregation. 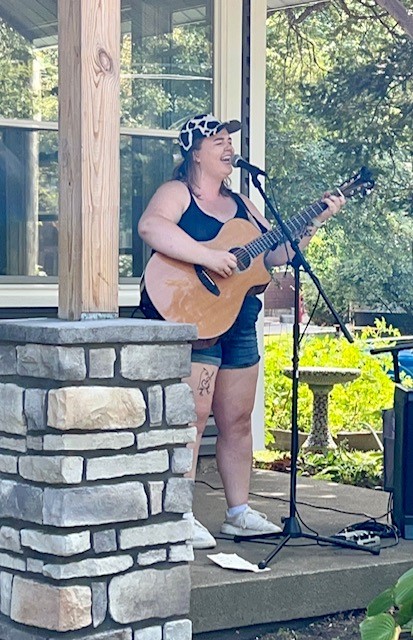 “After a couple of years of being in this program, I was approached by a local music store to see if I could come teach like a couple piano students every week,” Bouman said. “And that has grown into me being able to teach some piano, some vocal lessons, some bass guitar lessons, some ukulele lessons. And like, that's my main job. I work at a local church as well, but that's how I made it to Ohio.”

Bouman’s father is a Baptist pastor, so spirituality was an important part of her upbringing.

While in Ohio, she said she started doubting her faith and began exploring these feelings through songwriting.

“I started writing one of my favorite songs, ‘Letter to My Mother,’ which I took a lot more time and care into writing the words and like the musical parts of the songs. And I think that that's when I kind of got it—why people like to write. And that's when I like, fell in love with writing,” Bouman said.

Bouman said music isn’t offered as a serious career option for many people, so she didn’t pursue creating her own original songs until she was 21 years old.

“Letter To My Mother” was a breakthrough moment along her path as a musician and her spiritual journey.

“I came to Ohio to be a part of the ministry. I work in a church. My faith is really important to me,” she said. “And this song was about me thinking if I, like, lost my faith, would I also lose the people that I love? What would my mom think if I like, lost this?”

Using music to work through her faith

Bouman called that point in her life a “season” of “working through doubt” about her beliefs.

“Anything that involves faith, there's just, like, not going to be a concrete answer. I don't want to believe anything blindly,” she said.

Working through her questioning of faith through songwriting allowed her to open up to her mother and begin having conversations about it.

“I've now come to the conclusion that I do believe the Bible, and I do like genuinely believe these things with my whole heart. This song is really important to me. I think it was so healing for me to write,” she said.

"This song was about me thinking if I, like, lost my faith, would I also lose the people that I love? What would my mom think if I like, lost this?”

When she went through a painful breakup, she wrote her debut album, “Time Goes On,” which came out in May 2022.

Bouman started recruiting friends to round out a full band so she could perform her original songs live.

She said writing songs that resonate with people was when it all “clicked” and she decided to pursue music seriously.

“When I was writing the rest of the album, trying to learn how to let go was so much of what I was learning in my personal life and my spiritual life,” she said. “Writing these songs is like, you have to let go of the past or it's going to suffocate you,” she said.

She said writing her song “Lie Again” was a way for her to process and cope with her emotions during a time of intense anxiety.

The 10-track album highlights Bouman’s throaty vocals bringing the honest and vulnerable words from her journal pages to life.

The songs range from alternative indie reminiscent of Clairo or Soccer Mommy, to more folk-heavy tracks like “Roots” which have a Brandi Carlile Americana sound.

From the page to the studio

“Time Goes On” was recorded with the Blue Winter’s Aaron Troyer and a number of studio musicians. Bouman said she loved being in the studio and toying with her songs until she was happy with the final result.

Although she has only been writing and performing for a few years, Wreck Like Me has gained attention after notable local performances like the 2022 Highland Square PorchRokr festival.

“Writing these songs is like, you have to let go of the past or it's going to suffocate you."

In early September, Bouman released a remix of her song “Time” that juxtaposes her emotive lyrics with beats by Andrew Kaufman.

She said she wants to go on a solo tour and travel to random venues to see if strangers like her music.

“I'm such a small artist that like, the vast majority of who listens to my songs is people who knew me before,” she said. “It's hard to like grow a group of listeners kind of organically, especially with the way that the music industry is right now.”

She said it seems like today’s artists hit it big with a pop song that goes viral on TikTok, but because her music is more emotional indie-folk, it’s harder to get a wide audience.

“I'm fine with those things not happening, but it's super cool to like have people listen to my songs and be like, ‘Hey, this is super cool,’” she said. “I made something that I was so proud of that like, kind of whatever comes out of it, I am excited about.”