A map, based on 2019 data from Ohio's state report cards that gave letter scores to school districts based on their academic performance, compiled by the Bibb administration. This includes public district and public charter schools. [City of Cleveland / ] Cleveland Mayor Justin Bibb last week released the results of a “listening tour” on education in the city, calling it the beginning of an ambitious plan to solve long-time, entrenched issues facing the city's students, educators and families.

Through information gathered through research and interviews conducted with 250 “stakeholders” across roughly 30 listening sessions with families, students and community members and leaders, the Bibb administration made the case in the report that the city needs to rapidly accelerate its pace of progress for students. The report, headlined "Cleveland's Kid's Can't Wait," argues that that rapid progress is needed in a city where one in two children lives in poverty.

The main takeaways for what the city needs, as listed in the report, are: To provide all students the safe and welcoming school and community environment they need to thrive; to develop a plan to ensure all students have access to a “best-in-class” school facility; to strengthen learning so that all students are academically prepared for college or a career; to build on what’s working; and to elevate parent voices to drive progress.

The reports notes that despite significant progress made in the last decade – under the tenure of outgoing Cleveland Metropolitan School District CEO Eric Gordon – students are still struggling to get ahead, with the pandemic especially hurting preschool enrollment numbers, student post-secondary enrollment numbers and young students’ literacy and math scores.

Holly Trifiro, chief education officer with the Bibb administration, said in an interview last week that Bibb has dedicated $20 million in federal American Rescue Plan Act money as the “starting point” to move toward the goals outlined in the plan, which will compliment investments put forward by Bibb toward “violence prevention” in neighborhoods.

Trifiro said that the administration heard a need for a “strong platform” to be created for students to make sure they have the “physical, mental and social-emotional safety” they need to survive. Two other big priorities emerged, too.

Bibb has frequently called for students to have increased access to “high-quality” schools, as set out under the Cleveland Plan developed in 2011 that called for a hybrid model for the city, seeking to support both high-quality public district schools and high-quality charter schools. He calls it “doubling down on the Cleveland plan.”

The listening tour report was funded by $35,000 each from Cleveland Foundation and billionaires Jimmy and Dee Haslam, the owners of the Cleveland Browns, Trifiro confirmed.

Prior to the listening tour, Bibb met with the Haslams in April, who are big financial supporters of charter schools in Cleveland. Former Tennessee state representative and charter school advocate Jamie Woodson, senior adviser to the Haslam3 Foundation, was also present during that meeting.

Trifiro told Cleveland Scene that meeting was an “exploratory conversation” to learn about the Haslams’ priorities in education, and resulted in their financial support for the listening tour.

Woodson is listed as a member of the advisory committee for the listening tour, although that body also included representatives from public schools, the Cleveland Foundation, and two charter schools.

Trifiro said the listening tour, with one of its three key questions being, “Are high-quality public school options available for all students?” was not meant to gin up more support for charter schools versus public district schools.

“If you look at the language of the original Cleveland Plan, one of the core premises is that you need more high-quality schools,” she said. “And so it’s been 10 years and it felt like it made sense to ask this question of how much access to high-quality schools do families have?”

What the administration heard from participants

The administration broke down what it heard into areas of “themes.”

Patrick Britton, a local parent of two children who go to Near West Intergenerational School, who formerly worked with Trifiro in Teach for America, said safety was the number one issue in his listening tour session. It occurred on the city’s near West Side, and while Britton is white and has children in a charter school, the majority of parents at the meeting were Black and had children at varying manner of schools across the city.

“It was the feeling that the neighborhood were not places they wanted their kids to necessarily walk through” to get to school, Britton said, adding traffic safety was another concern.

Common themes cited by the administration were grouped into 12 categories, including:

“Multiple stories were shared of students traveling across the city for hours to access a quality school,” the report reads. 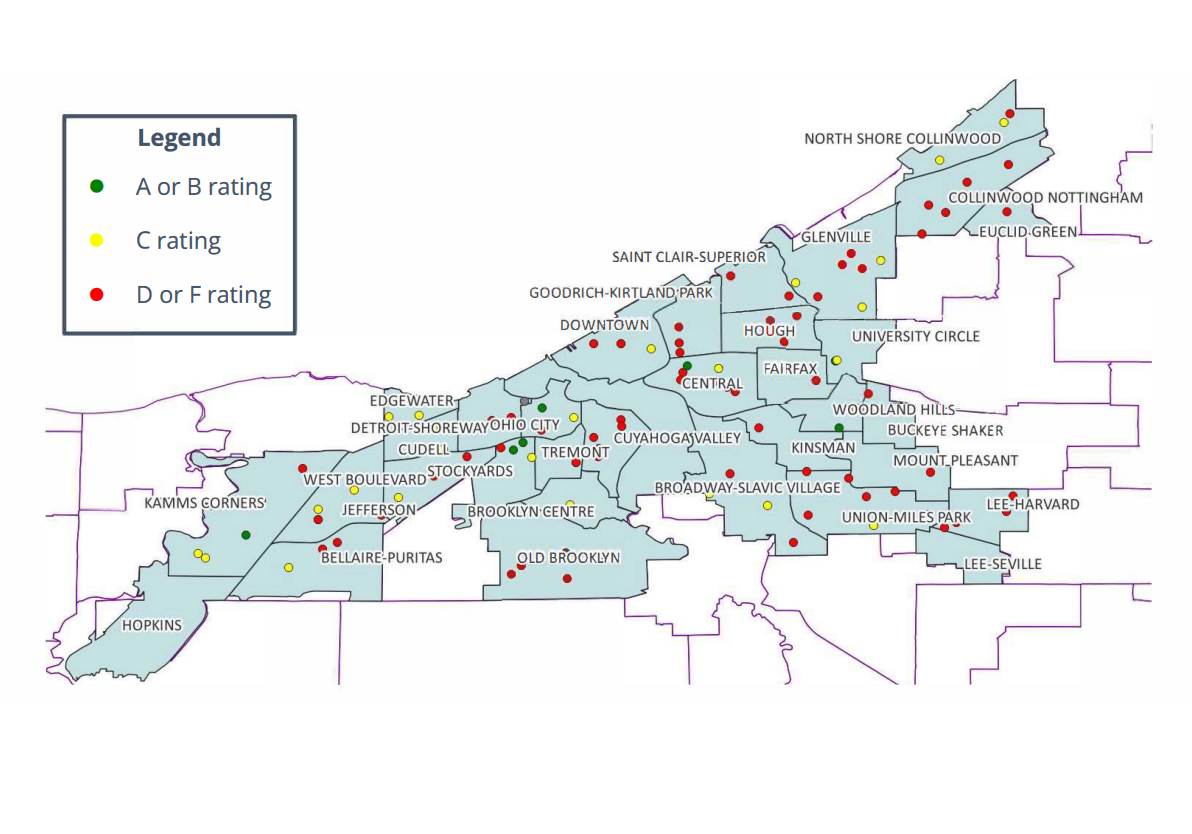 In terms of the priorities outlined by the administration, there were several concrete steps suggested for how to start making progress toward those goals.

In terms of improving physical safety of students, the city noted it will prioritize safe routes to school through its new “Violence Prevention Framework.” Expanding afterschool and summer programming will also keep students engaged after school, with a partnership with Say Yes Cleveland set to help on this metric, in addition to expanded employment and internship opportunities for students.

Students will also need expanded mental health services, with CMSD having significantly fewer school counselors and social workers per-student than the state average, which could be accomplished by partnerships with area organizations and seeking Medicaid reimbursement from the state.

Secondly, the effort to expand the number of high-quality schools in each neighborhood will need a “comprehensive facilities review” as well as a master planning project to build toward improve facilities, although it’s not clear in the report what exactly that will entail, or where funding will come from.

The third priority, strengthen learning for all students, involves a multi-pronged approach. Improved pre-kindergarten offerings are needed, in tandem with additional literacy supports for kindergarten-through-second grade students. The city will also work with the Cleveland Teachers Union and others to lead a city-wide literacy campaign in 2023.

Fourth, in the “build on what’s working category,” the Bibb administration advocated for expansion of the current system under the Cleveland Plan, where parents are encouraged to choose a school that’s right for them.

“To do this, we will explore opportunities to bring innovative school models to more neighborhoods in Cleveland,” the report reads. “We will seek to expand the reach and share the insights of our highest-impact principals and classrooms educators while investing in their continued growth, development and impact.”

The city also advocated for improved communication to parents, and a streamlined single application process that allows parents to enroll in the “public school of their choice” – regardless of if it’s a charter or district school.

The fifth and final priority, around elevating parents’ voices, was far simpler, just calling for “more flexible options and resources to meet parents where they are.” The administration called for more opportunities to hear from parents regularly and engage them in “ongoing dialogue,” but didn’t explain how it would do that.

The city will use the listening tour report to begin to work with partners to develop a plan for how to achieve these goals.

"Throughout the fall of 2022, we will collaborate with partner organizations and stakeholders across the city to create a plan with detailed strategies and aligned resources," the report said.