At the onset of the COVID-19 pandemic in 2020, independent music venues were among the first to close and last to reopen, and many are still finding their footing as restrictions have lifted.

Federal funding has been spent, and the owners and operators of these venues are working collaboratively to keep the music alive in this changing landscape.

Around the country, more than 400 music clubs are participating in Independent Venue Week, a celebration of the stages that bring music fans and performers together.

Over a thousand shows are happening for this year’s celebration, which runs from July 11-17.

Northeast Ohio venues like Mahall’s, Jilly’s Music Room and Westside Bowl are included in the programming, hosting shows that are supported by a national campaign.

The first National Independent Venue Association (NIVA) Conference took place in Cleveland from July 11-12, bringing together NIVA members and others involved in the music industry.

A Canton club closes its doors

Some area music venues have closed, including Buzzbin in Canton, Stella's Music Club in Cleveland and Nighttown in Cleveland Heights.

Julia Bentley, co-owner of Buzzbin, started running the venue with her husband, Chris, in 2019.

One year later, the pandemic shutdown followed by a state-imposed curfew became too much to keep up their lease and other overhead costs with the aging building.

“I did everything I could to keep the doors open,” Bentley said.

It was her husband’s dream as a musician to manage the 100-person capacity venue, which was opened by Mike Nasvadi in 2010.

When the Bentley's took over, they didn’t know of the existing problems in the building, such as health code violations that are just now coming to light, and how expensive necessary repairs would be.

They have two separate leases, one for the adjacent record store, Frankenstein Records, and one for Buzzbin.

The record shop will remain open.

Bentley said it cost $25,000 a month to operate the business.

They received Canton CARES Act funding and a Small Business Administration (SBA) Shuttered Venue Operators Grant, but that money has been spent.

Bentley said crowds aren’t returning to in-person shows like they used to.

“I just think that people got complacent and used to being at home,” Bentley said. “We had to stop serving alcohol at 10. That's what time Buzzbin shows usually started. So, there's just an entire audience that just never came back.”

Buzzbin’s final concert was June 28, and Bentley said it was the biggest they’d ever had. 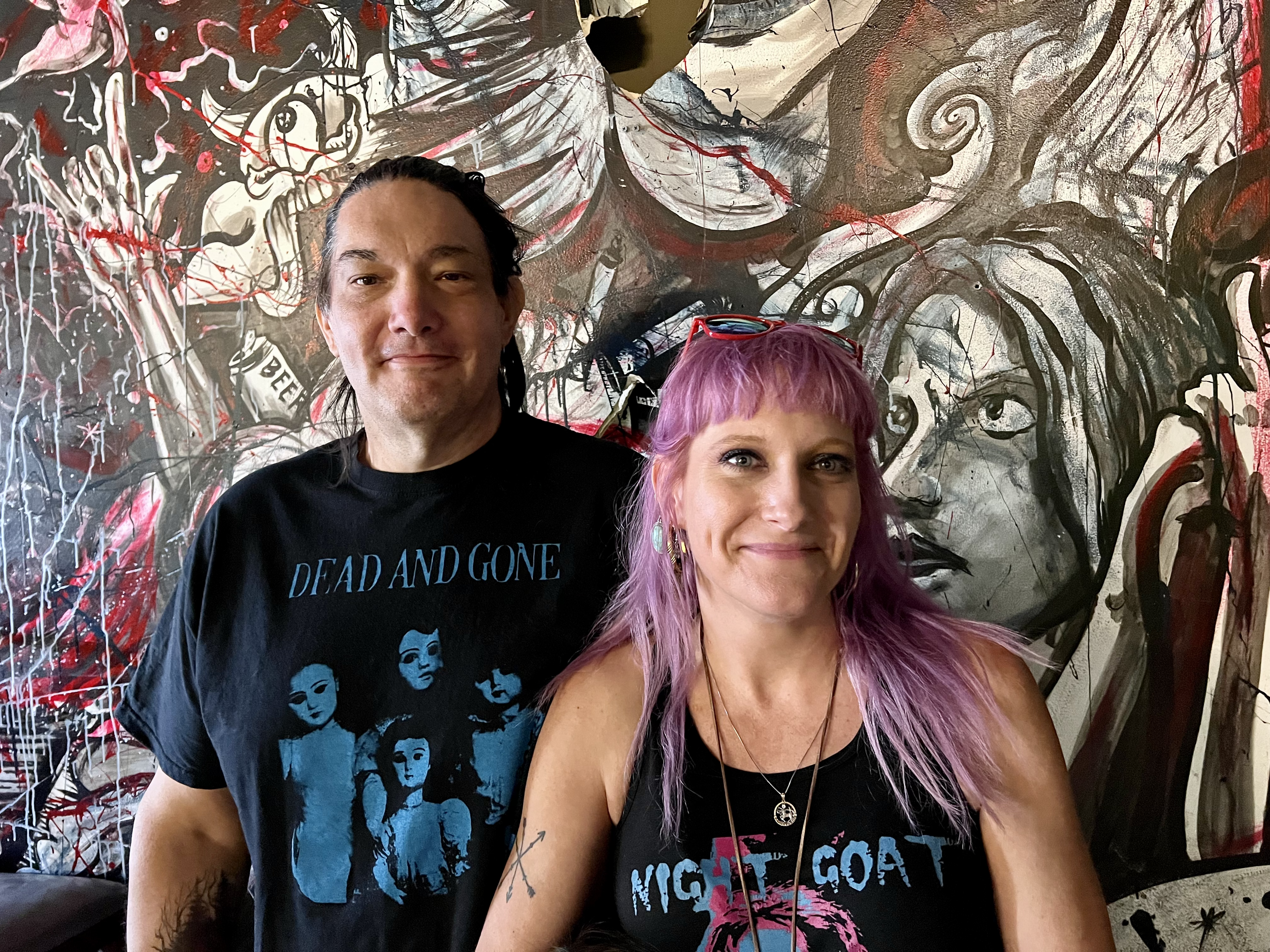 Chris and Julia Bentley took ownership of the live music venue Buzzbin in 2019. They are currently searching for a new location after closing the venue in June 2022.  [Amanda Rabinowitz /  Ideastream Public Media]

Now, they’re looking for a new space to run a music venue, possibly in Akron.

The Rialto Theatre in Akron’s Kenmore neighborhood will lend the Bentley's their venue to host a “Buzzbin Presents” concert on July 30.

All proceeds from the door go to the performing bands and to help Buzzbin finance a new home for the venue.

“I’m kind of like a nomad right now. Like, just looking for where we can plant our feet,” Bentley said. “And I know it's there. It just needs to be in a space that is nurtured by the community in a place where art is the priority.”

Bentley said Buzzbin was a venue where she felt safe as a member of the crowd. With the music venue now closed, she said Canton loses an important piece of its community.

Jason Goodwin of the Canton blues-rock band the Got It Got It Need It attended and played many shows at Buzzbin over the years.

"If you averaged it out, we probably played Buzzbin in one shape or another, at least 40 to 50 times," Goodwin said. "I know it was home to a lot of really cool bands around here. It was also a place where people who were just starting to play music could play."

His band’s first show back from the pandemic was on Buzzbin‘s back patio.

Goodwin said crowds aren’t returning to shows like they used to, and it’s impacting both venues and the artists who play there.

“Put your money where your mouth is. If you're afraid about COVID, wear a mask. If it's still too much, order merch from the bands or merch from the venues. Because a little bit does help, no matter what,” Goodwin said.

Bentley said the local music scene is “very fragile,” and artists have to work harder to engage with their audiences in person.

“Your crowd is very dependent on you,” Bentley said. “So, engage with your fans. Don't sit in a green room. Go have a beer with them. Go find out their name. Work the door so you can see and meet your fans when they come in. Because they're why you're here, right?”

A new model for touring artists

With venues struggling to recover during the pandemic and some fans hesitant to attend in-person concerts, members of the music industry are joining together to find a solution.

“I'm trying to talk to a booking agent and the response is nothing. Not, ‘Hey, that night’s full. Hey, we don't think [you] fit.’ Don't just keep silent. Tell me what we're missing,” Goodwin said.

One organization that is working to help artists and music clubs is D Tour, a network of independent venues and promoters that facilitate national touring for musicians.

The organization started in March 2021 and aims to compete with larger corporations that traditionally have had control over tour routing.

There are nine founders from across the country, from Cleveland and Wichita to Nashville and San Antonio.

Some of these are markets that don’t come to mind as major influencers in the music industry.

D Tour currently works with agents to find the best fit for specific artists and which venues, markets and crowds match their style.

“It's hard enough for artists to get a gig in an unknown city, but let alone finding the right venue if an artist is coming through when they haven't been through before,” Hartke said. “How do you find the venue that fits them the best, that's going to be able to reach out to the portion of the community that will appreciate their art the most?”

Hartke wants to create a more sustainable industry for independent venues, including securing resources that larger companies already have.

“Venues are like communities,” Hartke said. “We can all come together in this one building and just be and have this one experience that unites us.”

The founding venue owners that make up D Tour meet multiple times during the week over Zoom.

They’ve routed two tours across the country, one with the band DURRY and another with Elise Trouw.

D Tour is onboarding affiliates across the country with 100 venues represented in 20 states, working with agents and artists to get tours booked nationwide.

Hartke said they want to keep the relationships going that were formed by venue owners in 2020 through organizations like NIVA.

They want to work together in this “new world” to create more cohesion among independent venues and artists to exist and thrive in.

“Preexisting challenges have just been brought to light. Those things that in the 2010's we were able to sort of bandage together, and those Band-Aids are no longer available,” Hartke said. “I think it's going to allow us as an industry to address those issues and really move past those— and then, hopefully, be a stronger industry because of it.”

“Venues are like communities. We can all come together in this one building and just be and have this one experience that unites us.” - Jessie Hartke

Sean Watterson, co-owner of Cleveland venue Happy Dog, serves as general counsel for D Tour and has been a vocal advocate for independent music venues during the pandemic.

Watterson said D Tour can help venues work together to find the right “fit” for their rooms.

For example, if Happy Dog isn’t the right stage for a particular artist, he can recommend another local venue for that band.

“I think it'll give us access to some shows that we might not otherwise have seen,” he said. “And I say that not just as the Happy Dog, but as all the venues in town.”

He said it also gives him resources that usually only large promoters like Live Nation have.

Happy Dog hosted two D Tour Showcase concerts as part of the NIVA Conference July 11 and 12, featuring nine artists from across the country.

Happy Dog was closed for 15 months, and Watterson said COVID-19 still poses a challenge for the venue.

If a member of the performing band or their crew tests positive, the expected turnout and revenue for that evening is affected.

“If you find out three days before Saturday night that your Saturday night show [is] canceled, it's not like changing the special on the menu. You lose that night,” Watterson said.

Watterson said they’re working on getting government support at the local level.

“What I'm seeing are things like the city of New Orleans just created an office of nighttime economy. You look at Nashville, Tenn., they're creating an office of music and film economy. These are things that have happened in a few cities, but I think it's something we're going to see a lot more of going forward,” he said. 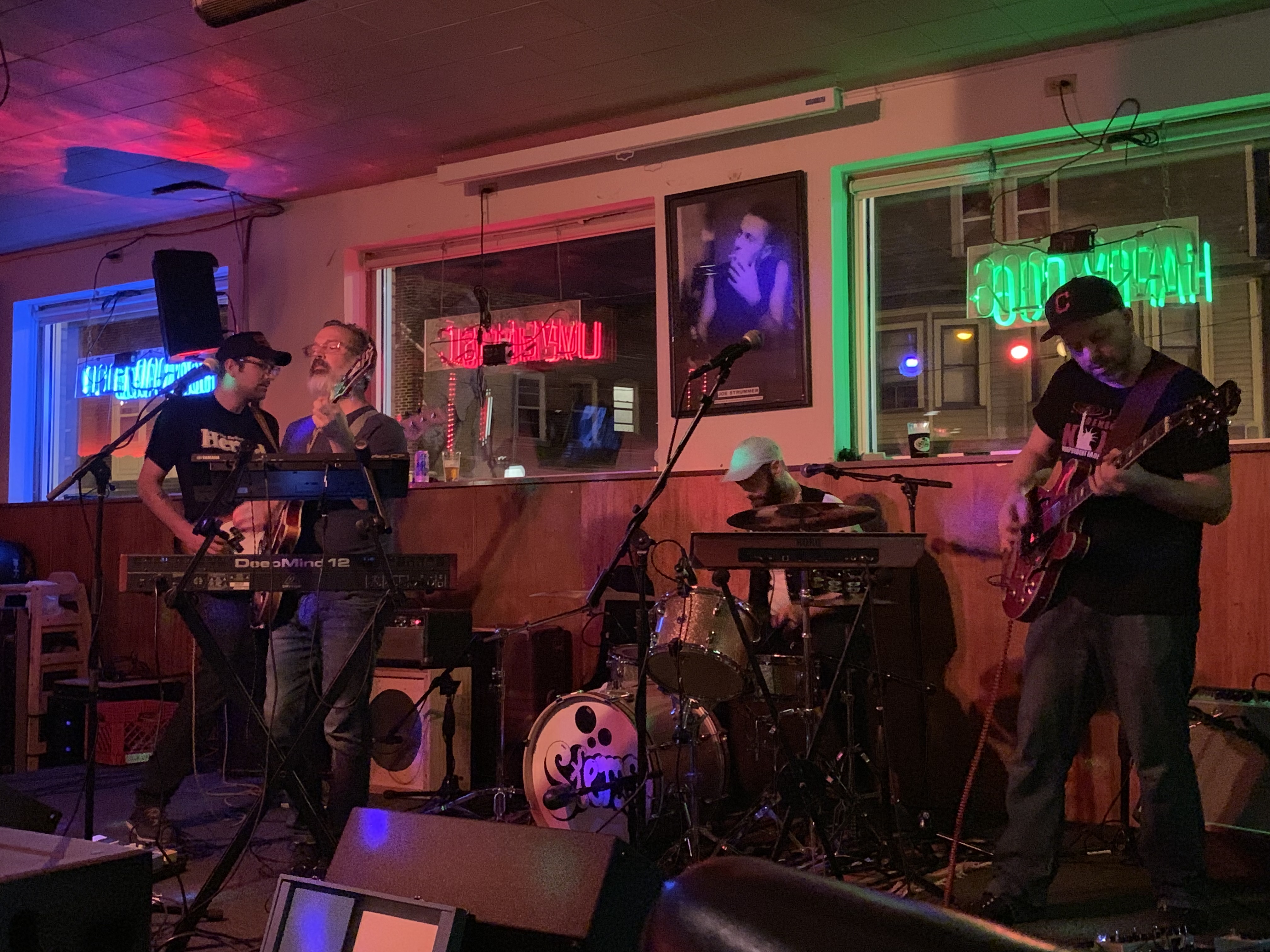 Happy Dog in Cleveland is part of the National Independent Venue Association, which held its inaugural conference in Cleveland in July 2022. [Brittany Nader / Ideastream Public Media]

Jill Bacon Madden, the owner of Jilly’s Music Room in Akron, said there’s been a slower return to “normal” than she expected.

“As we're hit with a little bit of inflation and some other scary things, like an increase in active shooters around, I'm thinking that it's going to take a little bit longer to get back to our pre-COVID numbers,” she said.

She originally thought her venue would be back to its pre-COVID business this year, but now she estimates it will happen through the end of 2023.

“But we're hanging in there. We're doing well,” she said. “We've learned a lot about streamlining. I was able to keep 90 percent of my staff, which has been helpful.”

Bentley said a lot of people reached out to her at the onset of the pandemic showing their support for Buzzbin and their eagerness to return to music venues.

Now that Buzzbin is closed and live music may never look as it did prior to the pandemic, independent venue owners continue to seek community support.

“We regret it when we don't have it,” Bentley said.