For those seeking to stem the tide of evictions in Akron, connecting tenants with legal aid is key Debra Holman (left) was fed up with the poor condition of her public housing unit at White Pond Villa and started asking for repairs to be made in March 2020. Some of the work was still going on when she was at a daylong eviction summit in Akron last month. [Kabir Bhatia / Ideastream Public Media]
News
Kabir Bhatia
May 31, 2022
Government & Politics
News
Kabir Bhatia
May 31, 2022
Government & Politics

There were more than 4,700 evictions in Summit County in 2019. That number dropped sharply during the coronavirus pandemic due to federal moratoriums, but it’s on the rise again this year.

A new report due out soon shows how eviction is affecting residents and highlights what can be done, from a legal standpoint, to help.

It's the result of a daylong eviction prevention summit in Akron, organized by Community Legal Aid and Fair Housing Contact Service. It looked at ways to prevent eviction while empowering tenants who may be living in substandard conditions.

Attendee Debra Holman lives in public housing, which means her landlord is essentially the government. But she said things have not gone smoothly.

“I have vertigo. I’m not supposed to be on the stairs. The elevator went out [and] we have intruders in our building all the time," Holman said. "So everybody went home and I’m stuck down here. I can’t get upstairs. This young man came along and said, ‘Come on, I’ll help you.’ He carried my rollator, and he told me [to] take my time and rest at each landing until I got to the fifth floor. If he had not come along, I would’ve still been down there.”

One solution to an unresponsive landlord discussed at the summit was a tenants’ union. Holman has started one where she lives at the White Pond Homes. She says the amount of time she’s spent being her own advocate is like having a second job.

“When I said, ‘OK you know what? I need to get an attorney. I need to sue HUD.’ Then it’s like, ‘OK, wait a minute.’ I told that lady from HUD, ‘I think that money you abated should come to me for the stress and aggravation I’ve been going through for the past two years.’”

Abatement is a process where part of the rent is withheld pending repairs. Holman said that’s one legal option many people don’t know about. This leads to one of the main remedies cited repeatedly at the eviction summit: legal representation. 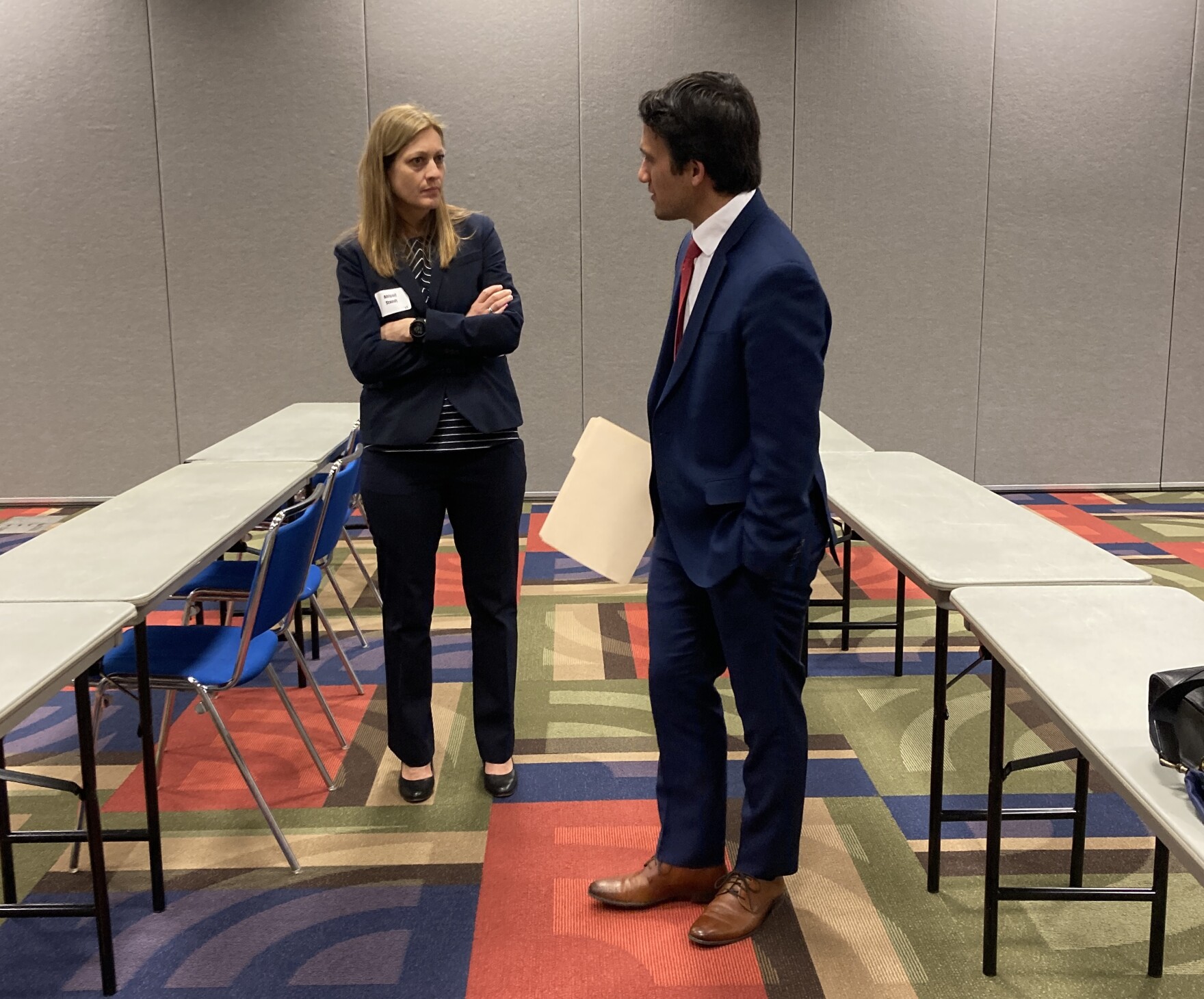 Abigail Staudt with the Legal Aid Society of Cleveland and Akron City Councilman Shammas Malik, who is also an attorney, were both at last month's eviction summit. They were part of a panel discussing how legal representation can help tenants facing eviction. [Kabir Bhatia / Ideastream Public Media]

During a panel on housing equity, legal aid attorneys noted that during eviction hearings in Summit County, about 80% of landlords have an attorney. But for tenants, that number is just 11%.

“In Cleveland the stats were actually worse," said Abigail Staudt, managing attorney with the Legal Aid Society of Cleveland. "It was more like 70 to 80% of landlords were represented, and only 1 to 2% of tenants had representation."

At the summit, she described the situation before Legal Aid partnered with the city of Cleveland and the United Way.

“In 2019, City Council passed an ordinance that would entitle tenants who were at or below 100% of the federal poverty guidelines — and had at least one child living in the household — to the right to an attorney. Now what happens is there's all kinds of outreach to those tenants who have an eviction filed against them to call the free eviction helpline [and] contact us.”

City Councilman Shammas Malik wants the same thing in Akron. He’s also an attorney and was at the summit discussing eviction proceedings in his city.

“Oftentimes what we're seeing is that people actually would prevail on the facts if they had an attorney," Malik said. "And even if they wouldn't, their attorney can help mediate 20 days [or] 30 days so that they can move out and they can find a place and they won't become homeless.”

He describes it as a “win-win,” since it also gives landlords a person to interface with – irrespective of any bad blood that may have built up directly with a tenant. So Malik wants the city to use some of its $145 million in American Rescue Plan funds to do what took Cleveland several years to accomplish.

“For under $1 million we could fund two years of a pilot program that would give legal aid the opportunity to hire staff to actually spread awareness, because actually making sure that tenants are aware of this is a whole other issue.”

A number of solutions

Malik also would like to see Akron and Summit County work together to centralize landlord information in one place. The city and county currently maintain separate lists. He’s also hopeful that an increase in housing inspectors will make it easier for tenants to have issues addressed.

“It’s a matter of basic fairness," Malik said. "Someone should not have to go into a courtroom — [who is] not a lawyer; they weren’t trained in this — and they shouldn’t have to face this thing where they don’t know the magic words that are going to figure out whether they’re going to stay in their home.”

Connecting tenants with the attorneys who know those magic words is key to stemming evictions, according to the report that Akron’s Community Legal Aid will release in June. And Malik is encouraged that Mayor Dan Horrigan and his staff are already exploring how a right-to-counsel program, like the one in Cleveland, might be adapted to Akron.