The end of Roe v. Wade has pushed the fight over abortion in Ohio into new territory, as anti-abortion advocates push to outlaw the procedure and abortion-rights demonstrators hold protests around the state.

Organizers with Cleveland Right to Life celebrated the decision at a news conference outside the city’s federal courthouse Friday afternoon. They spoke into a megaphone to be heard over abortion-rights counter-protesters, who chanted, “Abortion is healthcare, abortion is a right.”

Cleveland Right to Life holding a news conference downtown this hour, using a megaphone to be heard over the chants of several abortion-rights demonstrators. Anti-abortion group says they want to see fetal personhood next in Ohio. pic.twitter.com/xMLUXaIzLe

Republican state Sen. Jerry Cirino called the court’s decision “only the first day of a long road,” as abortion rights will now be in the hands of state lawmakers across the country.

“The protection of a fetus, of an unborn child, will be dependent on geography. And we’re not going to stop working on this until children everywhere, no matter where they live in the United States, that unborn children will be protected,” he said. “Abortion is not healthcare, and it is not a right.”

Ultimately, anti-abortion advocates would like to see Ohio take up a fetal personhood bill, according to Kate Makra, the executive director of Cleveland Right to Life. Such measures seek to ban abortion by granting legal rights to the fetus.

“If you recognize that that pre-born child as a person, anything you do to that would be murder – which it is,” she said. “We understand it’s up to the states, so Ohio has to do its part to make sure that we’re one of the strongest pro-life states in the country.”

Cirino, who chairs Cleveland Right to Life’s board of directors, said he did not support penalizing women who seek abortions.

“We never believe in punishing the mother,” Cirino said. “We believe that we need to do more and more as a society – not just pro-lifers, but as a society – to help mothers who find themselves with child.”

Among the abortion-rights demonstrators who protested the press conference was Matthew Ahn, an attorney and law professor.

“We just want to show that Northeast Ohio and Cleveland really does support reproductive rights and reproductive justice, the right to have an abortion,” he said. “These are things that are fundamental rights.”

Meanwhile, supporters of abortion rights gathered in Akron to grieve and strategize. 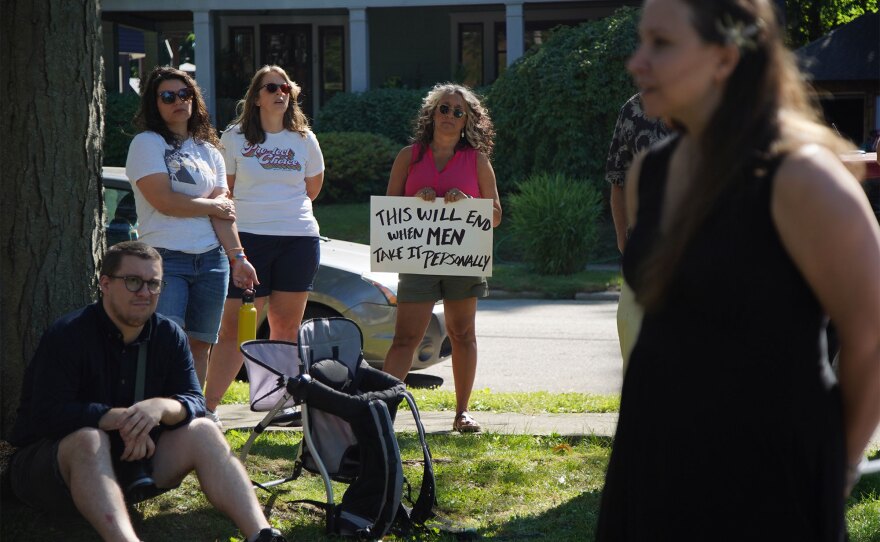 Heather Pollock holds a sign at a rally supporting abortion rights in Akron on Friday.

The mood was mostly somber Friday night at a gathering of about 100 at Swirsky Park in Akron.

Some attendees spoke of their frustrations about the decision and encouraged people to show up to the polls.

Among them was Akron's Ward 1 Councilwoman Nancy Holland, who says council will likely formally declare opposition to the Supreme Court ruling soon.

“Had I any idea that today would be this day, I would have cued something up for Monday. I think you can expect something like that from me, and at least a couple of my colleagues,” Holland said.

Holland invited on Friday morning community members to her residence in the Highland Square neighborhood to talk about their emotions and process their thoughts. Friday's gathering was sparked from those conversations, she said.

Akron resident Sarah Yuronka attended the rally. Choking back tears, she said she was disappointed that the Court overturned decades of precedent.

But she is not giving up hope, she added. Akron resident Leah Heiser isn't either.

“I want everybody to get out there and vote. On a local level, on a state level, on a government level. We have to do something,” Heiser said. “Let’s revisit this, this fall, and let’s try. Let’s make change. This is not right.”

Another community gathering is planned for Monday at Eight Point Bistro in the Chapel Hill neighborhood.

Ohio abortion providers reiterated on Friday that the procedure remains legal in the state. But Iris Harvey, the CEO and president of Planned Parenthood of Greater Ohio, said she expected anti-abortion state leaders to move swiftly.

“People who do not have access to the resources and the support they need to travel out of state may be forced to carry out pregnancies against their will,” Harvey said. “This is a humanitarian and a public health crisis.”

Alana Garrett-Ferguson, the Cleveland organizer for the advocacy group New Voices for Reproductive Justice, said further abortion restrictions could adversely affect Black Ohioans and others who most often lack resources and are hit hardest by poverty.