Cleveland Mayor Justin Bibb knows the city’s schools improved under his predecessor — but not fast enough for Bibb.

He’s aiming high and calling it the “Great Reset.”

“We have to actively accelerate the pace of change inside the district,” Bibb told the 74 last month. “I will consider it a failure of mine as mayor, if in the next decade, we don't improve the quality of learning in our school system.”

To Bibb, that means having more schools highly-rated by the state, better test scores and students who are better prepared for college or jobs. That’s a tough task for a city that’s the poorest in the nation by many measures and where test scores are among Ohio’s worst.

“Having mayoral control of our schools is a special moral obligation for me,'' said Bibb of Cleveland, the first mayoral-controlled school district in Ohio in 1997. “With one out of two of our children living in poverty, having high quality public education is critical to our long term economic competitiveness as a city. “

Whether Bibb’s goal is achievable is an open question. COVID’s damage to attendance, enrollment and preschools will make it hard just getting back to the district's lackluster pre-COVID results.

Bibb is considering options before setting a plan, first conducting a listening tour of the city this summer to learn what families want from the schools and what changes they seek.

He’s even weighing whether district CEO Eric Gordon, who has led the district since 2011, is the best person to guide that work.

“I'm happy with the work that's been done to date,” he said. “And we are evaluating what's going to be important for us to do in the future.”

Bibb also liked Gordon’s enthusiasm for mastery learning — making sure students keep learning skills until they “master” or understand them, rather than pushing them ahead before they are ready.

Bibb isn’t the first Cleveland mayor to call for faster improvement. In 2012, ex-mayor Frank Jackson complained that “incremental” gains by the schools were not good enough. With the district having the second-worst test scores in Ohio, Jackson and Gordon worked with legislators to create a district improvement plan and avoid state takeover.

Since then, despite several changes to state tests, the district has slowly crept closer to average state scores while edging up the rankings. In 2019, pre-pandemic, district scores had risen to eighth from the bottom.

The district has also trumpeted improvements in its graduation rate from just 52 percent in 2010 to 81 percent for the class of 2020 as the main evidence of improvement.

Since 2010, the Cleveland school district has had dramatic increases in its graduation rate — again repeatedly cited by the district officials as evidence of improvement. [Education Forward]

Bibb applauded the graduation gains, but those are not enough, he said.

“I think it's past time you had a different conversation of whether or not high school graduation is a sole metric of how we're measuring and evaluating whether or not we're moving in the right direction,” he said, adding that he wants to see better state ratings of schools and better results on national tests like the ACT and NAEP.

Too few schools receive an A or B grade from the state, he said. In 2019 state report cards, about 10 percent of district schools graded B or higher, compared to 38 percent statewide.

And the district is not preparing students well enough for college, he said, with too few scoring well enough on tests to be considered strong enough to avoid needing remedial classes when they start college. Since 2012, the percentage of district students scoring remediation-free on the ACT rose only from 12 to 13.

“We only improved college and career readiness by just one percentage point,” Bibb said, “That's not good enough for me.

Teach for America has drawn criticism from teachers unions nationally, which believe it doesn’t train recruits well enough before putting them in classrooms. Unions complained when the program started in Ohio in 2012. 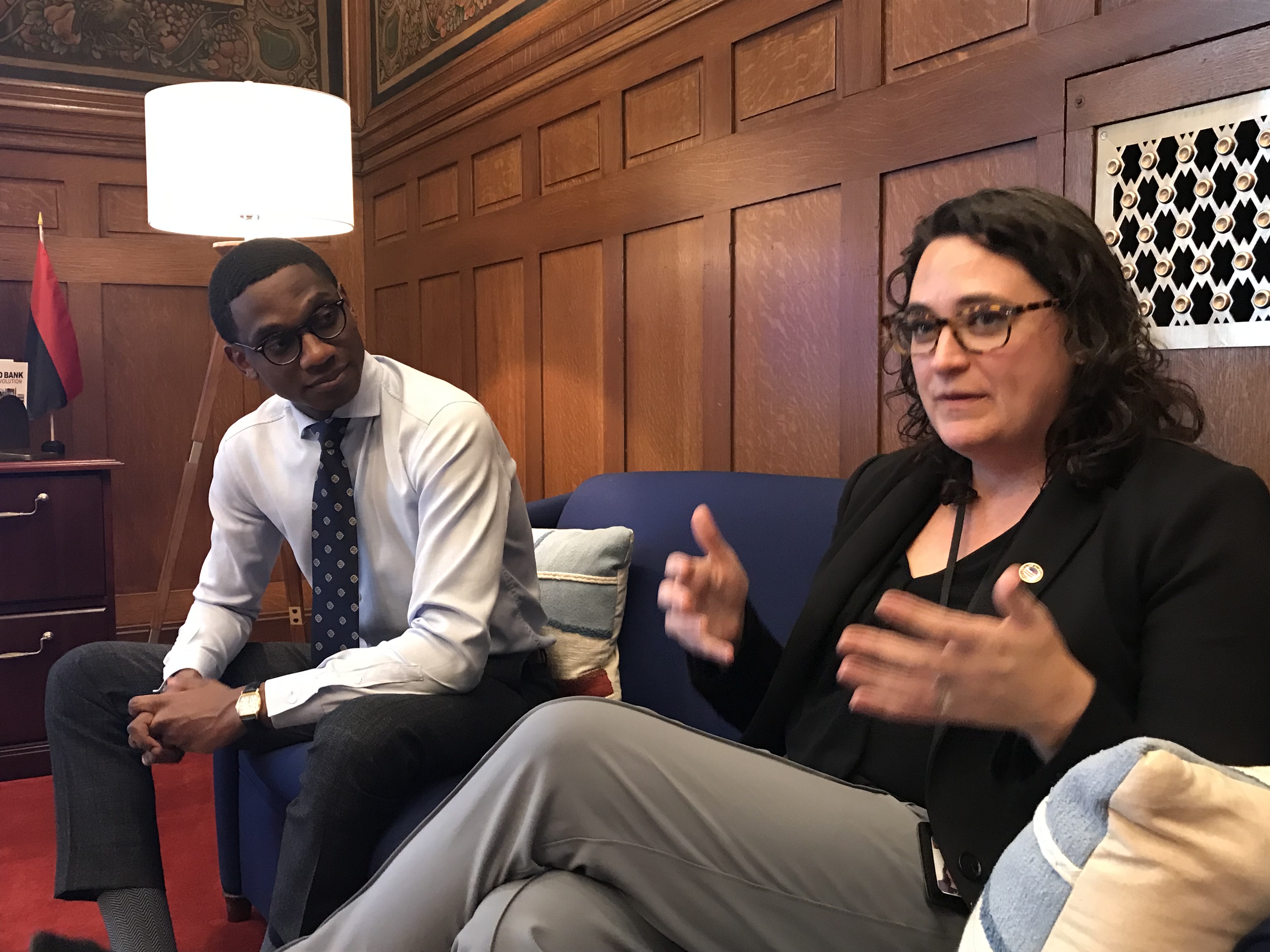 Cleveland Mayor Justin Bibb and Holly Trifiro, his education advisor, talk about the need to improve college and career readiness of students in the Cleveland school district. [Patrick O’Donnell /  ]

But Trifiro, who ran the program in greater Cleveland for eight years before becoming state director, isn’t drawing protest.

Instead, the Cleveland Teachers Union has welcomed her.

Trifiro said the city has to focus on tests like the ACT to see if Cleveland students are keeping pace nationally.

“How does Cleveland compare to the country?” Trifiro asked. “And how do we make this a more competitive city in all the ways that we can?”

Bibb praised the district becoming part of the Say Yes to Education college promise program - in which graduates are guaranteed college scholarships; and he and Trifiro praised the district’s recent launch of a career exposure and preparation program called PACE — Planning and Career Exploration — to better connect students to good paying jobs.

“We hope that PACE is part of the answer,” Trifiro said. “We need to make sure that the business community comes around it and that kids are getting opportunities that excite them and interest them.”

Bibb called PACE and Say Yes to Education “good building blocks” as the city tries to rebound from COVID.

To reach his goals, Bibb said he knows he needs support from companies, nonprofits and residents.

”I don't believe that I alone as mayor, or the schools can solve the problem by ourselves,” he said. “We need everybody in the community to play their respective role.”